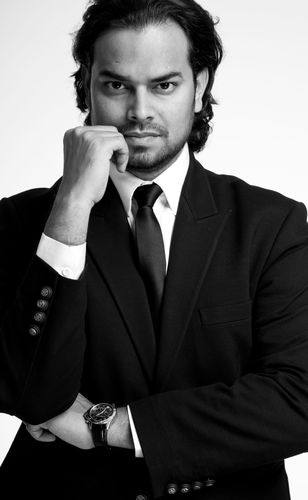 Rahul Mishra would rather have you buy yarn or cloth from the local bazaar and get it stitched by your neighbourhood darzi (tailor) than pick up something off the rack in a mall. “A tailor-made piece of clothing is unique to you and will stay so for a very long time,” says the Delhi-based designer. Mishra holds that individuality is key, and therefore it is no surprise that he is invited as a guest member at the Paris Haute Couture Week (PHCW) Spring/Summer 2020 by a committee of the Chambre Syndicale de la Couture. “Couture is luxury in its highest sense, an outfit designed for an individual according to their body type to suit the occasion,” says Mishra, the first Indian designer to be invited to the PHCW. Haute couture is essentially high-quality, handmade fashion, and only couturiers and houses approved by the committee get to use the designation. Designers, therefore, covet an invitation from the PHCW, which is different from the Paris Fashion Week as it includes ready-to-wear designs, too.

This is not the only first for the 40-year-old though. In 2007, Mishra became the first non-European to win a scholarship to the Istituto Marangoni Milano, Italy, where he did the master's course in fashion design womenswear. In 2014, he became the first Indian designer to win the International Woolmark Prize; previous recipients include Yves Saint Laurent and Karl Lagerfeld.

Much before these laurels came his way, Mishra was far removed from the world of fashion. Hailing from Malhausi, a hamlet near Kanpur, he spent his childhood with his grandparents and studied in a government school before graduating in physics. Destiny led him to the National Institute of Design (NID) in Ahmedabad, where he did his postgraduation in apparel design.

Mishra made his debut at the Lakme Fashion Week (LFW) in 2006, using the kasavu mundu—off-white garment with golden border—in his collection that was “born out of a project on Kerala handlooms”. He reworked the mundu magic at LFW 2009, making reversible dresses using kasavu mundu and banarasi silk. He made off-white a popular colour in Indian wear at a time when bright shades of red, orange and green ruled the ramp.

Mishra wears his karigari (craftsmanship) on his sleeve; all his work is handmade, inspired by ancient Indian design tradition. Yet he is aware that “Indian embroidery and handwork are no longer unique”. These days, he tells THE WEEK, luxury brands like “Prada, Gucci and Dior, too, have Indian craftsmen who do hand embroidery and use Indian weaving techniques on their clothing. So, it is not unique on an international stage any more”.

That is why, for his debut at the PHCW (January 20-January 23), he is creating 3D embroidery designs, using different Indian techniques like zardozi, aari and resham, but which can be machine-washed. “It could very well be a plain slip dress underneath it all, but the surface styling, its shape, structure and flow is what will stand out,” says Mishra, who has showcased his work at the Paris Fashion Week for 10 seasons (Spring/Summer and Autumn/Winter collections) in a row. 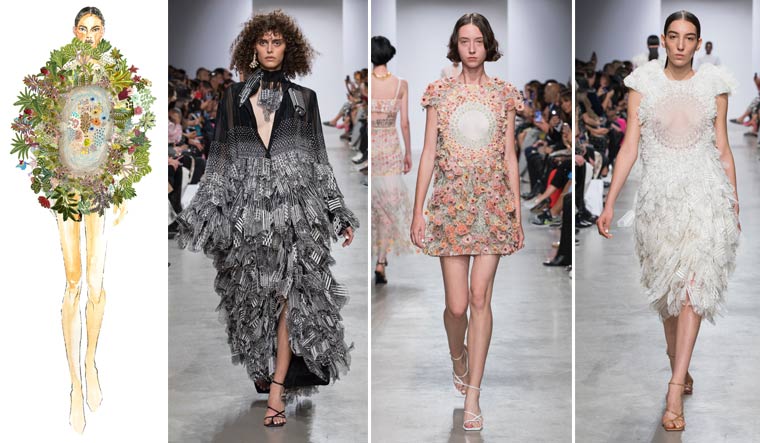 The collection for PHCW is inspired by his recent trip to the Maldives, where he stayed at a “luxury, eco-friendly resort”—Soneva Fushi—“where guests are asked to wander about barefoot and take in the sensations of the beach, the sand, which is luxury in a different sense”. The second inspiration was Madagascar, “the film my four-year-old daughter, Aarna, watches on repeat these days,” he says. “The collection of short dresses, capes and gowns will see a lot of sandy beiges, blues and greens.” Mishra's partner in design is his wife, Divya, an NID alumna.

Through his futuristic designs, he hopes to shine light on the damage the planet has suffered in recent years, be it the wildfires in the Amazon rainforest, Australia or California. His connect with nature has ensured that his brand seamlessly weaves in sustainability with individuality—you will see a lot of floral, leafy and jungle motifs in this collection.

Mishra blames fast fashion brands and machine-made clothing for the industry’s high carbon footprint. Since these clothes are mass-produced, these brands put them on sale and tempt buyers by saying they are trendy. A lot of customers buy and wear them for a few months and then dispose them off, he rues. This not only kills individuality, but also reduces the need for skilled workers.

He hopes that the future of fashion will be cleaner and that recycling will be adopted more into the making of clothes. “Like clothing made from recycled plastic bottles,” says Mishra. “I really wish machine-made fashion is reduced and handmade gains importance.”