Motley, run by Naseeruddin and Ratna Pathak Shah, has youngsters as its backbone 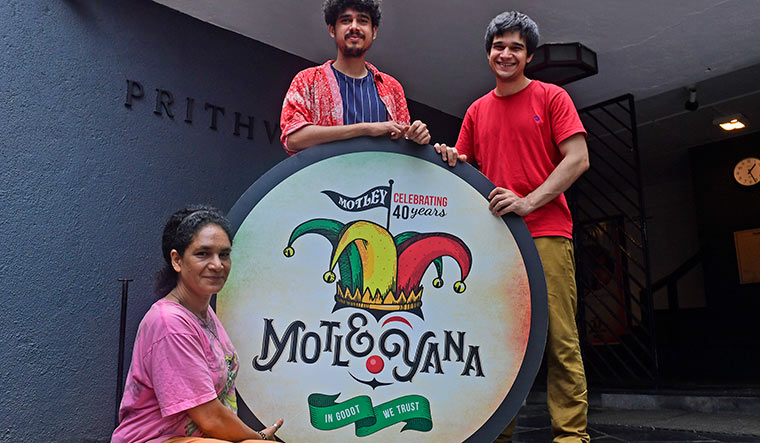 There is an air of excitement at the Prithvi Theatre in Juhu, where Motley, the theatre group run by Naseeruddin Shah and Ratna Pathak Shah, is celebrating its 40th anniversary. The idea of Motley was born in 1978 at a small coffee house in Lucknow, when Naseer and actor Benjamin Gilani decided to produce plays that they were curious about. Their first was Samuel Beckett’s Waiting for Godot. After a year of preparation, the play opened at the newly inaugurated Prithvi Theatre, under the banner of Majma, Om Puri’s company, because they had not yet come up with the name Motley. By its next staging a year and four months later, Motley was formed.

It is not a coincidence then that the 40th year celebrations of the theatre group began at Prithvi. But this time, it was not just the veterans. A group of youngsters, which included the Shahs’ three children, has joined Motley. The venue bustles with energy. Inside the auditorium, small groups are rehearsing from Manto... Ismat Hazir Hain, which is to be staged that evening; Naseer and Ratna discuss last-minute preparations.

Imaad, the elder son, practises a scene in which he falls from an elevated surface. He skids once and is reprimanded by his mother for not wearing appropriate footwear. In another corner, Naseer and daughter Heeba talk about fixing a light.

A while later, the three children (Imaad, Vivaan and Heeba) sit down for a chat. Heeba says that theatre is where she has always felt at home. Naseer’s daughter from his first marriage, she joined the Shahs only at the age of 12. In school, theatre was the one place where she could express herself fully. “That was something I realised I was good at,” she says. “I was good at sports, okay in studies, but really good at this. At least better than the others.” Her brothers add jokingly that she is the most well-versed in theatre among the three of them as she is the only one who has studied it formally (at the National School of Drama). “It always gave me a release,” she says.

Just like their parents, whose conversation is peppered with anecdotes and interesting experiences, the siblings’ talk veers into many topics, from how Waiting for Godot is not taught interestingly in colleges to the current theatre scene in India. They lament over how everything is becoming grand in theatre and how the charm of minimalism is getting lost. The camaraderie among them is apparent. 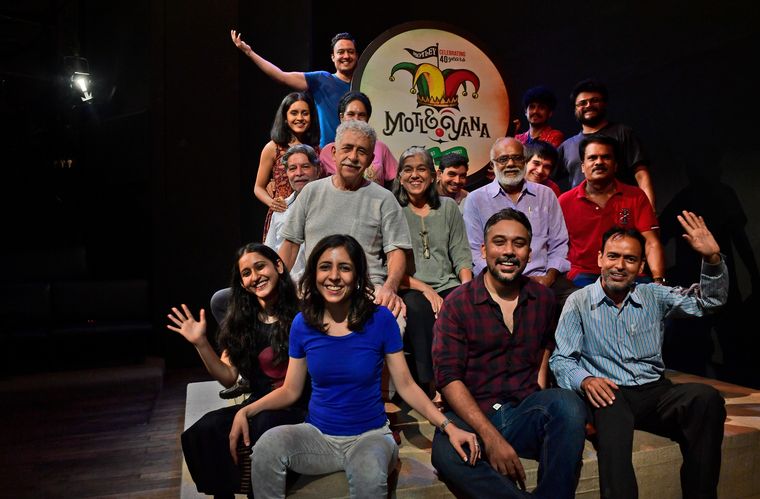 A new act: the team at motley | Amey Mansabdar

Vivaan talks about when Motley ventured into Hindustani plays in 2000 after staging a number of English ones. The theatre group started with Ismat Apa Ke Naam, followed by Manto... Ismat Hazir Hain and Safed Jhooth Kaali Shalwar. “It was like the beginning of the second phase of Motley, and possibly an extremely important phase, too,” he says. Imaad, although happy that they started staging Hindustani plays, is not sure whether they were any good initially. But the other two disagree. “It has been the best experience to work on the Hindustani plays,” says Heeba.

They have not limited themselves to acting. As each has evolved and got a deeper understanding of theatre, they have branched out into directing as well. Vivaan wanted to direct a play in which he could “create effects out of the ordinary for the audience”. So, to the surprise of his parents, he chose to direct Comedy of Horrors that combined three stories—Edgar Allan Poe’s The Man That Was Used Up and The System of Dr Tarr and Professor Fether and Ambrose Bierce’s Moxon’s Master. “The text lends itself beautifully to the stage because it is gothic,” he says.

Imaad—who has found his calling in music and, along with Saba Azad, form the electro-funk duo Madboy/Mink—chose The Threepenny Opera, a play by Bertolt Brecht. First, because music is an intrinsic part of it and second, because he connected with the play’s “bunch of messages” questioning the ideas that most of us are conditioned to believe. 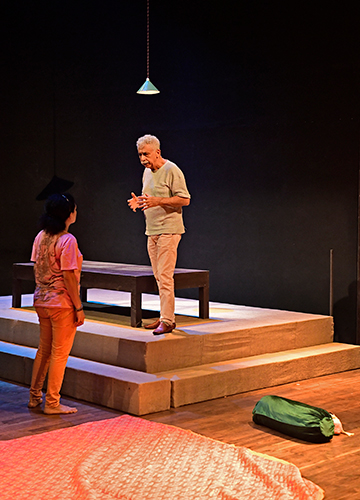 Naseeruddin Shah and Heeba during a rehearsal | Amey Mansabdar

Ratna was amazed when Heeba chose to direct a play based on the Persian book The Conference of the Birds by Farid ud-Din Attar. It is not an easy piece to put together, neither its choreography nor its costumes. “Once, my parents came to see whether everything was going well, and suddenly everything fell into place. They are the angels,” she says.

That is a feeling shared not only by the children but also every young actor associated with the group. Prerna Chawala, who is currently acting in The Father, talks about the patience with which the couple finds out the strengths of each team member. “He would not dismiss you just because you are young,” she says about Naseer.

Sahil Vaid, who considers Motley a home away from home, did acting workshops with Naseer and found them to be a great learning experience. He remembers how Naseer told him to devise a way to interact with the audiences so that they understood each of the psychiatric terms used in the play. Vaid says that the couple’s strength is not just in grooming youngsters as actors but helping them branch out into segments that they are interested in. If Ratna, who takes care of the costumes, moulds their design sensibilities, Naseer is attuned to every small talent they might have.

Naseer and Ratna love their “family in theatre”, but at the same time they want to groom as many youngsters as possible. That is not an easy task though. “It takes a lot,” says Ratna. “It is a question of dealing with each person in a different way because their needs are different, and so are their levels of understanding and responding.” She adds that the enthusiasm of youngsters today helps a lot. They are less inhibited than they were in their time, she says, adding however, that a lot of re-training is required when they take in new people because, overall, the quality of training has been on the decline. “And, that’s not easy,” she says. “What gives us pleasure is helping youngsters discover the right way to go about things. That is how we learnt, too. I worked with Shama Zaidi and learned the art of putting together costumes. Theatre is like a game of kho kho. I learn something and say kho to you and you take it forward from there.”