Anuradha Bhagwati opens up in her memoir about being bisexual 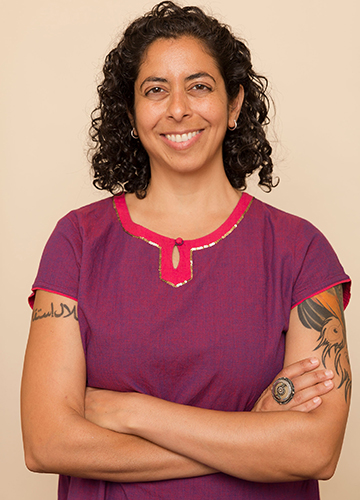 Anuradha Bhagwati was three and strapped to the seat of a Toyota when she realised that she was different. A driver sped up next to the car which her father was driving and started yelling. “I was too young to know much, but I knew that this man felt he was better than Dad. And this meant we were different. I looked away from the man’s face, which was red and white at the same time, because he reminded me of the monsters in my picture books,” she writes in her book, Unbecoming: A Memoir of Disobedience.

Her parents Jagdish Bhagwati and Padma Desai are brilliant economists. Yet, in the America of the 1970s, they were just brown. Bhagwati, born in 1975, grew up in a predominantly white America. Her parents, the kind of academics who could win a Nobel, were trying to assimilate in a country where their intellect did not protect them from racism. In Unbecoming, Bhagwati writes bravely about being the only child of brilliant parents, defying them and joining the Marine Corps. Of being bisexual. Of battling sexism, racism and sexual harassment. And of finally finding the courage to become an activist to “change the landscape of America to make it safer for women and children”.

One of the most powerful accounts of growing up Indian in America, it is compelling, heartbreaking, poignant and brutally honest. At the heart of the book is her relationship with her parents. In her deeply conservative household, when she discovered that she was bisexual, her mother threatened to kill herself if she did not end it then. At her home, grades mattered more than anything. Bhagwati ended up going to Yale, where she was not allowed to choose her subjects. Her parents discussed the CV of the teachers taking the classes before she opted for them. An outsider, Bhagwati tried every trick in the book—including dating a black boy—to try and get back at her parents. Till she found the perfect solution: the Marines.

Bhagwati’s voice in the immigrant Indian experience is essential reading. It is courageous—both in the way she writes about her own failings and shame as well as in the way she writes about her parents. It is about love without hero worship. And for this, she must be given credit. Being harsh on yourself is somewhat easier than shattering your parents’ halo. Her mother was a pioneer in her field. Her father quit his job at MIT to support his wife when she got tenure in Columbia University. “My mother had been through so much,” she says. “She was really shamed when she was in India and was in an abusive marriage that was not her fault. So, she came to the US to start a new life. She had been keeping this traumatic incident from me and [trying to] reinvent herself.”

Her mother opened up about her first marriage to Bhagwati one day “over coffee”. Bhagwati was shocked. She also talks about an incident when her mother went to the room of a colleague, who unzipped himself in front of her. She ran out screaming. When her mother complained to the head, she was told that that was the way things were. “It was a classic Harvey Weinstein story,” says Bhagwati.

Years later, Bhagwati encountered similar systemic sexism in the Marines. It was her mother’s experience that helped her find the courage to support others. “I was in command of 400 troops at one time. It was a lot of responsibility,” she says. “When there was someone who was sexually harassing the women in my unit, it was my moment of reckoning. My mother gave me the courage to stick up for myself and these women.” 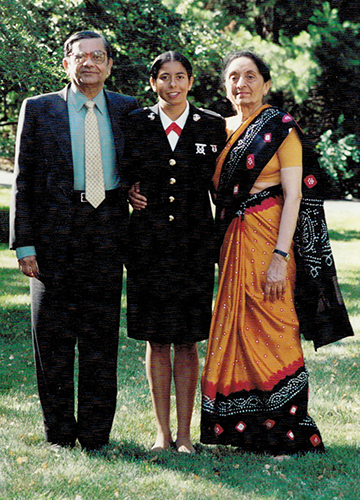 Birds of a feather: Bhagwati with parents in 2001.

The officer was promoted instead and put in charge of the women that he was harassing. All the women in the unit, including Bhagwati, left. “The military is such an overwhelmingly sexist place,” she says. “There is no room to breathe, sometimes, as a woman. I was just surviving from day to day. It is sweeping, and built into every aspect of your training. It was not till a few years later that I started connecting the dots between my mother’s experiences and my own.”

In the military, Bhagwati writes movingly about being brown, a woman and trying to fight for equality. “I served during a time when it was criminal to come out of the closet,” she says. “There was a policy of ‘don’t ask don’t tell’, which forbid you to be gay, bisexual and transgender. I had a little bit of privilege because I was an officer. But I would look at what was happening in the unit. I knew marines who were deeply in the closet. I just did not talk about it with anyone in uniform.”

Now an activist, Bhagwati fights with “rabble rousers” for equality. There is a backlash but there is also hope. There is yoga, vipassana and swimming. There is healing and forgiveness. Her parents have read about her pain and her courage. “My father read the book in one night,” she says. “Cover to cover. I asked him what he thought. He said, ‘I am so proud of you.’ He said it was hard. He cried while reading many portions. Because it hit him hard. The parts where I was suffering. I am guessing it was about not being able to protect your child. I told him that I am okay now. If I was not okay, I would not have been able to write this book.”

She gets emails every day about how her story helped girls and women feel not alone. She helps many more girls find their voice through her work with the Service Women’s Action Network (SWAN). She has also helped the other side to understand. “For me, the most interesting part has been watching my dad evolve over the last three months,” she says. “I think he has a deeper appreciation of what I went through and what my mother went through. I did not expect this. But part of it is that men and boys also read the book. They also have a deeper understanding of what women and girls go through. I think my dad is part of this.” 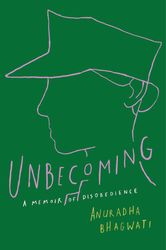 Unbecoming: A Memoir of Disobedience