Two years after cinematic rescue from Pakistan, how has life changed for Uzma Ahmed? 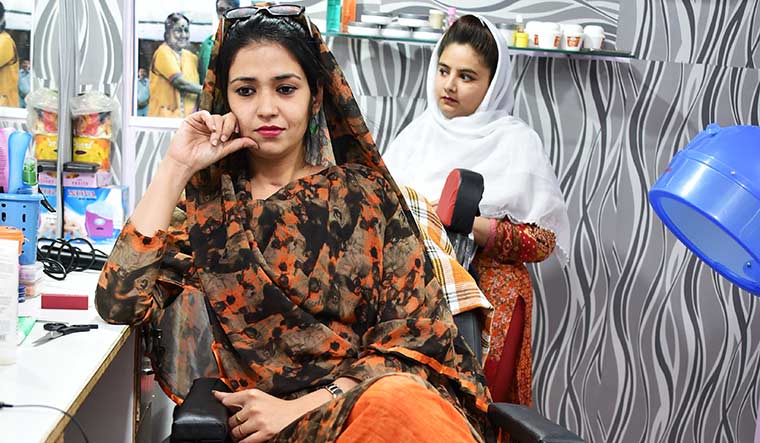 Uzma Ahmed has a special recipe for erasing dark circles. It is her most treasured beauty hack, teased out of coconut oil, vitamin E capsules and sundry other ingredients that she will not disclose. She is at her new salon de beauté—Falak—which opened its doors on April 10 in the narrow, gridlocked lanes of Brahmpuri in north east Delhi. Ahmed has a candescent air about her. Her sharp-staring eyes look luminous and her face is deadpan clean; the abstention of food and water during Roza has not besmirched this aura of cold, hard serenity. “It has been five days and I have not seen a single customer come in. What to do? It’s the holy month of Ramzan,” says Ahmed, while applying a neat shade of pink lipstick to brighten up her face for the photo-shoot. “But why show any signs of stress? I am so busy with my work, I don’t have a second to worry about the future. Even when there are no customers.”

Ahmed, 29, knows about stress of the most debilitating kind. Two years ago, her stress was high-stakes cinematic. She hit the headlines in May 2017 after being rescued by the Indian High Commission in Pakistan. A resident of Delhi, Ahmed fell in love with a Pakistani, Tahir Ali, in Malaysia, where she had gone to do a course in business management. Ahmed then had a child from her failed first marriage, who lived with her grandmother in Delhi. Later, she went across the border to meet Ali, who lived in Buner, one of the remotest parts of northern Pakistan in Khyber Pakhtunkhwa, on the Afghanistan border. It was there, Ahmed says, that she learnt that Ali was married and a father of four. She was allegedly abducted, drugged, abused and forced to marry Ali at gunpoint. She was kept confined in a tiny house with her travel documents confiscated. One day, she managed to trick Ali into taking her to the Indian High Commission on the pretext of meeting her brother. What followed was a chain of back-channel manoeuvres at the highest diplomatic levels in India and Pakistan to enable Ahmed to cross the Wagah safely.

After an Islamabad High Court ordered her release, Ahmed returned to India on May 25 to roaring applause across television channels in India. External affairs minister Sushma Swaraj tweeted her welcome, greeted and hugged her through a blur of flashing cameras, and christened her “daughter of India”. A broken, tearful, bespectacled Ahmed could not stop thanking Swaraj. She described Pakistan as a “well of death”. 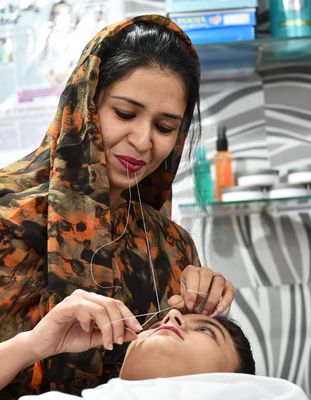 With a customer at her beauty parlour | Aayush Goel

When asked exactly how she managed to reach the Indian High Commission, Ahmed says she is not allowed to talk about it. “They are making a movie on my story titled Uzma: The Daughter of India,” she says. “The entire chain of events in Pakistan will be there.” The biopic is set to release in 2020, although who will play Uzma has not yet been finalised. But the film project has offered her a new lease of life, of which she is now the sole director. Ahmed says she received 015 lakh as signing amount and permission rights for her biopic by its producer, Rakesh Dang. With it, she bought a one-room house near Seelampur and a Wagon R, which she liked to drive alone; it calmed her. But while the Wagon R was stolen a month after it was bought, the house became the refuge she needed to recover. She shut herself from the outside world in that first year after coming back from Pakistan. Slowly but steadily, she started rebuilding her life. She has been promised five per cent of the profits when the movie releases. “It can be anything,” she says, with a half-expectant smile. “Five rupees, 500, five lakh, five crore... who knows?” She hopes to buy a two-room house with it.

As she reels off these numbers, Falak, her seven-year-old daughter, who is prancing around the parlour stacked with VLCC, Lakme and Taaj products on rickety shelves, immediately pipes up in excitement, “Five rupees”. Ahmed gently admonishes her for putting on too much make-up. “I was even approached [to star in] Big Boss 11,” she says. “I thought I could go. It might offer good money. But my producer said I should wait. Because the reality show might reveal everything about my life before the film releases. At least, after the film, I can command a higher price.” 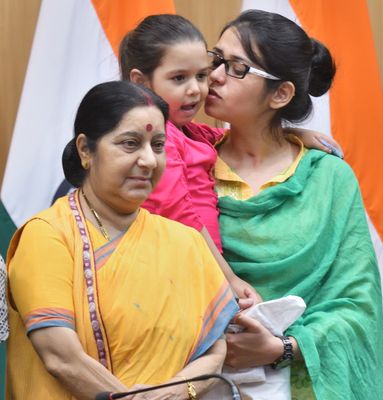 Home sweet home: Ahmed with external affairs minister Sushma Swaraj and her daughter Falak upon her return to India in May 2017 | Sanjay Ahlawat

Ahmed says her immediate family cut off ties with her since her Pakistan episode. Her grandmother does not speak to her. She does not have any siblings and her parents live in the Netherlands. The last time she saw them was 15 years ago. Now, she only has her daughter, who has thalassaemia. “Between the parlour, looking after my daughter, the home and the kitchen, I don’t have any time,” she says. “I tire myself out so completely with work that, once I enter my house, I can only eat, listen to some old songs and go to sleep.”

She wants to create more space in her parlour for hair spa and facial, and build a changing room in the corner. Once a month, she goes to Mumbai for story briefings and consultations with potential directors.

She rubbishes reports that she has hired victims of abuse to work as assistants in her parlour, and plans to set up an NGO. “I only think about the success of my parlour,” she says. “And setting up a bigger branch of it in Dehradun.” The moment she mentions the state, her face lights up. “I spent the best years of my life at school there,” she says. “All my friends from Dehradun have become something or the other—IPS officer, teacher.... I really want to figure out a way to go back to Dehradun. I would like to settle there. I don’t have anyone in Delhi.”

But by the word “settle”, she does not imply marriage. That word is like a dark circle she has managed to wipe off from her scheme of things. Ahmed says that her first husband, who fathered Falak when she was 22, was so abusive that the arranged marriage was doomed to fail. In Malaysia, she says her loneliness made her invite Tahir Ali into her life. Even though Ali’s name triggers painful memories, Ahmed wants to clarify that she was not really in love with him. “I did not have a father, mother, or sibling,” she says. “Hence, I was always searching for someone. I was lonely and depressed. And then I met Tahir through a friend. He was a taxi driver there, and he would ferry me around town for work or job interviews. That is how we got to know each other. But it was not love.” Now, she asserts, she has learnt her lesson. “Do not believe anyone,” Ahmed adds triumphantly as a parting remark. “Especially men. They are all dogs.”