The Lives of Freda review: Vivid portrayal of a remarkable life

May you live in interesting times is an old Chinese curse. Freda Bedi did just that. She turned the curse into a blessing. The mother of actor Kabir Bedi, Freda lived through extraordinary times. Though English, Mahatma Gandhi asked her to be a satyagrahi. She befriended Sheikh Abdullah, advised Jawaharlal Nehru on Tibetan refugees and spent her last few years as a Buddhist nun. Andrew Whitehead's The Lives of Freda, is a vivid portrayal her remarkable life and choices.

Freda married B.P.L. Bedi in an Oxford register office in 1933, defying her family. Interracial marriages were rare then. And, their engagement was front page news in the Oxford Mail. Undaunted by the challenge ahead, Freda embraced married life with great gusto. She established a warm relationship with her mother-in-law, Bhapooji, through letters. She learned to drape a sari much before coming to India.

It was this embracing of another identity that made her exceptional. Freda never chose to be an English “memsahib” in India. Instead, she learned Punjabi and Hindi, and became an Indian. Along with her husband, she wrote constantly about India. She actively participated in the nationalist movement. In 1939, she was arrested and was sent for six months rigorous imprisonment in Lahore Women's Jail.

The book gives insights about Freda's complex marriage relationship, too. Bedi was not faithful to her. Whitehead quotes Guli, her daughter, saying: “My father never flaunted women in front of my mother.” Guli, however, remembers an encounter when Bedi brought an Italian woman to meet her in school. But, for the most part, Freda turned a blind eye believing that marriage was more than the “sex” part.

Freda's engagements with Tibetan refugees changed her life. She advised Nehru that Tibetans should be allowed to study in their own language. Soon, she became a Buddhist nun. She did not consult her family before taking that decision. That did not go down well, writes Whitehead. Kabir Bedi felt “betrayed” by her decision. Guli was furious. Yet, finally, Freda managed to balance the two contrasting worlds—that of being a mother and a grandmother, and being a nun.

She was a woman who had chosen to tread a path that was different and, certainly, tough. Her story deserved to be told and read. 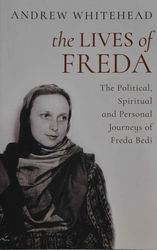 THE LIVES OF FREDA