A show that features 38 artists—all autistic 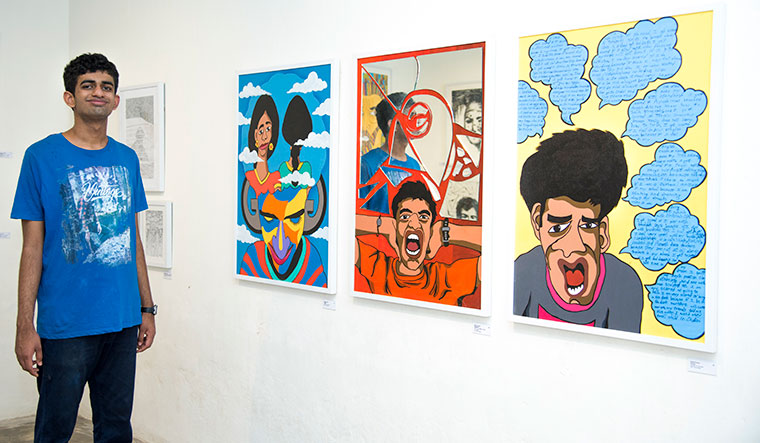 Rohit Anand had a surreal dream on December 15, 2018 (Yes, he has a gift of remembering dates). He saw Mansi, the girl who had come to his school seven years earlier (December 1, 2011, according to him) on clouds. Her hair was plaited, lips painted and her earrings bloomed as yellow flowers.

When he told his teacher Akshayee Shetty about the dream, she encouraged him to paint it. I Want—a work on acrylic—is now part of the 'Outsider Art' show at Dravidiya Art Gallery in Fort Kochi. Supported by the Kochi Biennale Foundation, the show features 64 works by 38 artists—all belonging to the autistic spectrum.

“Though Rohit is 18, his mind functions like that of a 10-year-old with those concepts of love and romance,” says Shetty, who is the founder of Sense Kaleidoscopes academy for the autism-Aspergers community in Bengaluru. “If you ask him why he liked Mansi, he would probably say that they were playing snake and ladders or maybe a quiz game.”

He did not say that when I asked him. Instead, talked about another painting, Shattered, in the show. As Shetty said, there is no way you can force an autistic person to do anything. They are self-motivated. “This art work [Shattered] is about November 2, 2015—my best friend Ayush Bambani's birthday—when I broke a mirror,” says Rohit in a loud tone, giving stress to each word. “I broke it because my best friend Ayush Bambani was crying.” 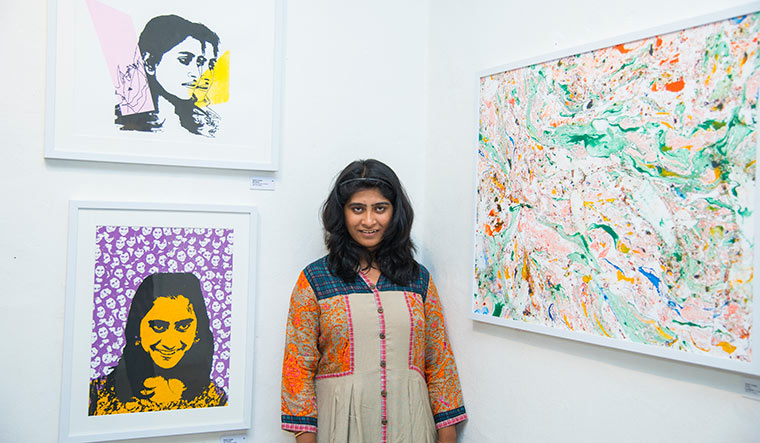 Sakshi Chalke with her works My Selves and I am Sakshi | Vipin Das P.

Bambani, 18, is another student of Shetty whose three paintings are featured in the show. Bara Bhaskaran, THE WEEK's illustrator and a former Kochi-Muziris Biennale artist, observes that Bambani's works are marked with distinctive artistic patterns. “This is a disorder that actually works with organised patterns,” says Shetty. “Bambani is a low-functioning boy, but he is a selling artist for the past two and a half years.”

The idea of this show is to bring forward the works of these talented artists outside the mainstream, says Ajai Vadakkath, who, along with his wife Preethi, initiated the show. The couple, parents of an autistic boy, is active in various forums on autism. Last July, Ajai shared a few paintings of autistic artists with Bose Krishnamachari, founder of Kochi Muziris Biennale. Impressed, Bose asked him to send more such works.

Soon, the idea of a show sprouted and an open call was made for entries. “We got nearly 270 entries from across India, and Bose made the selection for the exhibition,” says Preethi. “His selection was purely based on merit. He did not want to look at their level of autism or disability or age for that matter.” Whether it is for Adarsh Shetty's pencil on Fabriano paper work Frida Kahlo, or Bambani's Rotring pen and ink work A Dog's World, or Sakshi Chalke's self portrait screen-print, I am Sakshi, the Outsider Art show matches with any other compelling art exhibition.

The motifs of different works at the show mirrors the non-linear thinking, obsessive-compulsive nature and other attributes of the autism spectrum. Shashwath Ghosh's painting Liquid Voices and his plaster of paris work White Music both portray Karaoke microphones because he is obsessed about singing at his school. When asked whether he would sing for me, Ghosh, 17, readily agreed but demanded a mic. Then he belted out 'Aashiyaana', facing the mic in his walled painting.

Sachin Joshi, 19, is an explorer of video footage, from the age of six. In his video work, The Airport, featured at the show, he explores the patterns of his foot movement and those of others.

The reason to engage in art may be different for each of them. But one thing is sure—art serves as the best medium to catch their dreams.