Art on a platter For about eight days in Panaji in December, a children's park became the site of a simulated tinto—a village marketplace where people once gathered to gozzale (gossip) and get their daily fix of vegetables, fish, haircuts, bread, letters and news. Going beyond fish curry and prawn balchão, this tinto also had wheat ladoos from the cookhouses of Goud Saraswat Brahmins; manganey or a Goan version of kheer or sweetened rice porridge flecked with fenugreek; aambadey or hog plum chutney served with a local variation of dosa, a poor man's meal from a Goan Hindu kitchen.

“You see, during Lent, we even had veg pulao,” whispers Odette Mascarenhas, a food historian, critic, author, television host and long-standing curator of Food as ‘Art’ at the annual Serendipity Arts festival in Goa, the first major art event in India to start a dedicated 'culinary arts' segment.

Few brave-hearts would risk disdainful stares by suggesting vegetarian delicacies to eat while on a vacation in Goa. But an arts festival in the city brooks no such attitudes or biases. The three-year-old Serendipity Arts Festival has consistently curated food experiences as the most accessible art form, including its collaboration in 2016 with an artists-led think-tank—Centre for Genomic Gastronomy—which got people to sign up for gustatory samplings of smog and tears. This year, Mascarenhas directed masterclasses on home remedies like how to use Goa's go-to tipple Feni as medicine with generous doses of egg yolk, milk, coffee and cinnamon in a theatre performance and employ sugarcane as canvas for artworks, inspired by a folktale of elephants rampaging sugarcane fields.

“Food stimulates all our senses unlike other art forms,” says Mascarenhas, who has rejuvenated forgotten Goan community dishes and food stories through pop-ups, paintings and plays. While Serendipity and Mascarenhas have become frontrunners of art exhibition-style food menus, they have also emphasised the need to document fast-disappearing community dishes and how they were cooked, understanding food history and sociology or how food reinstates caste practices.

Key art festivals today are ensuring food is not just about catering, laughs and libations. They are exhibits in themselves, preening their origins in complex social fabrics and letting visitors sample lesser-known hyper-local flavours and ingredients in the most cerebral ways. The ongoing Kochi-Muziris Biennale is a case in point. The 2018 edition is the first one since the festival started that has food art as a formal exhibit. Vipin Dhanurdharan, a 29-year-old artist from Kochi, took inspiration from the teachings of poet, rationalist and social reformer Sahodaran Ayyappan—who is known for his revolutionary inter-caste community dining concept called Misrabhojanam—when he set up his open kitchen installation at Aspinwall House in Fort Kochi, where anyone can cook, eat or serve a feast. Six months ago, he started visiting the houses of locals in Fort Kochi to share meals. “I would sometimes randomly walk in, tell them about my work, eat whatever they were cooking or offer to share. I ate dosa, biryani, curry and vegetables, anything.... And then I would draw their portraits,” says Dhanurdharan, who is exhibiting the portraits near the open kitchen.

In the remaining run of the festival slated to end in March, he is soon going to host his own version of Mishrabhojanan by inviting those very people in the portraits. 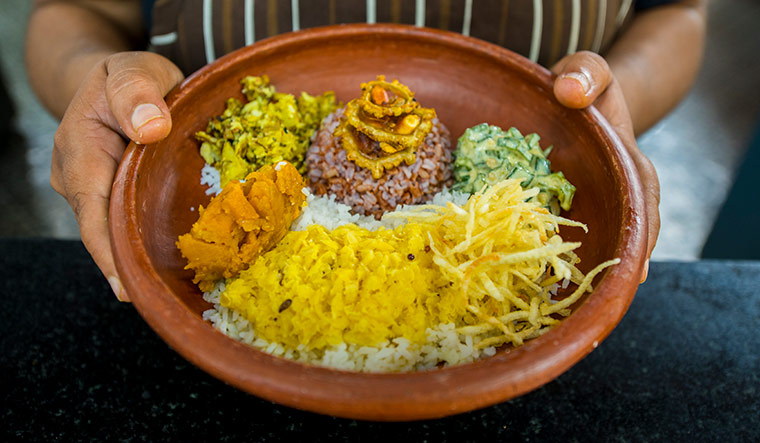 Rice and shine: A dish of hetumari and tulaipanji rice served at the edible Archives Exhibition in Kochi | Vipin Das P.

Apart from Dhanurdharan, home chef and food consultant Prima Kurien has collaborated with Anumitra Ghosh Dastidar, former sous-chef at Ritu Dalmia’s Diva, to present a special project called Edible Archives on food, memory, migration and identity through a showcase of heritage rice varieties which transform into sensory exhibits. This is done for the sake of preserving "traditional knowledges, historical deprivations, systemic erasures and indigenous biodiversity". Shalini Krishnan, a writer documenting the project, tells THE WEEK about the pinkish Rajamudi rice from Karnataka, a nutritive rice variety patronised by the Wodeyar kings. In fact, because the farmers grew the rice only for the ruling family, they did not have to pay taxes. This rice is served at the KMB with yam and raw banana salan, tamarind-jaggery-pumpkin, mustard garlic chutney, crisp-fried bitter gourd and mullet cooked in mustard sauce. “Our food culture is getting impoverished. Especially rice-eating tends to be very monoculture,” says Krishnan.

“The memories of what you have eaten are there in some kind of archival form,” says Dastidar. “When you eat something, it might remind you of something you have eaten 10 years ago because it is catalogued in your mind. Through this project, we wanted to make a 'collective edible archive' of different indigenous varieties of rice which are not commercially available. We have already used 24 varieties of rice. Each day we have a 'rice of the day'. When people read about the rice, it makes an entry in their minds.” 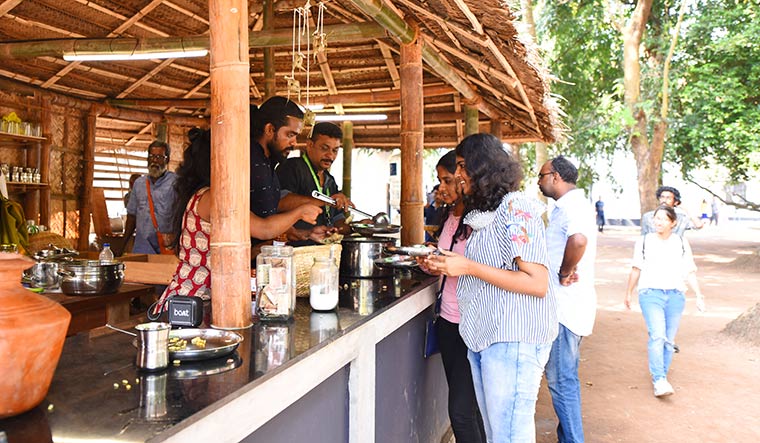 While these food-centric art projects are more visible by being part of big-ticket art festivals, other smaller ones make for equally fascinating case studies. Legend has it that in Ramalingapura village in the Tumakur district of Karnataka, a king would regularly take his flock of sheep to the forest. One day, the mother sheep returned late and refused to feed her own baby. The king later followed the mother sheep into the forest to find that she was tending an abandoned infant girl. The king, touched by the sight, adopted the child with the mother sheep as her godmother. Sheep milk was then banned in his kingdom forever. Many communities in the village still do not allow the drinking of sheep milk.

Arpitha R.G., a 29-year-old visual artist from Bengaluru, mined these food-based sagas, anecdotes and experiences and got school students to paint the stories. These were later exhibited in solo shows through a grant facilitated by the India Foundation for the Arts in 2015-16.

Delhi-based artists Sreejata Roy and Mrityunjay Chatterjee devised a year-long project last year called the Khirki Living Lab—a series of pop-up kitchens run by refugees residing in south Delhi's Khirki village and Hauzrani, both of which are a cradle of migrants and asylum seekers. Think bolani, chicken Kabuli pulao or chapli kabab with roti, burani byanjan from Afghanistan; burkh and sambusa from Somalia, dolma from Iraq; and minced meatballs and steamed plantain from Congo. The entire project, which invites locals to share meals and understand their cultural value, was turned into an exhibition in December called Museum of Food: A Living Heritage, in collaboration with Kiran Nadar Museum and supported by the Prince Claus Fund and the British Council.

Perhaps it is art that will continue to salvage priceless food traditions in the years to come.