Faith gets a facelift

After restoration, the Blue Synagogue is back to its former glory 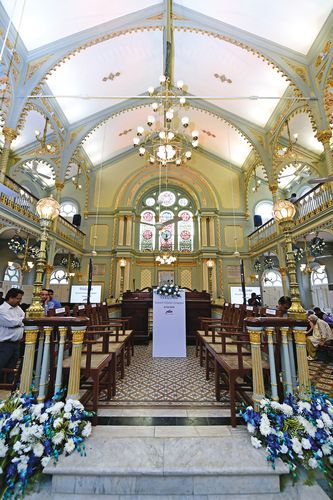 On February 7, Keneseth Eliyahoo Synagogue, the second oldest Sephardic synagogue in Mumbai, was unusually crowded. After almost two years of restoration work, the Blue Synagogue—as the previously moss-coated structure in shades of white and faded turquoise was popularly known—re-opened to much fanfare. The restored neo-classical structure has remained true to the original design, retaining the Gothic-Victorian architectural elements and the original colour palette in shades of deep indigo and white for the outer facade and a Victorian-style green and gold for the interiors. Its Milton flooring, Corinthian columns, semi-circular and segmented fenestrations, and beautiful stained-glass panels featuring Indian flora and fauna motifs give it a certain exquisiteness.

“It is a classical revival building which has now retained most of its 19th century grandeur,” says Abha Narain Lambah, principal conservation architect of the project. “We, of course, undertook roof repairs first so that the building was structurally secure. And, thereafter, we made sure everything was retained in form and taste, including the original religious symbols which had faded, such as grapevines, citron fruit and the Star of David.”

“A large majority of Jews living in India migrated [to other places] long ago,” says Jinx Akerkar, who has been visiting the synagogue almost every weekend for the last 60 years. “Many of us have returned to see the transformation of this synagogue which had formed an integral part of our lives while we were here.”

Her friend, Tamar Marge Guppay, recalls how, 30 years ago, the place would be buzzing with life but soon fell silent when many families decided to shift base. Her daughter got married at the Blue Synagogue two years ago.

Dressed in a fluorescent green blazer and black dress, Sara Manasseh, 72, whose grandfather Jacob Sassoon, grandson of businessman-philanthropist David Sassoon, built the Keneseth Eliyahoo Synagogue, recalls the past with a glimmer in her eyes. “My parents were born in Bombay and married at the synagogue and I was born here as well,” she says. “I remember coming here every Sabbath... and it would be full, the women upstairs and the men down. We would celebrate all festivals together, dress up, sing, and dance. It was a beautiful way to grow up.”

She is accompanied by her brother, Solomon Sopher, leader of the Baghdadi Jewish community in Mumbai and chairman and managing trustee of the Sir Jacob Sassoon and Allied Trust, which played a significant role in restoring the synagogue. The restoration of stained glass, costing Rs20 lakh, was funded by the World Monuments Fund. The Kala Ghoda Association contributed Rs45 lakh, which was utilised for structural and roof repairs. Over Rs5 crore was donated by the JSW Foundation. 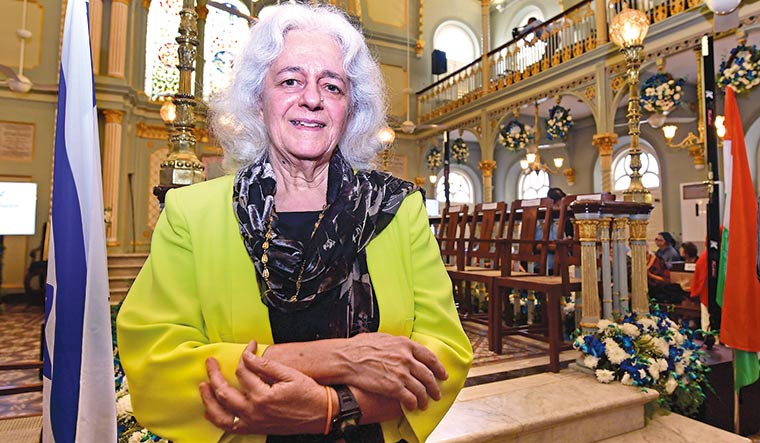 Along with the cosmetic changes, the synagogue's revamp has also brought in a systemic reform—it will now, for the first time, allow people from other faiths, too, to take part in the prayers. Secularism also played a big part in the synagogue's restoration, says Sangita Jindal, chairperson, JSW Foundation. “When I took up the restoration, people asked me if I was a Jew,” she says. “I am not. But my intention went beyond religious affiliations. It was about restoring a structure with historical importance.”

Ever since it was first constructed in 1884, the synagogue assumed historical and religious significance for the strong Bene Israeli and Baghdadi Jewish minority community of Mumbai, many of whom would visit it for worship and instruction. An entire Jewish ecosystem once flourished in Kala Ghoda in south Mumbai, with the Keneseth Eliyahoo Synagogue at its centre. This included the Jewish Club, the Sassoon family’s offices and residence, and the 150-year-old landmark David Sassoon library, which still exists.