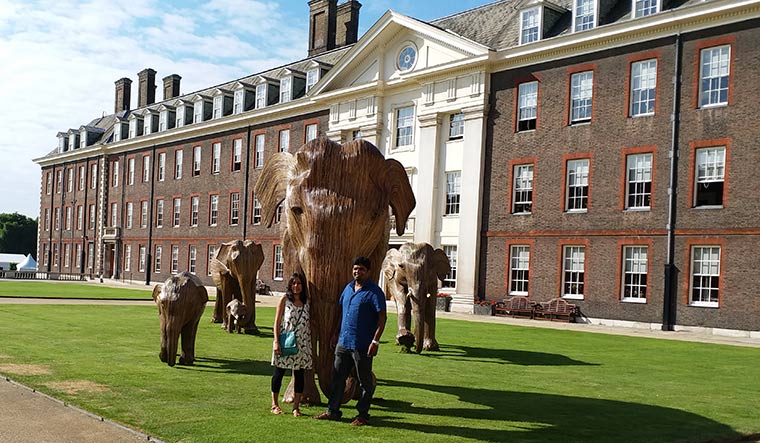 A mammoth undertaking: Shubhra Nayar and Tarsh Thekaekara with a few of the lantana elephants | The Real Elephant Collective

Hundreds of years ago, when wild animals in different parts of the world started competing with us for land and resources, we did to them what we were getting really good at—we killed them off. India was an exception. Despite how thickly populated the country is, it is home to more than half of the world’s tigers and two-thirds of its Asian elephants. But this heritage of protecting wildlife is under threat because we are restricting conservation efforts to protected areas, but animals do not just live in these areas.

“We create these islands of forests and destroy the rest of the earth,” says Tarsh Thekaekara, who runs an NGO, The Shola Trust, in Gudalur, south India. His wife, Shubhra Nayar, and he conceptualised the project in collaboration with a London-based NGO called Elephant Family. “Elephants live well beyond protected areas; 80 per cent live alongside people. They urge us to rethink our model of development. That is the overarching idea behind taking these [lantana] elephants all over the world.”

The elephants are designed by The Real Elephant Collective, a social enterprise set up by Nayar. They are being made by 70 tribals in Gudalur and the MM Hills of Karnataka, with the help of a research institution called the Ashoka Trust for Research in Ecology and the Environment (ATREE) that has expertise in working with lantana.

A month-long exhibition of 30 lantana elephants started in Fort Kochi on February 7. There is a certain fluidity to their forms, like in those childhood games when somebody cried ‘statue’ while you were mid-movement. If it were not for the perfect symmetry of the stripes on their wooden bodies, one might expect them to shake off their lethargy and amble off. Their perfection makes them, in a way, imperfect.

“Each elephant is based on one of the wild elephants from this landscape,” says Nayar, who is also a performance designer for life-size puppetry. The herd will preview under the title, CoExist, across Kochi, Bengaluru and Delhi this year. Elephant Family, the only charity in the UK dedicated to protecting Asian elephants, will launch the main exhibition of the entire herd in the royal parks of London in 2020, after which it will travel to iconic locations across the US on flatbed trucks. The elephants will be eventually auctioned and the proceeds will go into a fund to help the conservation of Asian elephants and improve their relationship with people.

“On the global stage, Asian elephants still live in the shadow of their larger African cousins,” says Ruth Ganesh, principal trustee and creative force at Elephant Family. “For Elephant Family, raising awareness of their plight to new audiences and raising funds to support their conservation across their range states is crucial. These stunning elephants are about to embark on a migration like no other.”

Other than creating the fund, the project is unique in many ways, says Nayar. It helps in removing a harmful weed from the ecosystem, provides livelihood to tribals and conveys to the world individual stories of different elephants and their personalities. Each lantana elephant, based on a real one, has a story to tell, she says. They are all vividly described. KK2, or Radha Kapikaad, for example, is a middle-aged female whose left ear has a two-inch fold. She had a baby in April 2016 (Kutty KK) and is seen mostly around the Kapikadu region of Karnataka.

The first Indian pre-commission of a matriarch and her baby was made by philanthropist Rohini Nilekani. The pictures of the elephants “blew me away”, says Nilekani. She feels the project “creates a beautiful and impactful way to increase awareness of the fragility of our ecosystem and allows us to reconnect with the natural world in a unique way, through these life-size sculptures”.

“The mother and calf arrived at our Coonoor property in December,” she says. “They are certainly eye-catching and add beauty and grace to the lawn. The fact that they are modelled after real animals makes them even more special. They will remain there and will definitely begin many conversations.”