Let there be life! 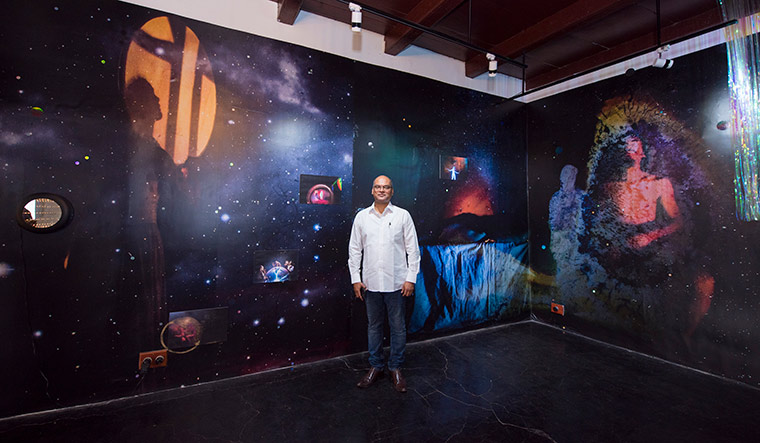 On one of the walls of Jew Town in Mattancherry is painted a green boat that bobs on a yellow sea, its sails swollen with an invisible wind. The sea, of course, is never yellow, but the wall art is not meant to reflect reality but rather, the mood of the sojourners—a group of Jews who are singing and searching as they near the Malabar coast. Part of the calligraphic text next to the boat reads, “All sit together, rejoicing and singing. Ela, elo, ela, elo, ela, elo.” Over the years, the yellow sea has turned murky. The exuberant shine of the early settlers has dimmed to a weak glow. There are no Malabari Jews remaining in Jew Town, and only five Paradesi Jews, the rest having migrated en masse to Israel post the 1950s. Jewish artist Meydad Eliyahu and calligrapher Thoufeek Zakriya, through this work and many others on the walls of Mattancherry, wanted to preserve the culture of Malabari Jews and bring to light their rich heritage.

The project is called Red Crown, Green Parrot by the Kashi Art Gallery and is a collateral of the Kochi-Muziris Biennale. It was born when Eliyahu decided to convert into art the box of documents and pictures that he had inherited from his ancestors who used to live in Jew Town. The art is also inspired by Jewish women’s folk songs, poetry and discussions with Malabari Jews settled in Israel. While the Malabari Jews are said to have arrived in Kerala as early as the 1st century AD, after the destruction of the second Jewish temple in Israel, the Paradesi Jews arrived in the 15th and 16th centuries from Spain and Portugal. The name of the project is borrowed from the motifs of the crown and the parrot that frequently appeared in Jewish folk songs, marriage contracts and synagogue embellishment.

“We wanted to bring the project outside the gallery onto the public space, so that people could have an emotional connect with the work,” says Tanya Abraham, curator of Red Crown, Green Parrot. “The culture of the Malabari Jews was unique—an amalgamation of Malayali and Jewish traditions that you do not find anywhere else in the world. A lot of it has been wiped away, thus removing the evidence of a grand past.”

Take a walk down Synagogue Lane in Jew Town and you will see the last remaining vestiges of Jewishness. Handicraft shops named Shalom and El Shaddai, which are now, ironically, owned by Kashmiris. A few Jewish buildings like Sassoon House and A.B. Salem House. And a Jewish shop owned by the oldest Jew there, 95-year-old Sarah Cohen. Framed on the walls of the shop, in between rows of embroidered handkerchiefs, Jewish caps called kippahs, runners and children’s dresses, are photographs of a young, smiling Sarah with her family. Sarah herself is now very frail. When I visit her, she is sitting by the window, half-swathed in shadows. Her speech is muddled, and all I can make out is that she never wants to go back to Israel. This is home now. As I prepare to leave, she takes my hand and keeps repeating something about her daughter and sister. I cannot help but wonder whether the Jews here lead a lonely existence. 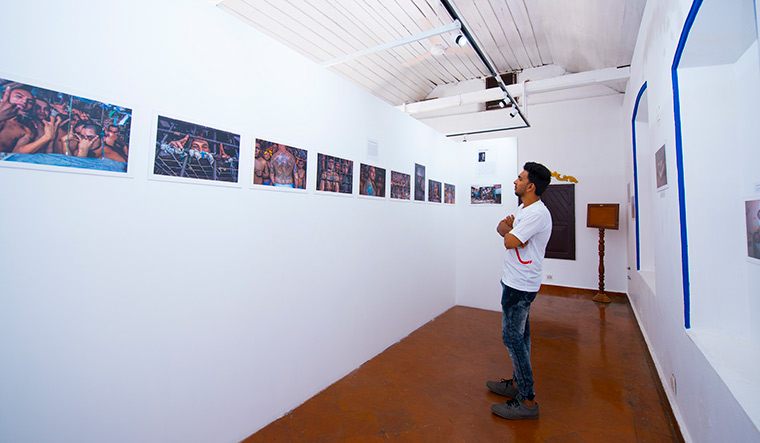 “It never used to be like this,” says Junaid Sulaiman, owner of the Mocha Art Café in Jew Town, who has lived here all his life. The café used to be the house of a Jewish rabbi before Sulaiman’s grandfather bought it from him. “There was a vibrant community of Jews here during my childhood. They used to live on the top floor, while their servants lived downstairs. In the evenings, they would all come out and play card games like rummy. They brought electricity, the first supermarket and boat service to Jew Town. They were very friendly and spoke fluent Malayalam. Nowadays, however, they don’t mingle.”

When you enter the gallery of the café, you see on the walls some stark photography by Indian and international photographers like Nick Ut, Mark Edward Harris, Boris Eldagsen, Giles Clarke, Vineet Vohra and Tanvir Taolad. A girl with a haunted face in a refugee camp in Iraq, a malnutritioned boy in Yemen with a pouch full of a rural potion attached to his arm to ward off snakes, street gangs imprisoned in iron cages in El Salvador…. The photographs are part of an exhibition called Pause, another collateral project of the biennale. 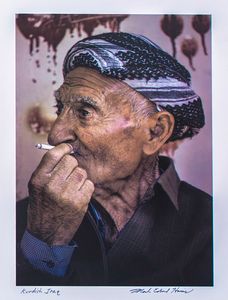 Photograph of an Iraqi man by Mark Edward Harris, part of Pause.

Pause is a segment of a larger festival called the Water Town Festival—an art, cultural, music and culinary extravaganza that will be on till March to celebrate the 450th year of the Paradesi Synagogue in Jew Town. One of the objectives of the festival is to revive the quaint town through celebrity walks, food carts, street magic, graffiti and performances by musicians like Anoushka Shankar, Shreya Ghoshal and bands like Sitarsonic, Mind Map and Motorcycle Diaries. International artistes like musician-painter Alex Grey will also perform.

“When we came to Jew Town and talked to the people here, we realised that the place is in a sad state of decline,” says K.G. Sreenivas, the curator of Pause and one of the organisers of the festival. “There is hardly any business here, and by 7:30pm it is a dead town. Everything is shut. We wanted to try to change this. There was such a lively and vibrant population here earlier.”

A few attempts are being made to modernise the town while retaining its heritage. Like how Jewish homes like the A.B. Salem House and Mandalay Hall are being given a facelift. Salem was the Malayali Jews’ ambassador when the Israeli government delayed their immigration to Israel during the 1950s. He was eventually able to arrange their return. His home has now been converted into a bed and breakfast accommodation by Jose Dominic, former CEO of the CGH Earth Group. Similarly, Mandalay Hall, another Jewish home, is being converted into a concept hotel.

It remains to be seen whether Jew Town can be brought back to its past glory. Today, however, those glorious days exist only in the memories of the Jews who used to live here. As one of them, Dr David Hallegua, said when he returned to celebrate the 450th year of the Paradesi Synagogue, "I remember the time spent with my grandparents at Koder House, waking up in the morning, hearing the ship siren and the seagulls cawing softly in the distance. Those are my favourite memories, very dear to my heart…. Jew Town is where my soul is going to be when I die."