COP27: How developed world has taken the lead for climate change

India is assuming the presidency of the G20 in 2023 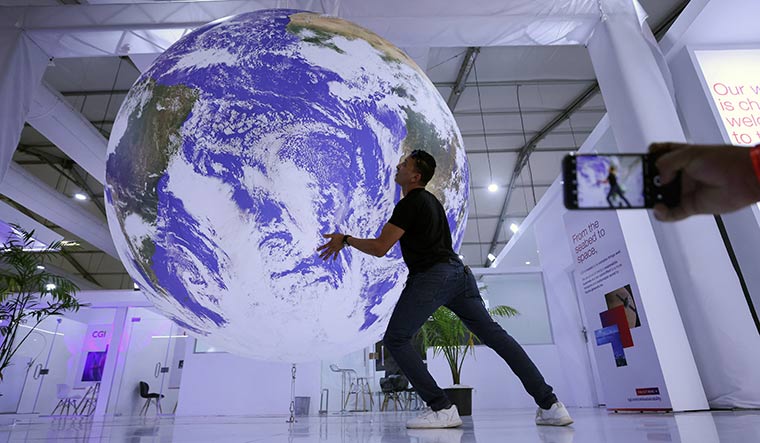 Save the planet: A person poses for a picture near a replica of the earth during the COP27 summit in Egypt | Reuters

The meeting, which was held from November 6 to 20, in Egypt, understood the need and agreed to a special fund to cover loss and damages. The developed world, for the first time, quietly took ownership of being the main polluter and responsible for global warming and climate change. On the principle that the “polluter pays,” developed countries will mainly be contributing to the fund. Available funds were previously used for adaptation to climate change (preventive measures). Now it will be available also for those who suffered loss and damage due to climate change.

The world leaders committed to setting up a financial support structure for the most vulnerable countries by the next COP in 2023. The UN Secretary-General António Guterres welcomed the decision, which brought to close one of the most vexatious issues of climate change that has been stalling expeditious progress in this area for several decades. He expressed that the decision gives the required “political signal” to rebuild “broken trust” between the developing and developed world. However, COP27 shied away from using tough language on limiting global warming to 1.5 degrees Celsius.

India failed in getting a commitment from COP27 to phase out all fossil fuels though its commitment to phase down coal power remained. What irked climate advocates still was that by including “low emissions” energy resources alongside renewables of the future, a loophole has been left to bring all kinds of new fossil fuels in direct contravention of the guidelines of the UN Intergovernmental Panel on Climate Change (IPCC) and the International Energy Agency (IEA).

Narendra Modi’s mantra, the LiFE movement―Lifestyle For Environment―got a boost when it was included in the cover decision of COP 27. India welcomed the inclusion of the transition to sustainable lifestyles and sustainable patterns of consumption and production, affirming its belief that, “We are trustees of this planet Earth.” India also appreciated that COP27 focused on climate change and agriculture by establishing a four-year work programme on climate action in agriculture and food security, given the dependence of millions of farmers on agriculture for subsistence.

The farming sector is important because not only does it suffer some negative impacts of climate change, but it is also a source of emissions like carbon dioxide, methane, and nitrous oxide. High quantities of methane is exhaled by ruminant livestock into the atmosphere. The methane is produced by enteric fermentation that takes place in their digestive systems. Globally, around 32 per cent of methane emissions comes from livestock, due to enteric fermentation and their urine and manure being other sources of methane and nitrous oxide.

A statement by Union Minister for Environment, Forest and Climate Change Bhupender Yadav pointed out that Modi had pledged to net zero emissions in India by 2070 at COP 26, Glasgow. Within one year, India had submitted its long-term low emissions growth strategy indicating low carbon transition pathways in key economic sectors. He emphasised that India has been at the forefront as far as climate-related actions are concerned.

India has initiated new initiatives in renewable energy, e-mobility, ethanol-blended fuels, and green hydrogen as an alternate energy source. It has encouraged international coalitions like the International Solar Alliance and Coalition of Disaster Resilience Infrastructure at a global level. The significance of India’s efforts in climate change can be appreciated knowing that India’s contribution to the world’s cumulative emissions, so far, is less than 4 per cent and our annual per capita emissions are about one-third of the global average.

India is assuming the presidency of the G20 in 2023 with the motto of ‘one earth, one family, one future’. As far as global climate change is concerned, we are all in one boat. Yadav stressed this in his statement at the international meet, “Our journey towards a planet safe for humanity is one that no nation can undertake alone. This is a collective journey to be undertaken with equity and climate justice as our guiding principles. We hope that the fight against climate change will unite the world as one family.”

―The writer is an author and a former journalist.