If world goes into recession, India too will be hit

The slowing economic growth is a real worry 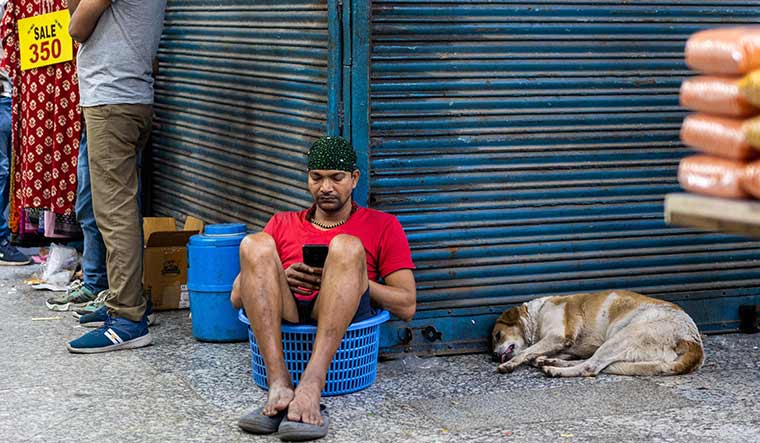 In a spot: Consistent shocks to the unorganised sector have affected creation of jobs in the informal economy | AFP

Jageshwar Sharma vacated his rented single-room tenement in Noida and took a bus to his village in Uttar Pradesh a month ago, after “waiting for weeks to get a new job”. The young man had gotten used to the cycle of getting low-paying jobs and being retrenched abruptly ever since the Covid-19 pandemic hit. His new plan is to try for a job closer to home. He has heard that there are many openings at the new Lulu Mall in the city. He is yet to get one, though. “It all gets rather exasperating at times,”he said.

The life of Sijo John, another Noida resident, however, may seem a world apart. Executive assistant to the CEO of an entertainment and media giant, John, 34, did not have a pay cut during Covid like many of his friends, and his wife, Merin, who has a quasi-government job, even got a hike after the last Pay Commission. But he calls his financial status precarious. “The price rise has been so massive that my budgets have gone off tangent despite the double income,”said John. “It is not difficult to live by, but we are unable to save any money—for investments or for future expenses like kids’ education and medical.”

These laments about jobs and inflation are not the usual litany we hear from time to time. There is something unusual happening around us—a looming global recession, no less, and it may have already bared its fangs upon India.

Caught in a landslide

The world’s biggest economy, the US, is technically in recession (negative growth for two continuous quarters) with factories dialling back production and job cuts increasing. In a desperate bid to prevent a ‘long recession’ expected by the end of this year, the UK a month ago went in for the sharpest interest rate hike in a quarter of a century, while Germany is seeing the biggest drop in consumer spending since 1980. The UN, in a report on October 3 warned that “monetary and fiscal policy moves in advanced economies risk pushing the world towards global recession and prolonged stagnation” and that it could inflict “worse damage than the financial crisis in 2008 and the Covid-19 shock in 2020.”

The energy crisis in Europe could have a domino effect this winter, making a recession inevitable. The World Bank, in fact, warned as much, saying that all of the policy tweaking by governments may not stop a recession from hitting the global economy soon. “If the world goes into recession, don’t think that India can sit pretty,”said Subhash Chandra Garg, former finance secretary. “It is not good news for us at all.”

From becoming the fastest-growing major economy in the world last year, things could go awry for India if a global recession hits. Already the price rise of everything from petrol to edible oils has been among the sharpest in a decade. Retail inflation percentage remains above 7, and has been above 6, the upper limit of tolerance set by the Reserve Bank, for nearly a year now. The wholesale price index has been hovering around a crazy 14 per cent since last December.

“Don’t forget that the estimated GDP growth of 7 per cent this year is coming on top of the last three years’ average growth rate of 1.7 per cent—that means we have been only growing at 4 per cent in four years. What growth can we achieve then?”asked Garg. “Inflation is a GDP deflator. India should not be too sanguine about this.”

And that is just the tip of the iceberg. Industrial growth fell to 12 per cent in June, from nearly 20 per cent the previous month. It was one of the reasons that forced Finance Minister Nirmala Sitharaman to ask Indian industry what was holding it back from investing. The value of the rupee against the dollar has fallen from 074 at the start of the Ukraine war to nearly 082 in the first week of October, while the overall profit of listed Indian companies (excluding financial firms) was down 17 per cent in the April-June quarter this year. Figures released last week show that output growth in core sectors is at its lowest in nearly a year.

Exports, which hit an all-time high of $422 billion in the last financial year, are now slowing down due to “many economies entering recession while some advanced ones (are) already in one,” according to A. Sakthivel, president of the Federation of Indian Exporters’ Organisations.

And we might not have seen the last of the price hikes. “These have been challenging times for the industry. The falling value of the rupee against the dollar is adding continued pressure on input cost by at least 1.5 per cent,” said Satish N.S., president of the consumer appliance company Haier India. “(This) may result in slight price adjustment in the coming months.”

How did it all come about? In a way, it is a confluence of two perfect storms. First was the governments trying to avoid a crash from Covid lockdowns through financial stimuli. In many countries, it resulted in direct transfer to people’s accounts, which led to spending and consumption going up. The idea was that this support would be slowly withdrawn (tapering) once the economy recovered.

But Vladimir Putin put paid to that best-laid plan.

For example, while crude oil prices were inching upwards post-Covid, the war caused it to sky-rocket, from $96 to $123 in just ten days. “It led to an oil crisis not seen by the advanced economies since 1973, pushing the global economy into a shock,” said Sinha. “It started manifesting in cost and availability of many goods and services, too.”

What the Russian invasion did was to aggravate an already delicate post-Covid recovery—economies needed stimuli, but with the abrupt rise in prices, authorities had no option but to quickly ‘taper’it by raising interest rates.

The problem? It made business investment and activity costlier. And also triggered a collapse in demand, with households cutting back on spending.

“If spending doesn’t grow, the government’s revenue (through taxes) also comes down and GDP falls,” said Sinha. “The severity of the situation is such that (many) economies are staring at a recession.”

While many experts believe that India is unlikely to fall into a recession, there is no doubt that it will be affected. The question is, how much?

“At a time when the recession is already knocking on the doors of the west, I believe India is well poised and should be able to navigate the next several quarters with limited growth, but certainly, with no recession,”said Suyash Gupta, director general of Indian Auto LPG Coalition.

That is cold comfort, though. “Any event that results in volatility of the import items of India (oil, raw material for factories) or the export markets of India (iron, steel, jewellery), then we will be affected,” said Deepak Jasani, retail research head of HDFC Securities.

In other words, India’s dependence on imported oil and gas does not augur well in a global recessive scenario. “We are ‘takers’,” Sinha explained. “If oil price shoots up, you may be able to do a little bit of adjustment, but you cannot say ‘I will not buy a gas cylinder anymore’.”

The flow of investment into India could be another big casualty if the west slows down. “A sombre global investment sentiment can have an impact on the Indian markets. Startups are expected to feel the pain, as the case has been over the past few months,”said Sanket Sinha, executive director of Lighthouse Canton, a Singapore-based global investment institution.

The number of new unicorns, startups with a valuation of more than $1 billion, has sharply come down in the recent months, with foreign investors tightening their purse strings anticipating a recession. Softbank, which counts the likes of Paytm, Flipkart, Ola and Swiggy in its portfolio, has already warned of a ‘funding winter’.

Any way the wind blows

The ray of light amid all the doom and gloom is the fervent optimism that India may just be better equipped to withstand the global tailwinds than most other countries. The government has been shouting from the rooftops the increase in direct tax and GST, and that there is no need to worry.

But, that may have more to do with post-pandemic recovery and more efficient tax collection methods than a robust economy, and it is no bulwark against future turbulence. Many rating agencies have already downgraded India’s GDP growth, along with that of the US, the Eurozone and China.

The Modi government’s best-case scenario will be keeping fuel prices and job losses under check and hoping that the increase in the repo rate (the rate of borrowing by banks set by the RBI, which impacts loan interest rates) have a magic wand effect. Interest rates have already been hiked above pre-Covid levels. The rest will be up to the industry to expand capacity and domestic demand.

The new economy could also help. The growth in startup solutions, digital technology, renewable energy and environmental solutions could provide a buffer. “Wealth creation is going to happen in the new ecosystem of the new-age companies in the coming decade,”said Shashank Randev, co-founder of the venture capital firm 100X.VC. “International funds have not disappeared from India. They have just become cautious.”

The consensus is that while global recession will impact India, there is unlikely to be a recession in India. The worry would be slowing growth. “I don’t see India achieving more than 7 per cent for two years, and thereafter may slide, unless it takes up critical reform measures and we get investment flowing in infra, digital economy and environmental economy,” said Garg. “Or we could slip to 5 per cent or less, which would be bad for a country like India.”