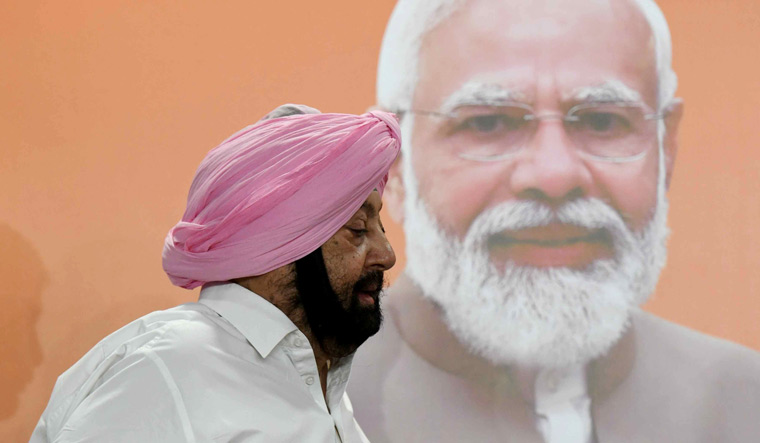 The road to the 2024 Lok Sabha elections is paved with possibilities. The Congress is trying to reinvent itself by organising the Bharat Jodo Yatra and preparing to elect a new president—perhaps the first non-Gandhi in nearly 25 years. The BJP, ever on expansion mode, continues to bring in leaders from diverse political parties, even from those that are not ideologically compatible.

Since Rahul Gandhi began his walkathon, two former Congress chief ministers have joined the BJP. In Goa, Digambar Kamat switched sides with seven other MLAs; in Punjab, Amarinder Singh and four of his family joined the BJP, merging with the saffron party his 11-month-old Punjab Lok Congress, which he had floated after quitting the Congress. With these attention-grabbing inductions, the BJP has been able to steal the mind space.

The hardcore BJP worker may view the induction of non-hindutva leaders into the party fold with apprehension. But then, the BJP itself has been widening its reach since Prime Minister Narendra Modi and Union Minister Amit Shah took the leadership reins. Since 2014, as many as 10 former Congress chief ministers have joined the BJP. Apart from Amarinder in Punjab and Kamat in Goa, there has been Giridhar Gamang in Odisha, S.M. Krishna in Karnataka, Vijay Bahuguna in Uttarakhand, Ravi Naik in Goa, K.L. Chishi in Nagaland, N.D. Tewari in Uttarakhand, Narayan Rane in Maharashtra and Pema Khandu in Arunachal Pradesh. Another former chief minister who has quit the Congress and may soon ally with the BJP is Ghulam Nabi Azad.

Gamang’s induction has been especially interesting. When he was named Odisha chief minister in 1999, Gamang was a member of the Lok Sabha. And though he was preparing to become a member of the state assembly, he voted against the A.B. Vajpayee government in a trust motion in Parliament. The government fell by one vote, leading to mid-term polls. By inducting him, the BJP seems to have now forgiven Gamang.

Amarinder has become the third prominent royal in two years to join the BJP, after Jyotiraditya Scindia and R.P.N. Singh. Pedigree is not the only thing that binds the three together; they are also alumni of the prestigious Doon School, and like other royals and Doscos, had found their political calling in the Congress. But with the fall in the grand old party’s political fortunes, and the loss of their pocket boroughs in elections, they have chosen the winning side. “My relationship with the Congress is almost zero,” said Jammu and Kashmir royal Karan Singh recently. His son Ajatshatru Singh had joined the BJP in 2014.

Some of these royals share family ties. Amarinder Singh’s grandson Nirvaan Singh, who is now in the BJP, is married to Mriganka, daughter of Karan Singh’s son Vikramaditya Singh. Mriganka’s mother, Chitrangada, is Jyotiraditya Scindia’s sister. Nirvaan’s mother, Jai Inder Kaur, is also in the BJP. Her second son, Angad Singh, is married to Aprajita, daughter of former Himachal chief minister Virbhadra Singh. Virbhadra’s wife, Pratibha Singh, is now president of the Congress’s Himachal Pradesh unit. Amarinder’s son, Raninder, who is president of the National Rifle Association of India, joined the party with his father.

Kamat has attributed his decision to jump ship to divine intervention, but most Congress defectors cite the BJP’s focus on nationalism and Modi’s leadership as reasons for their decision. Amarinder was left with “no choice” after he suffered the humiliation of being removed unceremoniously as chief minister. With his entry, the BJP has gained its biggest Sikh leader since its inception. But, though he is suave and bold, Amarinder’s political heft has been on the wane in recent years. In his last stint as chief minister, he was accused of closeting himself in his farmhouse and running the administration through his coterie. 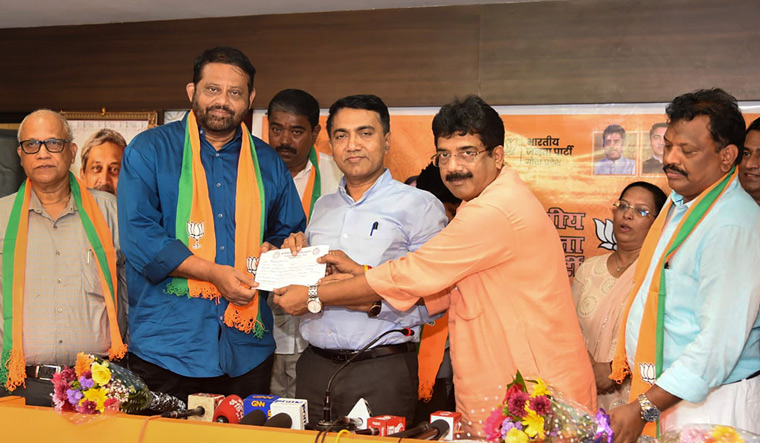 The BJP was marginalised in Punjab after the farmers’ agitation resulted in the breaking of ties with its oldest ally, the Shiromani Akali Dal. The party has been focusing on inducting Sikh faces to overcome the gap. Most of the Sikh leaders who joined BJP in the past few months are close to Amarinder. Whether Amarinder, who is now 80, would be able to campaign in 2024 remains to be seen, but the BJP now has a leader who can present its side in the Sikh-dominated state.

Amarinder’s wife, Preneet Kaur, remains a Congress MP from Patiala. “It is not necessary that a wife may do as her husband does,” said Amarinder. Only one of his two children may get BJP ticket to contest elections. Said Union Agriculture Minister Narendra Tomar: “Amarinder Singh’s thinking has always matched with the BJP. For him, too, it was nation first.”

The BJP has been undergoing a change since it won the 2019 Lok Sabha polls. It has been aggressively bringing in fresh talent. Several of the old faces have lost berths in the cabinet and in the BJP’s top decision-making bodies such as the parliamentary board and the national executive. When BJP president J.P. Nadda reconstituted the national executive by including first-timers like Scindia, Brajesh Pathak, Dinesh Trivedi, Kushboo Sundar and Vijayashanti, it became clear that the party was looking to expand its base in areas where it was either weak or yet to find its feet. The reconstituted national executive has younger leaders, new faces and broad representation of different castes and communities.

“The secret of Modi’s success in ground-breaking methodological innovation is remarkable flexibility,” writes author Ajay Singh in his recent, acclaimed book The Architect of the new BJP: How Narendra Modi Transformed the Party. “The underlying pragmatism of the RSS encourages and welcomes creative and radical departures from the playbook. Ever since his induction in the party, Modi has deployed unorthodox techniques, caring little for the old-fashioned dogmatic ways of expanding the organisation.”

The rewards for joining the BJP have been varied. Some leaders have received quick Rajya Sabha nominations owing to their stature within their communities, while others have had to go through cooling-off periods before getting ministerial berths. Himanta Biswa Sarma, who quit the Congress to join the BJP in 2015, became Assam chief minister. In Maharashtra, Shiv Sena rebel Eknath Shinde, too, was rewarded with the top post.

The BJP’s message is clear. “It is the winning party,” said a senior leader, “and it can the change of fortunes of those joining its fold.”