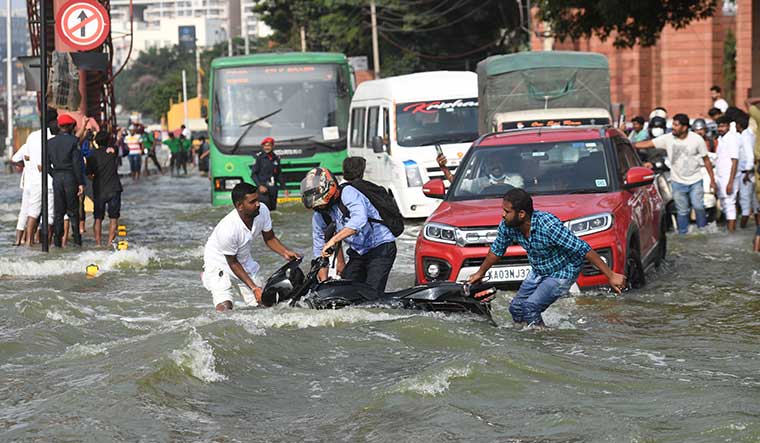 One night of relentless rain, and even the richest tech bosses were stranded in knee-deep waters in their plush homes, looking for coracles to reach safety. According to the India Meteorological Department, Bengaluru received 370mm of rainfall this August (131.66mm on August 30), falling just short of the all-time record of 387mm in August 1998.

This day was expected. Over the years, rampant corruption in the civic body had led to massive encroachment on lakes, lake beds, rajakaluves (storm-water drains) and the buffer zone, concocting a recipe for disaster.

As the skies emptied, the floodgates opened on social media. Photos of a rain-lashed Bengaluru spread worldwide, calling into question its status as the country’s IT capital.

Now, as the water clears, the city has to work overtime to safeguard its image globally. “For the first time in Bengaluru’s history, people have fled their homes on boats,” said former chief minister and senior Congress leader Siddaramaiah. “The flooding of the IT corridor has affected Brand Bengaluru.”

The blame game continued. While state Congress president D.K. Shivakumar asked what stopped the ruling BJP from clearing the encroachments, former chief minister and Janata Dal (Secular) leader H.D. Kumaraswamy dared Chief Minister Basavaraj Bommai to release a white paper on the encroachments and the names of those guilty.

Bommai, upset with the negative headlines, asserted that only a part of the city was flooded and blamed the previous Congress government. “These were unprecedented rains,” he said. “Only two zones (of the eight) have faced flooding. The Mahadevapura zone has 69 tanks, all of which have breached. We are installing sluice gates for these tanks. The previous Congress government... gave permission for construction even in the lake bed, tank bunds and buffer zone. I have... given Rs1,500 crore to develop storm water drains and Rs300 crore to remove encroachments.”

Bengaluru has an 859km-long storm-water drain network connecting the four major valleys—Vrishabavathi, Challaghatta, Koramangala and Hebbal. But only around 440km is free from encroachment and diversion. The valleys are highly polluted today because solid waste and untreated sewage are dumped there. Climate change is another factor—the infrastructure is not designed to handle so much rain in a short span, say experts. 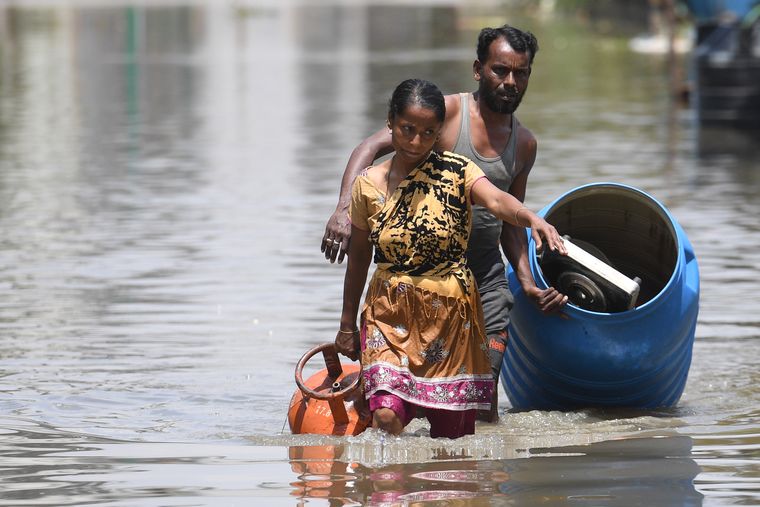 The politician-bureaucrat-builder mafia is being widely blamed for dynamiting Bengaluru’s civic infrastructure. “Every contractor has a godfather who is a politician,” said BJP leader and former corporator N.R. Ramesh. “The contracts are awarded to a coterie of contractors and the bills are settled even before the completion of the work. For instance, a Rs840 crore package for storm-water drains was awarded to contractors in 2016 and the full payment was released in 2017. Only 60 per cent of the work is complete. The contractor falsely claims to have de-silted the drains and dumped it in in two quarries.”

Said Srikanth Narasimhan, general secretary of the Bengaluru NavaNirmana Party: “Our analysis shows that the BBMP (Bruhat Bengaluru Mahanagara Palike) has spent about Rs3,200 crore on storm-water drains in the past five years, but they are neither connected to the lakes nor carry water from water-rich lakes to water-deficient ones.”

Taking aim at Bommai, AAP state convener Prithvi Reddy said: “The Captain Raja Rao committee report on road construction and management of primary, secondary and tertiary drains has been gathering dust since 2006, despite the High Court’s direction to implement the recommendations. The chief minister continues to hold the Bengaluru development portfolio and we demand it be given to someone who can devote time to [it]. A separate commission should be set up to tackle the encroachments.”

As the politicians bickered, the corporates flagged their concerns about Bengaluru’s infrastructure. That the pandemic-induced work-from-home model was in place was the only saving grace that rainy day. In a letter to Bommai, the Outer Ring Road Companies Association (ORRCA) indicated that IT companies might “seek an alternate destination” if the situation did not improve. “Our member IT firms have suffered a loss of Rs225 crore on August 30,” read the letter. “We generate revenue of $22 billion per annum (32 per cent of Bengaluru’s revenue) and are the highest tax contributors. The lack of focus on the development of infrastructure in this corridor is appalling.” 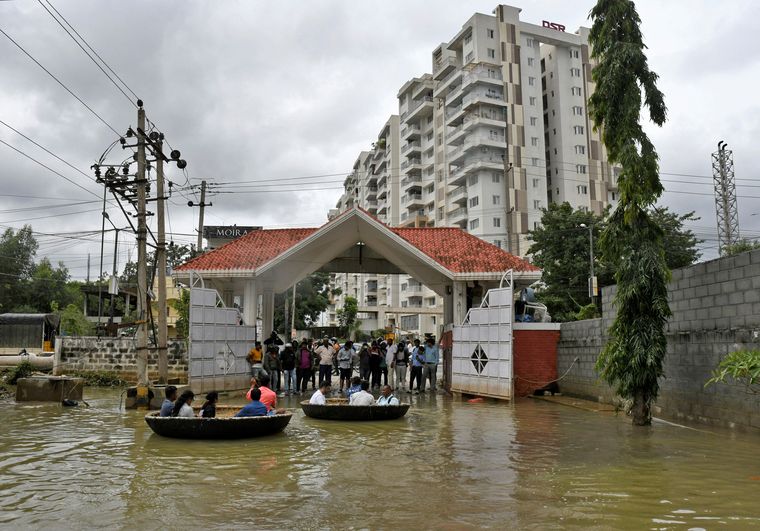 Staying afloat: people stuck in a bengaluru neighbourhood use coracles to move to drier ground | Reuters

Former Infosys director T.V. Mohandas Pai launched a social media campaign with ‘#SaveBengaluru’ and talked of Bengaluru’s crumbling infrastructure and lack of governance. The campaign irked the BJP. Ramesh accused Pai of “tarnishing” the city’s image. “The IT companies have themselves to blame for the mess,” he claimed. “At least 79 companies affiliated to ORRCA, 250 firms of Electronic City Industries Association and 100 companies in ITPL, Mahadevapura, are guilty of encroaching on the storm-water drains and the buffer zone. The total built-up area of tech parks is around 9.85 lakh square feet, and 25 per cent of the buildings [here] are on encroached lakes or drains. Such rampant encroachments were allowed by corrupt officers and some dishonest elected representatives.”

Ramesh also reminded the corporates that the Karnataka government had always supported the IT industry. “Between 1999 and 2004, the Bengaluru civic body allowed laying of OFC (optical fibre cable) ducts for 4,500km without charging any road-cutting fee for the benefit of the IT-BT companies and tech and business parks,” he said. “The government also bore the road restoration cost of Rs3,000 crore.”

Mahadevapura MLA Aravind Limbavali, however, defended the IT companies, saying that they had only rented or leased the buildings. The builders, he said, were responsible for the encroachments. “Most residential and office complexes have either diverted the storm-water drains or encroached on them, thus reducing their width,” said the BJP leader. “We want builders to put in place a system to drain out rainwater from their premises. The drains can then be connected to the common duct, which the government will build.”

To limit the damage, Karnataka IT Minister Dr C.N. Ashwathnarayan urged the chiefs of IT companies to help build Brand Bengaluru and assured them of monthly virtual meetings to discuss the progress of the development projects.

Infosys cofounder Kris Gopalakrishnan, who heads the state government’s IT Vision Group, appealed to the companies to not lose heart. “I feel Brand Bengaluru will remain intact,” he said. “Any city would come to a standstill in the face of such a heavy downpour. While 80 per cent of the city had no problems, Mahadevapura faced an unexpected situation.”

State Industries Minister Murugesh Nirani was sunnier in his assessment. He said that no harm was done to Brand Bengaluru and that investors were making a beeline for the city. “In fact, we are now incentivising investors who choose to invest outside Bengaluru, as part of our Beyond Bengaluru policy,” he said. “We are promoting the ‘walk to work’ concept by encouraging self-sustaining townships on the outskirts to reduce pressure on the city.”

Many industry experts THE WEEK spoke to felt that Bengaluru’s brand image was too strong to be affected by rain. “Flooding can happen due to heavy rains and, in the peak of summer, there could be water shortage,” said Dr H.S. Srivatsa, professor, Faculty of Management and Commerce, M. S. Ramaiah University of Applied Sciences, Bengaluru. “IT hubs in other states also face similar conditions. That does not mean Bengaluru will lose its focus as a startup and IT city. Even cities like California face many a blip like this.”

Sanjay Motwani, president of the Bangalore Commercial Association, said: “On a long-term basis, the government has to take this alarm seriously and work towards building infrastructure that can handle extra growth. Investments will be affected in the near future if the government does not do the needful.”

He added that only certain areas such as Whitefield and Bellandur were flooded, and the central business district and even south Bengaluru, to an extent, were unaffected. “The outskirts, where exponential growth has been [achieved] flouting all rules in the past two decades, are the areas that are affected,” he said. “Low-lying areas and lake beds were encroached upon to build apartments and sewage treatment plants.”

Girish Linganna, director, ADD Engineering Components Limited, pointed out that no one had left the city when the Bellandur lake was burning. “We cannot rebuild an ideal Bengaluru, but we can make a sincere effort to improve infrastructure and mass transit,” he said. “Union Transport Minister Nitin Gadkari has suggested many solutions to the Bommai government. We have to see how many would be implemented. Unfortunately, the government is seeing the problem only from an industry point of view. Who is talking about the urban poor? Those on the margins are further marginalised.”

Linganna felt that though there was no immediate threat to Brand Bengaluru, “investors will look for options, startups or otherwise”. However, he added that Bengaluru got investment not only because of weather or infrastructure, but also for reasons such as quality manpower, cosmopolitan outlook, top educational institutes, science and technology research wings, and the English-speaking culture. “Each area of Bengaluru is like a city,” said Linganna. “There is hardly any alternative to Bangalore. Even the Japanese, French or Germans can live here without communication issues. Bengaluru, hence, will continue to get investments.”