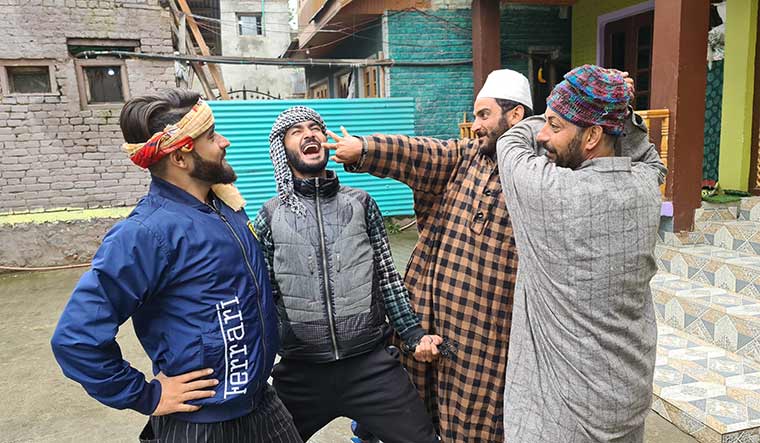 MAKING COMEDY in conflict-ridden Kashmir is no laughing matter.

But a bunch of YouTubers from the Valley—all in their 20s—are doing just that, earning both fame and a living. With little access to movie theatres and other sources of entertainment, people in Kashmir are turning to YouTube channels to find some relief, comic and otherwise. What make these channels popular are their comic content, simple language and good acting, taking one back to the 1980s and 1990s when Kashmiri serials on Doordarshan and actors like the late Shadi Lal Koul and Nazir Josh were quite popular.

But these videos are not just for laughs; they have a message at their core. For instance, in Berozgar Ti Azuk Jawan (Unemployment and Today’s Youth) by Kashmiri Rounders, a man meets the father of a girl whom his son, an unemployed doctor, wants to marry. The girl’s father refuses to let his daughter marry an unemployed man, but agrees to marry her off to the man’s elder son, who is disabled but a well-paid engineer. The channel, with more than 9.5 lakh subscribers, is among the most popular Kashmiri YouTube channels.

Likewise, ‘Before and after elections’ by Kashmiri Kalkharabs, which has more than 8.5 lakh subscribers, tells the story of an MLA making tall promises before elections. After getting elected, he mistreats his supporters, including a village elder who requests him for an irrigation pump for farmers. He tells him they should plant maize instead of rice, which needs less water. The video aims to highlight the hypocrisy of politicians and how they deceive people for power.

Kashmiri Comedy Kings’s Matlabi Dost (Selfish Friend) is the story of a boy who ignores his father’s warnings about his friends. Later, he finds out that a friend had misbehaved with his sister when she was alone at home. The video got more than four lakh views.

“I was studying outside Kashmir when I saw people making videos and uploading them on social media,” said Mir Amir, founder of Kashmir Rounders. “After I returned home, I first opened a Facebook page and then started the YouTube channel in 2016 as I was unemployed.” A resident of Shangus village in south Kashmir’s Anantnag district, Amir said his two cousins, Mir Owais and Azhar Shah, later joined him. “Our videos became very popular, and our subscription base swelled,” he said. “Now, earning from our channel is our main source of income.” His parents and wife have been supportive of his initiative. “I married three years ago and have a daughter,” he said. “My wife appreciates that I have a huge fan following, including many women.” He said they were pleased to know that people enjoyed watching their videos. “There is a lot of disturbance in south Kashmir, and we try to provide some entertainment to people,” he said.

While the feedback has been largely positive, there has been criticism, too. “People said, ‘look at what they are doing after completing studies,” said Amir. “But that did not deter us as we are happy to make people laugh.” He and his cousins are now focusing on improving the quality of their channel and plan to get better recording and editing equipment.

While the content creation is not limited to comedy—there are popular gamers from Kashmir, too, like Bin Zaid (the gaming channel has 14.8 lakh subscribers)—the larger audience in Kashmir, especially in villages, is hooked to comic videos on different YouTube channels.

“Grief has been our constant companion in Kashmir,” said Parvez Bhat of Kashmiri Kalkharabs. “People needed some respite.” Kashmiri Kalkharabs was started by five friends from Panzinara on the outskirts of Srinagar—Bhat, Showkat Ahmed, Jan Muhammad, Sabzar Ahmed and Muhammad Aslam—in 2018. Bhat said that initially their families thought that they were wasting their time but later came on board. The channel received a YouTube Silver Play Button for having more than a lakh subscribers. “We are aiming for a golden button [10 lakh subscriber mark],” said Bhat. “Recently, we got a letter of appreciation from a group of doctors who said our comic videos made their patients feel better.” 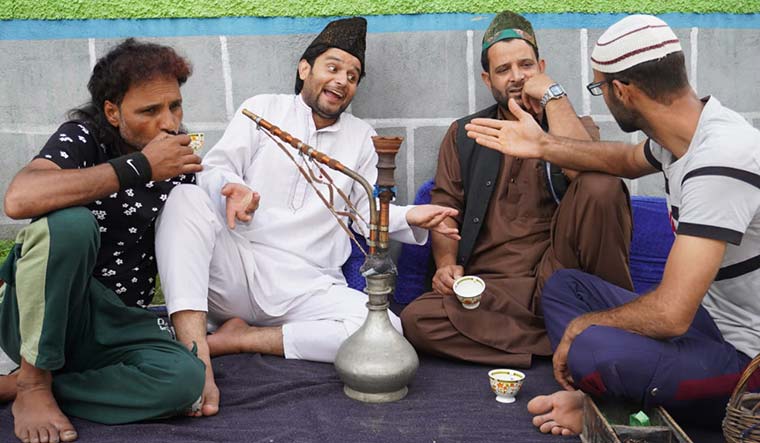 In action: A video by Kashmiri Comedy Kings.

Kashmiri Kalkharabs are now planning to create content in Hindi. “The competition in Kashmiri is increasing,” said Bhat. “It is necessary to make videos in other languages to fend off competition.”

Thanks to these YouTube channels, many a talent has been discovered among the educated, unemployed youth of Kashmir. Apart from bringing them income, it has also brought them recognition. “People appreciate our work and treat us like celebrities,” said Muhammad Imran Thakru of Kashmiri Back Benchers. “Some ask for selfies.” Kashmiri Back Benchers, with more than 6.90 lakh subscribers, was launched by Thakru and his friends—Adil Yousuf, Shabir Bhat and Arif Nabi—after their graduation in 2017. Having tasted success, the four friends plan to start a web series. “This is our livelihood and there is great potential in it,” said Thakru, a resident of Kanelwan in Anantnag.

These channels are also proving helpful in promoting Kashmiri language and culture to a generation born and raised in conflict. Kashmiri Comedy Kings, with 2.70 lakh subscribers, aims to keep the culture of Kashmir alive through the use of social media, which has a wide reach. It was launched by three youths from Mujgund in Srinagar—Mir Parvez, Shabir Ahmed Dar and Sahil Suhail—before the reading down of Article 370 in August 2019. All three have a theatre background, and so acting comes natural to them. “We first thought of starting a Facebook channel, but then we decided to turn to YouTube,” said Parvez. “My grandfather, Muhammad Ismail Mir, was an artiste. He inspired me to take up acting. Our motive is awareness through entertainment. We tackle social issues through comedy and small skits.” Parvez also taught music at one of Srinagar’s leading schools but quit as he wanted to be independent and entertain people.

Popular YouTube channels in Kashmir make money but not enough to save some for rainy days or to splurge. “Whatever we earn is divided among the people working together,’’ said a popular YouTuber. “A part of it is spent on making the video.”

The channels carefully plan the content, keeping in view the sensitivities of people in Kashmir and the security situation. The other problem is the erratic internet service in Kashmir, which witnessed the longest-ever internet shutdown after the revocation of Article 370. The shutdown forced the closure of many businesses dependent on the internet, including startups and IT-related initiatives.

Despite the challenges, these YouTubers keep creating content. The social impact of their videos is a great motivation, they say. After a video on the evils of dowry, a viewer called a YouTube channel and thanked them for highlighting the issue and promised to marry an orphan girl. In another incident, a family in Kupwara in north Kashmir called up Kashmir Rounders to tell them that their son, who had shut himself in his room and would often turn violent, enjoyed their comic videos and was now behaving normally.

No wonder, laughter is the best medicine.