Manipur on edge over killings of two Indian Tamils in Myanmar

There are nearly 5,000 Tamils in Moreh, Manipur, and around 10 lakh in Myanmar 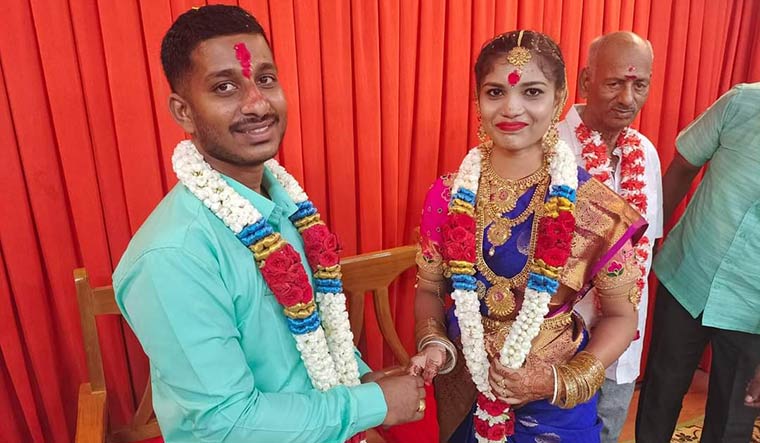 Bond, cut short: P. Mohan with Meenakshi at their wedding in June.

A BIRTHDAY PARTY invitation ended on a tragic note for M. Aiyanar, 28, and his close friend P. Mohan, 25.

Residents of Moreh in Manipur, Aiyanar and Mohan belonged to Tamil families that had fled Myanmar. The duo were allegedly shot dead in Myanmar’s Tamu, some 20km from Moreh, on July 5.

Both their wives were unhappy about their Tamu visit. Aiyanar’s wife, Gurmeet Singh, had dissuaded him from travelling to Tamu, considering the volatile situation there following the military coup in February 2021. Theirs was a love marriage; they courted for three years and were married for another three. They have an eight-month-old son. Gurmeet, a Sikh, too, has her roots in Myanmar.

“In Tamil Nadu, it is rare for a Tamil Brahmin to marry someone from another caste or religion,” said M. Mohan, Aiyanar’s neighbour. “But in Moreh, it is possible as we are all from refugee families, having been uprooted 60 years ago.”

P. Mohan’s was an arranged marriage, unlike Aiyanar’s. He married Meenakshi this June. With Covid-19 on the rise, the couple had postponed their honeymoon by a few months.

But neither Mohan nor Aiyanar—both of whom had shops in the Moreh market—had any qualms crossing the border to attend a friend’s birthday party. The Indo-Myanmar border is an open border with free movement regime that allows residents on both sides to travel 16km into either country without visa. Covid-19 had halted this movement since March 2020. Border security was further tightened following the coup. “But my son was desperate to go to Tamu,” said an inconsolable M. Devi, Mohan’s mother. 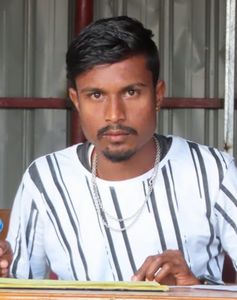 THE WEEK, in its cover story dated January 9, 2022, had written about the tunnel used by Myanmarese to reach Moreh to buy and sell goods. All such tunnels were recently destroyed by the Assam Rifles, which is in charge of border security. Despite that, the movement of people across the border continues.

“How much ever the security forces try, people of both sides with ethnic links cross the border often,” said K.B.S. Maniam, general secretary of the Moreh Tamil Sangam. “It was good for both sides as otherwise people living on either side could not do business and survive.”

Tamils in Moreh and Myanmar are bound by ethnicity, as their ancestors were first taken to Yangon by the East India Company as labourers along with people from present day Punjab, Bengal and Andhra Pradesh. Several Tamils returned to India and made Moreh home after the military junta toppled the government in 1962. There are around 5,000 Tamils in Moreh now. Many Tamils, however, chose to stay back in Myanmar. Today, around 10 lakh Tamils live in Tamu and Yangon.

“Myanmar’s radical Buddhists are against Christians and Muslims and they have tried to drive them out. But they never ill-treated Tamil Hindus in the past,” said Maniam, who also taught Aiyanar and Mohan in school. “This is for the first time that Tamils have been attacked.”

According to the National Unity Government (NUG), Myanmar’s government-in-exile, Aiyanar and Mohan were brutally beaten up and then hanged before being shot. Tamil Sangam representatives said that the duo was suspected to be agents of the People’s Defence Force (PDF), the armed wing of the NUG that has been fighting the military junta. The junta, in turn, created a militant group called Pyu Saw Htee to resist the PDF. Aiyanar and Mohan were allegedly killed by Pyu Saw Htee.

“My students could not trace the exact location of the birthday party,” said Maniam. “Their friends told them that it would be at a Buddhist temple. Our Tamil sources there told us that the military council-backed people shot them from close range, in broad daylight. It speaks volumes of the greatest human rights violation happening in Myanmar, which the world is not taking note of.”

The NUG, in a statement, said, “At the behest of military council, Indian insurgents, who are part of Pyu Saw Htee, are also behind the killing.” It claimed it had a record of the killings, arbitrary arrests and torture in jails by present military authorities in Myanmar. The killings of the Indian Tamils, said NUG, show that what was happening in Myanmar was no longer an internal matter, and that there was a security threat to India as well.

According to an Indian Army officer, Pyu Saw Htee “carry sophisticated arms given by China”. THE WEEK, in its January cover story, had reported on how Indian intelligence agencies and the Army think China could have orchestrated the coup in Myanmar to push drugs, arms and terrorists into India through the porous border.

Pyu Saw Htee, however, publicly denied the execution of Indian Tamils and instead accused the PDF of killing them.

But what surprised India was that despite several requests, Myanmar did not hand over the bodies of Aiyanar and Mohan. According to the NUG, the bodies were cremated the same day in Tamu. “That is very unethical and inhuman on the part of a country that claims to be a Buddhist state,” said a Manipur minister.

While the Assam Rifles refused to comment, an officer of the Eastern Command of the Indian Army, which supervises anti-insurgency operations in the northeast, said, “The incident took place in an area where neither the Army nor the Assam Rifles has control. The matter will be handled by the two countries at the appropriate level.”

Agreed Manipur’s Tribal Affairs and Hills Minister Letpao Haokip. “I cannot say anything now as the matter has gone to Delhi for consideration,” said Haokip, MLA from Tengnoupal, under which Moreh falls. He visited the two families with Chief Minister N. Biren Singh.

Following the killings, the Tamil community in Manipur took to the streets. The state government sent police and local officers to diffuse the tension. Days before the killings, the state had written to the Union home ministry, asking it to stall the border fencing—around 390km of the Indo-Myanmar border is unfenced—as there were protests over the position of some border pillars. A civil society group had alleged that some pillars were far inside the Indian territory from the actual border, and had even threatened to recruit suicide squads. But the home ministry continued constructing the fence in Moreh.

For the Tamils in Moreh, there is no fencing out the fear. “Our community was largely uprooted from Sri Lanka after a bloody war,” said M. Mohan. “We fear that if such a thing happens in Myanmar, then it would become another Sri Lanka.”