Kashmiri Pandits are fleeing the valley once again

Militants fear the BJP has plans to alter J&K's demography 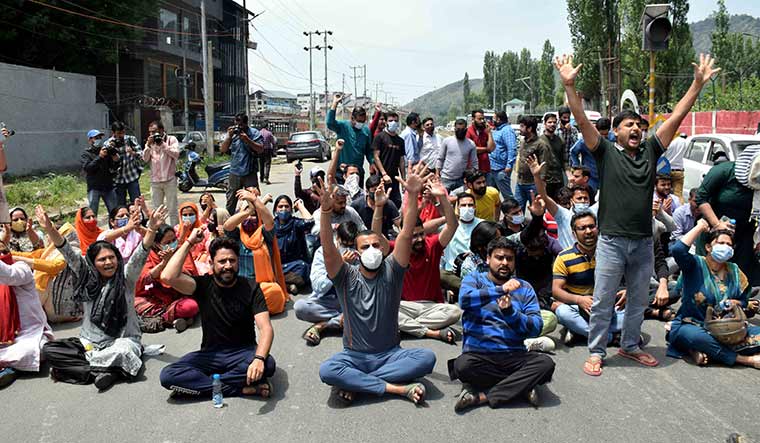 KASHMIRI PANDITS FLED to different parts of India after the community was targeted by militants in the late 1980s. According to official data, 64,827 Pandit families left Kashmir back then. In 2008, the Manmohan Singh-led United Progressive Alliance government announced the prime minister’s package (PMP), offering 6,000 jobs, in an attempt to bring the families back. The project was working well until the revocation of Article 370 in August 2019. Soon, militants started targeting non-natives and minorities.

Last October, prominent Pandit businessman M.L. Bindroo, who never left Kashmir, was shot dead. Supinder Kour, principal of a government school in Srinagar, and her colleague Deepak Chand Mehra were killed a few days later. Kashmiri Pandits have been living in fear since then.

The fear turned into panic after Rahul Bhat, 35, a Pandit employed under PMP, was shot dead on May 12 at the Chadoora tehsil office in Budgam district. It triggered protests by Kashmiri Pandits, mostly government employees, in Budgam, Qazigund, Pulwama, Ganderbal and Baramulla. They blocked roads and threatened to leave Kashmir, unless the government relocated them.

As protests intensified, Union Home Minister Amit Shah convened a meeting, which backed the J&K administration’s plan to post minority employees in “safe zones” in district headquarters or within three kilometres of municipal towns. But the Pandits are not happy.

Sanjay Raina, who lives with his family in the government migrant employees camp at Vessu in Anantnag district, said the decision was unacceptable. “The government is not bothered about our safety,” said Raina. “It is not just about our postings. We have to go to the market and our children need to attend school. How will we manage that?” Arvind Pandita, president of the migrant employees’ camp at Haal in Pulwama district, said many Pandits had fled to Jammu. “The government should relocate us at least till the situation improves.”

According to observers, the recent spate of violence is rooted in fears about an impending demographic change in Kashmir. Along with Article 370, Jammu and Kashmir also lost its statehood and limited autonomy. The valley was numbed into silence because of the security lockdown and communication blackout, and senior leaders like Farooq Abdullah, Omar Abdullah and Mehbooba Mufti were kept in detention for many months.

Fears of demographic change grew further after the Centre announced new domicile and land laws. The domicile law allows anybody with 15 years of residency in Jammu and Kashmir—10 years in the case of Central government employees and staff of public sector undertakings and banks—to acquire domicile certificates. The new land law allows all Indian citizens to buy land in Jammu and Kashmir. Regional parties like the National Conference and the Peoples Democratic Party said the laws were amended to alter Kashmir’s demography. In Jammu, too, it raised anxiety about losing jobs and businesses to outsiders. The matter died down temporarily during the pandemic. But once the restrictions were eased, targeted killings resumed. 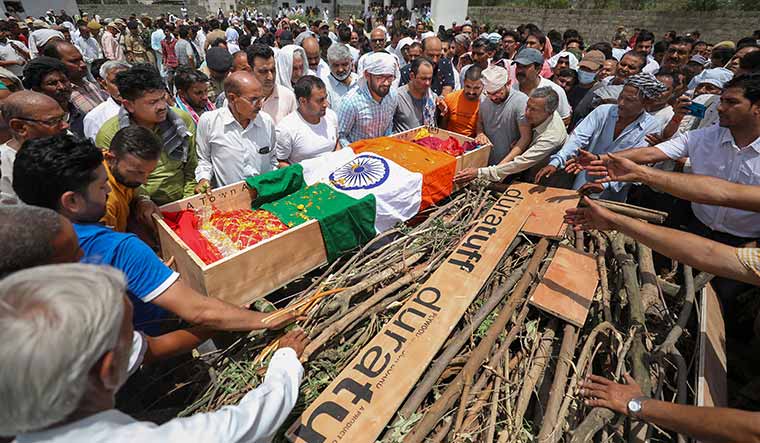 The Resistance Front (TRF), a new militant group which the police say is the Lashkar-e-Taiba (LeT) in disguise, started operating in Kashmir from August 2019. It is the first militant group to adopt a non-Islamic name after the Jammu and Kashmir Liberation Front (JKLF). After Bindroo’s murder, the TRF said he was an “RSS ideologue, involved in immoral trafficking and drug supply”. Kour and Chand were targeted because, according to the TRF, they had forced students to attend the Independence Day function at school.

Sanjay Tickoo, leader of the Kashmiri Pandits Sangharsh Samiti, has sought the Jammu and Kashmir High Court’s intervention to relocate all religious minorities living in Kashmir to a safe place outside the valley. Tickoo said the Hindus living in Kashmir wanted to leave, but the government was not allowing them to do so.

Observers said the killings would hit the government’s plan to attract investors to Kashmir. Last year, the J&K government, with the support of the Centre, held the first-ever Real Estate Summit to encourage people from across India to invest in real estate in Kashmir. At the summit, it was announced that the requirement mandating investors to be permanent residents of Kashmir was relaxed to facilitate more participation.

The government also announced an ambitious industrial policy to create five lakh jobs. Around 400 companies, including JSW Steel, had responded favourably. According to government sources, JSW Steel was allotted 6.25 acres near Srinagar for setting up a steel plant. Shah himself handed over the documents when he visited Srinagar last October. But with the deteriorating security situation, the policy has come under a cloud.

In 2022 alone, Kashmir has seen 19 targeted killings, busting the myth of normalcy which was woven around a tenuous calm and the increase in tourist footfalls. The Centre’s iron-fist policy seems to have contributed to the growing insecurity. It has marginalised key stakeholders, like regional parties and separatists. In the past, the Centre could lean on these groups to soothe tempers. That element is missing now. Almost the entire separatist leadership is in jail. Yasin Malik, the leader of the JKLF, has been sentenced to life. Jamia Masjid, the seat of Kashmir’s most influential Hurriyat leader, Mirwaiz Umar Farooq, has remained shut since Jammu and Kashmir became a Union territory.

Moreover, Jammu and Kashmir has been without a representative government since 2018 and its people are feeling disempowered. The Delimitation Commission’s decision to grant six more assembly seats to Jammu while giving just one additional seat to Kashmir, despite the valley having more people, has strengthened the feeling of disempowerment among Muslims. The depiction of Kashmiri Muslims in the movie The Kashmir Files, which portrays the crisis faced by the Pandits, has hurt the sentiments of the community. The regular sacking of government employees from Kashmir without an inquiry by invoking Article 311(2)(c)—which permits such a measure in case the president or the governor is satisfied that in the interest of the security of the state, it is not expedient to hold such inquiry—has also alienated Kashmiris.

Dissent has been criminalised across Kashmir. The Kashmir Press Club has been shut down and journalists are denied accreditation cards. People are detained every day under the Public Safety Act. Shouting slogans against the government attracts action under the Unlawful Activities (Prevention) Act.

Senior political leaders like the Abdullahs, Mehbooba and M.Y. Tarigami condemned the targeted killings, but blamed the BJP. The Peoples Alliance for Gupkar Declaration (PAGD), an alliance of regional parties seeking the restoration of Article 370 and statehood to Jammu and Kashmir, said the killings busted the administration’s narrative of normalcy.

“Bloodshed is a daily story in Kashmir,” said Tarigami, CPI(M) leader and spokesperson for the PAGD. “When the whole subcontinent was burning in 1947, Kashmir was the only place where no one suffered even a scratch. That is the tradition of Kashmir which we have to uphold and revive.”