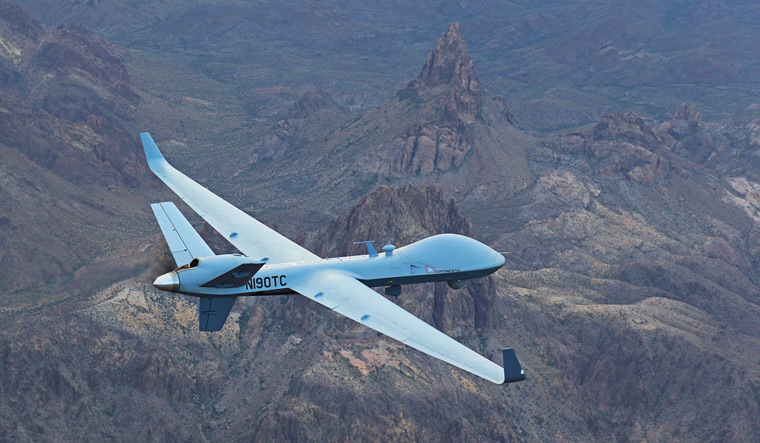 On January 3, 2020, US president Donald Trump took a brief break from his Christmas vacation at the Mar-a-Lago resort in Florida to make a dramatic announcement. He told journalists that the US military had “successfully executed a flawless precision strike” that killed Qasim Soleimani, the head of Iran’s Quds Force that had allegedly injured or killed hundreds of American civilians and military personnel. “He was a monster, but he is no longer a monster,” Trump said. “He is dead.”

Apparently, the operation was as dramatic as the announcement. Two MQ-9 Reaper drones had taken off from an airbase in Kuwait, travelled 600km to hover over Baghdad International Airport. When the green light came, the drones launched the missiles which took out two cars that were leaving the airport. The attack killed Soleimani and Abu Mahdi al-Muhandis, head of al-Hashd al-Shaabi (popular mobilisation forces), an Iran-backed militia in Iraq. The Reapers’ precision stunned the world.

Months earlier, Trump had cleared the sale of MQ-9 Reapers to India, making it the first non-NATO country to get the clearance. Now, India is concluding the acquisition process. The drones, also called Predator B, would be distributed among the three services­—10 each for the Army, the Navy and the Air Force. The Reapers come fitted with smart bombs and Hellfire missiles, and will form part of India’s response to the Chinese combat drone Wing Loong II, which Pakistan is buying.

The $3-billion deal will sharpen India’s offensive capabilities. At present, the Indian military operates drones only for surveillance and reconnaissance missions. The weaponised Reapers, say strategists, will give India the ability to remotely launch cross-border strikes and engage border targets. It will also help the Navy keep an eye on Chinese warships in the Indian Ocean.

Last year, videos of Armenian tanks and artillery positions being decimated by Azerbaijan’s drones showed the world the changing character of new-age wars. It is estimated that around 2,000 attack drones and more than 80,000 surveillance drones will be sold around the world in the next 10 years. According to Lt Gen (retd) D.S. Hooda, the architect of the Army’s 2016 surgical strike across the Line of Control, it is now an essential capability for a modern military to take out targets deep behind the enemy lines with “minimal” risk. “It is a much more convenient option to send armed drones [instead of fighter aircraft] to hit the target,” he told THE WEEK. “Cross-border strikes and Balakot-type airstrikes can be done without risking lives and aircraft.” 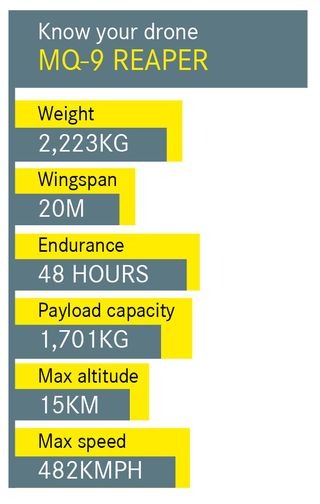 Under Project Cheetah, the Air Force is looking to upgrade its existing fleet of Heron drones for offensive missions. The medium-altitude, long-endurance Israeli drones, which serve all three services of the Indian military, are being fitted with laser-guided bombs and air-to-ground and air-launched anti-tank missiles. The Air Force, which is the lead agency for the project, will spend Rs5,000 crore on upgrades. India is among the few modern militaries that do not have armed drones. Even smaller countries like Nigeria, Somalia, Pakistan and South Africa have been using weaponised drones.

Manufactured by San Diego-based General Atomics, the Reaper has an endurance of 48 hours, and can carry a 1,700kg payload for more than 6,000 nautical miles. It comes with nine “hardpoints”—slots on an airframe designed to carry loads—that are capable of carrying sensors, missiles and laser-guided bombs. It can operate in adverse weather and is designed to survive lightning strikes.

According to Vivek Lall, chief executive of General Atomics Global Corporation, India-US defence ties are the result of decades of dedicated efforts by both countries to overcome traditional mindsets and align on common goals. “This is validated by the volume of trade and technology transfer existing today between the two largest democracies in the world,” he told THE WEEK. “We fully expect this trend to continue, and the fact that defence cooperation remains high on the list of priorities for bilateral relationship is a sign of these mutual security objectives.”

The Reaper platform has been a workhorse of the US military, producing models that have flown more than seven million hours, most of them in combat situations. The platform currently accounts for 11 per cent of all US air force missions, but only 2.6 per cent of total costs. The USAF drone fleet accumulates around three lakh flight hours a year, making it a favourite of military commanders around the world.

“No other family of platforms comes close to providing the capability, response, interoperability and utility of these aircraft, and we believe India will receive the same high value for investment that the US and other nations currently receive,” said Lall.

India had acquired its first unmanned vehicle in 1996—the Israeli Searcher Mk-I. Even now, drones India has are mainly Israel-made. The Defence Research and Development Organisation’s Nishant and Rustom drones are also used for surveillance and intelligence-gathering. India recently signed multiple contracts together worth Rs500 crore to buy Israeli “kamikaze drones”, which are essentially munitions that can search for and destroy targets.

Last year, the Navy had leased two Reapers for surveillance operations in the Indian Ocean. With its capacity to remain in the air for long, said Hooda, the Reapers can monitor and defend the China border. “It brings enormous offensive capabilities,” he said. “It is not going to replace manned fighter jets, but it brings advanced and additional capabilities.”