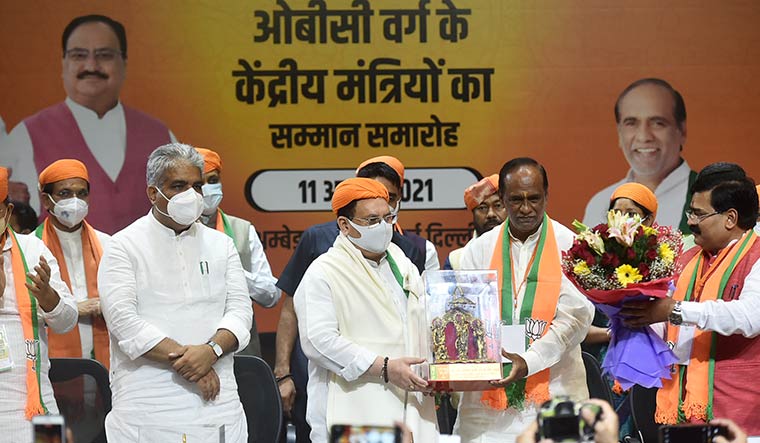 IN HIS EIGHTH Independence Day speech, Prime Minister Narendra Modi said handholding was key to bringing neglected castes into the country’s development journey. In this regard, he recounted the number of steps taken by his government—passing the 127th Constitution Amendment Bill that allowed states and Union territories to prepare their own list of backward classes, providing quota in medical seats and picking 27 OBC ministers for his government. If the first year of NDA 2.0 was defined by the push for its ideological agenda in the form of abrogation of Article 370, the Citizenship Amendment Act and the ban on triple talaq, its third year has a distinct social engineering touch.

The BJP government’s focus on other backward classes (OBCs) is a political move, aimed at including a large chunk of this unrepresented section in the power structure. The implementation of the Mandal Commission report in 1992 changed the country’s polity, particularly in the Hindi heartland. Key castes like the Yadavs and Kurmis benefited the most, rising to power, but other castes remained in the shadows.

The need for a shift in its politics was felt within the BJP soon after the party lost to Mamata Banerjee in West Bengal this May. Modi spent hours closeted with Home Minister Amit Shah and BJP president J.P. Nadda to decide the contours of the shift. It started with picking 27 OBC ministers from key Hindi heartland states. These 27 ministers represented 20 different caste groups within the OBCs. In Bihar, Chief Minister Nitish Kumar had tried a similar experiment as he brought in a separate category of extremely backward castes in 2007. These EBCs helped him retain power despite a strong anti-incumbency factor, even as the politically strong Yadavs sided with the Rashtriya Janata Dal.

The BJP will now take these 27 OBC ministers and 12 dalit ministers across the country to spread Modi’s message of affirmative action. The BJP says this will serve two purposes—create a new rung of OBC leaders, and also counter the influence of Yadavs in Uttar Pradesh and Bihar, represented by the Samajwadi Party and the RJD respectively.

BJP OBC Morcha president K. Laxman said OBCs would play a vital role in the upcoming elections next year. “We will organise community-wise meeting, explain to them how the Congress has betrayed OBCs and treated them as vote-bank,” he said. “It is Modi ji who is focused on the marginalised sections. The so-called champions of OBCs like Mulayam Singh and Lalu Prasad did not do anything when they were in the Congress-led United Progressive Alliance (UPA). Even if there is a law, it is of no use till it is implemented, as executive agencies are not sincere at all. It was the Modi government that gave Constitutional status to the National Commission for Backward Classes.”

The biggest test for the BJP will come in Uttar Pradesh, where elections will be held early next year. More than 54 per cent of the state’s population is OBCs, of which 35 per cent are non-Yadavs. In 2016, Shah had appointed OBC leader Keshav Prasad Maurya as state BJP chief. The BJP went on to ally with the Apna Dal and Suheldev Bhartiya Samaj Party, who represented Kurmis and Rajbhars respectively. Shah’s strategy got the party 306 seats in the 2017 polls. The castes that supported the BJP in 2017 and in 2019 Lok Sabha polls were given representation in state and Union cabinets.

Today though, the Yogi Adityanath government is being criticised for its handling of the second wave of Covid-19. And, the other castes are restive. This OBC outreach is to woo them. With Mayawati losing political steam, it is Samajwadi’s Akhilesh Yadav who may emerge as the main opposition to the BJP. The BJP’s OBC outreach, however, could confine Akhilesh to his Yadav caste.

Also, the BJP did not shy away from taking credit for the decision allowing 27 per cent reservation for OBCs in the all India quota for medical seats, even though it came about following the court’s nudge. A similar reservation was made for OBC students in Kendriya Vidyalayas, Navodaya Vidyalayas and Sainik Schools. The BJP will use these to remind OBCs, most of whom will be first-time voters in 2024, of Modi’s efforts.

Modi’s key decision to bring the 127th Constitutional amendment bill will have immediate effect on some key castes that did not benefit in the post-Mandal Commission era. The amendment was brought in after the Supreme Court, this May, struck down the Maharashtra government’s decision to give reservations to Marathas, saying that the OBCs list can only be decided by the Centre.

If politically strong Marathas demanded OBC status in Maharashtra, Patels agitated in Gujarat and Jats in Haryana. Now, the state government will have no choice but to give in as these castes are numerically strong and can help make electoral gains. Owing to the farmers’ agitation, the Jats had turned against the BJP. But this new reservation promise can bring them back into the BJP’s fold.

But it is not just the BJP that is eyeing the caste quota. In an otherwise washed-out monsoon session of Parliament, the amendment bill was supported by all political parties; none of the members present in both the houses opposed the bill.

But this outreach by the Modi government has had an undesired after-effect—a demand for a fresh caste-based census. Leaders from across parties, from Akhilesh to Lalu to NCP chief Sharad Pawar, have asked the government to conduct a caste census along with the 2021 census. Replying to a question in Parliament, in July, Minister of State for Home Nityanand Rai, who belongs to the OBC, said the government had taken a conscious decision not to conduct fresh caste census, but would continue with counting Scheduled Castes and Scheduled Tribes.

“Why is the government running away from caste census?” asked Congress MP Abhishek Manu Singhvi in the Rajya Sabha. He said that the government, despite a demand for a caste census from BJP allies (like Nitish Kumar and Union Minister Anupriya Patel) and its MP (Sanghamitra Maurya), was quiet because it would increase the reservation to 35 per cent.

The last caste-based census was done in 1931, which put the population of OBCs at over 50 per cent. The UPA, following a raucous debate, did conduct a caste census, though separately from the 2011 census. It, however, did not publish that report, saying there were many gaps in it. The real worry for mainstream parties is that the caste census may show that the OBC population has gone up substantially, which would translate into demands for increased reservation. Many states, based on their regional surveys, have already overshot the 50 per cent quota limit.

The BJP-led government might find itself cornered over the increasing demands for a caste-based census. The RJD has initiated state-wide protests, while Nitish Kumar has sought time from the prime minister. Parties like the JD(U), the RJD and the Samajwadi Party emerged in the aftermath of the Mandal Commission, as it sent the aspirations of the backward classes soaring. Now, when the BJP is eating into their vote-bank, a fresh caste-based census could revive these parties and change the country’s political landscape once again.

“We have a backward caste person as a prime minister, but they [opposition] only think in terms of their family and dynasty,” said Laxman.

But there is no denying that the BJP will have a hard time countering the demands for a caste census. A caste-based census will harm its homogenous hindutva appeal. The RSS, too, is against it as it may cement caste identities, but it has clarified that reservations should continue. Laxman said that there were many legal and operational issues in conducting a caste census. “But we are not against it,” he said.

The ball is now in the opposition’s court.