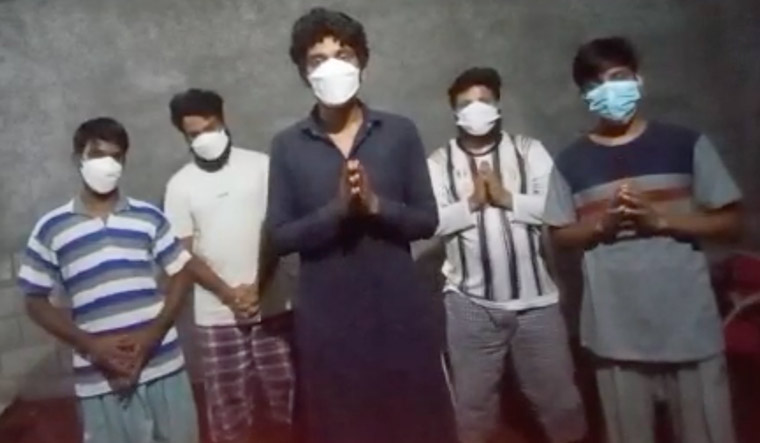 IN JULY 2019, Aniket Yenpure, 29, and his friend Mandar Worlikar, 26, left Mumbai for Iran to join the crew of the MV Artin 10, an Iran-flagged bulk carrier. Their placement agent, Ajit Singh, had promised them jobs as sailors. Six months later, they were jailed in Chabahar, Iran—where India, Iran and Afghanistan are together developing a port. And, the Mumbaikars were not alone. The vessel had three other Indian sailors—Naveen Singh from Uttarakhand, Pranav Kumar from Bihar and Thamizhselvan Rengasamy from Tamil Nadu.

The sailors were jailed for 403 days and released in March 2021. But as the authorities have not returned their passports, they are stuck in Iran. What started as a journey of hope has turned into a nightmare for them.

In a video message recorded on July 11, the group made an earnest appeal to the Union government for bringing them back to India. “Respected Prime Minister Narendra Modi, we are making this video for our repatriation,” Yenpure could be seen saying in the video. “We were jailed on false charges and [were] framed by our ship-owners and placement agents…. Please help us.”

It all started in early 2019 when Yenpure, who has completed Class 12, got in touch with Singh. The latter had promised him a “well-paying” job in the merchant navy for a fee of 05 lakh. Aniket’s family, residing in Mumbai’s Worli Koliwada, pawned gold to raise the money. Aniket convinced his friend Worlikar to do the same.

A few days after they had paid up, Singh asked the youth to fly to Iran and join the Artin 10. The duo boarded the vessel in Chabahar and began their voyage. Both Yenpure and Worlikar were in regular touch with their families back in India and were “happy” of embarking on a new path. But as Yenpura’s father, Shyam Yenpure, says, the relief and excitement lasted only for a short while.

On February 20, 2020, around midnight, the ship dropped anchor about 140km off Muscat, Oman, and took on 300 gunny sacks from another vessel. Yenpura and other Indians were told that the cargo was rice. In reality, the sacks contained 1.5 tonnes of morphine. Sensing that something was amiss, the sailors shot the loading operation on their phones, intending to report it to the authorities at the nearest port.

But, before they made port, Iranian authorities boarded the vessel near the Strait of Hormuz, found the drugs and charged the crew with “criminal conspiracy and smuggling narcotics”. “My son and other Indians were supposed to sign off from the ship in January 2020,” says Shyam. “But the captain informed them about a change in schedule saying that the ship will be docking in Oman to load cement bags and then in Kuwait to offload the cargo.”

After the arrest, the Indian crew members were not allowed to talk to their families for almost a month. In March, a local court in Chabahar pronounced them innocent and ordered their immediate release. However, the uncertainty continues as they are barred from leaving Iran.

“We are literally at the mercy of the locals here,” Yenpura told THE WEEK. “We did not have any trouble inside the jail; they [Iranian authorities] gave us food and took care of us. But now that we have been acquitted, it is frustrating to be stuck here. Even now we feel as if we continue to be under their radar. With no money and no means to earn—because we have no documents—it is getting increasingly difficult to pass each day.”

The Indian embassy in Tehran has assured the families of the seafarers that their sons would be back home soon. “But the worry keeps mounting with each passing day,” says Shyam. Last month, he wrote to the ministry of external affairs and the prime minister’s office. But he is yet to receive a reply. On July 19, the families filed a public interest litigation in the Delhi High Court seeking legal and counsellor services for the seafarers.

“The Indian embassy in Iran has not come to their aid,” says Shyam. “It is even more frustrating because we were duped of so much money, and my son did not even get any [countable] sailing experience.” He hopes that the Union government would soon take note of the plight of the five seafarers.