India is bolstering its defence against small drones

Welcome to the new era of terrorism in India,” said a key Indian military intelligence officer after drones dropped explosives on the Jammu Air Force station on June 26.
It exposed the chinks in the military’s armour. While India’s air defence mechanism of advanced radars and missiles can chase down fixed-wing aircraft, helicopters and large unmanned aerial vehicles (UAVs), it is mostly ineffective against small drones. In Jammu, the drone managed to penetrate multiple layers of security and target the Mi-17 helicopters and transport aircraft parked at the station.

“While such drones are easily available, the methods to counter them should be hi-tech,” said Lt Gen (retd) D.S. Hooda, former chief of the Northern Army Command. “Currently, the Army or the Air Force does not have the technology to counter small drones.” The defence establishment is worried that the low-intensity blast could be a trial to gauge penetration, signal links, blast effects and ground response.

Within 24 hours of the Air Force station attack, two drones were spotted over the Kaluchak and Ratnuchak military stations in Jammu. Security personnel fired at them, but could not bring them down. The drone attacks happened on the day Defence Minister Rajnath Singh was visiting the Union territory of Ladakh.

Small drones are cheap and easily available, and widely used by hobbyists and professionals. Some 24,000 drones are registered with the government. The use of these drones includes reconnaissance, imaging, damage assessment and payload delivery. Medicines from the Sky, for instance, is a Telangana government pilot project for delivering emergency medicines and blood to remote areas. It is estimated that the market potential for drones in India is around rupees three lakh crore, including defence and commercial purposes. 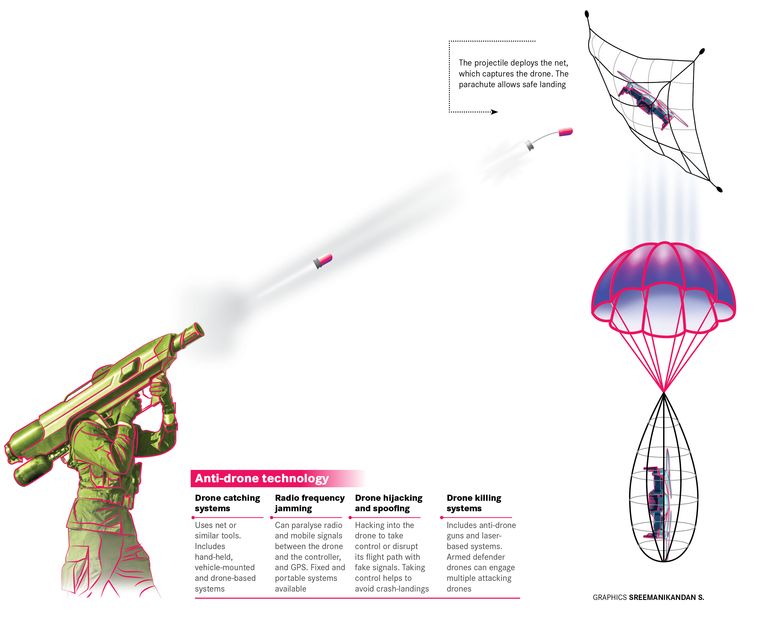 An official blueprint prepared by some central agencies says that unregulated drones, UAVs and remotely-piloted aircraft are a potential threat to vital installations, sensitive locations and specific events. During an inter-ministerial discussion on unmanned aircraft system rules a week ago, the armed forces wanted drone operations to have at least 80km buffer from any military, strategic or high-value installations. As per the existing rules, any drone weighing more than 250gm can only be flown by a remote pilot with permission from the Directorate General of Civil Aviation for every flight.

Security agencies are now in search of anti-drone technologies like sky fences, drone guns and drone catchers. Air defence systems like the Israeli Spyder or the Russian OSA-AK are not feasible for small drones. Derby missiles used by Spyder cost about $2 million. Helicopter fleets of Mi-17V5 and Apache can be effectively used against them, but the cost would be prohibitive. The Navy recently purchased the Smash-2000 fire control system from Israel, which can be used to thwart drone attacks. Last year, an anti-drone technology developed by the Defence Research and Development Organisation was used for the first time at the Red Fort during Prime Minister Narendra Modi’s Independence Day address.

Group Captain R.K. Narang, who has written a book on India’s quest for UAVs and the challenges in the journey, said the threat from drones is nothing new, but it becomes significant when it is posed by small, slow and low-flying drones. “Air defence mechanisms are meant to detect bigger airborne platforms that are coming at high speed. Size, altitude and speed are defining the new air-defence challenge. Now drones are lighter and made of materials that do not have a radar signature, and they fly low,” he said.

There are fixed and portable RF (radio frequency) jammers capable of jamming the radio, global positioning systems (GPS) and mobile signals between the drone and the pilot. A virtual aerial fence system that uses signal disruptors to jam the flight path is another way to tackle a lethal drone. Then there are drone catchers which chase an enemy drone and grab it by throwing a net around it.

While there is no clarity on which technology India would go for, trials are going on. Brigadier (retd) Ram Chillar, who works for C1 Cyber Solution at Crown Group, is developing a low-cost handheld anti-drone gun for the armed forces. “Handheld anti-drone systems are capable of detecting and neutralising drones. Weighing 3kg, this gun can easily be integrated into mobile platforms. It has a range of 2km, but we are trying to extend it,” he said.

DRDO has developed two anti-drone, laser-based DEW (directed energy system) systems to engage aerial targets, but they are yet to be manufactured in large numbers.

Meanwhile, fingers are being pointed at Pakistan, as intelligence agencies suspect the drone in Jammu might have crossed the International Border, which means it covered around 28km. The tracing of the drone’s path will be one of the major points of the investigation by the National Investigation Agency. The NIA has registered a case under the Unlawful Activities Prevention Act.