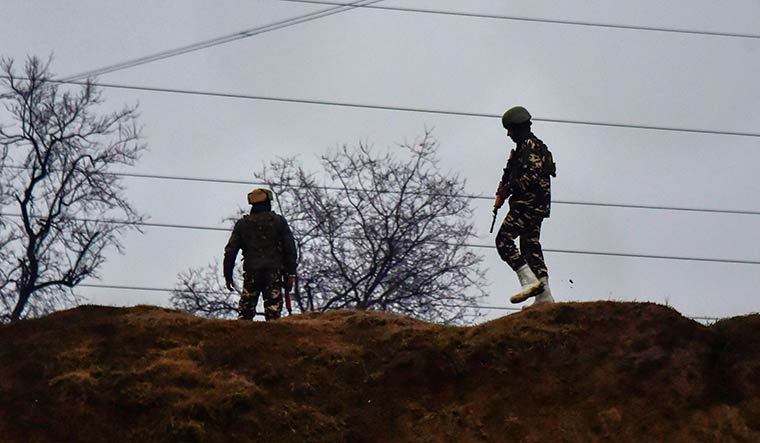 Tough job: Soldiers near the site of a suicide bomb attack at Lethapora Awantipora in Pulwama district | PTI

BETWEEN 2018 and 2020, the Central Reserve Police Force lost 131 men to suicide. Of the 45 such deaths in 2020, the most cases (13) were in Jammu and Kashmir. While maintaining law and order in the militancy-torn region is stressful, the main reason for most suicides and fratricides was reportedly domestic discord.

Last September, Madan Singh, a CRPF constable in Jammu, opened fire with his service rifle, killing his wife and injuring his sister-in-law. Miraculously, his eight-year-old daughter escaped. A probe revealed that Singh went berserk after an altercation with his wife.

Such cases have prompted the CRPF to introduce a programme on mental health and gender sensitivity for its personnel. It has roped in experts from Amrita Vishwa Vidyapeetham, Kerala, and Delhi-based People for Parity. In January, experts from Amrita Vishwa Vidyapeetham trained 48 officers, including women, in Kashmir. The trained officers have been conducting regular counselling sessions for their colleagues; they intend to cover all 25,000 personnel deployed in Srinagar by June, followed by other CRPF formations in Kashmir.

THE WEEK had exclusive access to one such training session in Srinagar. The trainers talked about gender, importance of family bonding, and thoughts and emotions that cause an impulsive reaction. The session laid bare the worries of the CRPF personnel, too—apart from spousal conflicts, they said that providing for the family, arranging a sister’s wedding and building a house dominated their thoughts while on duty far from home. Others who have served in the force for many years said that children’s future and education concerned them the most.

Assistant commandant Javid Ali, a trainer, described the issues listed by CRPF personnel as “the burden of patriarchy”, owing to set gender roles. A CRPF personnel does his duty round the clock, and has to shoulder most of the responsibility at home as well, explained Ali, 35. “We are counselling them on how to find a middle path and strike a balance,” he said.

A suggestion given during training was to empower women, especially wives. Assistant sub-inspector Jatinder Singh Jhatav put that to practice. “I got married ten years ago and have two kids,’’ said the 45-year-old Udaipur resident. “I am from a village and my wife is from the city, and there were compatibility issues between us.” Also, his wife and mother would often complain about each other and that would leave him stressed. The programme gave him clarity. “I asked my wife to handle the finances, kids’ schooling and home errands,’’ he said. “My wife feels emancipated.” He also calls his mother regularly, which makes her feel important, he observed. “My mother and wife have developed a better understanding,” he said.

Constable Sat Prakash, 33, from Madhya Pradesh, said the programme helped him appreciate different viewpoints and negotiate difficult situations. Assistant commandant Monica Salve, 31, said many men from economically weaker backgrounds join the force at a very young age. “The organisation trains them physically for the job, but they lack the emotional maturity to handle pressures that come with the job,” said Salve, the programme coordinator. “This programme trains young troopers on how to handle a pressing situation and remain unscathed.”

Young men who stay away from their families and lack experience in handling a long-distance relationship with their partners, said Salve, feel that they are “living half a life”. “So, we train them to empower their partners and not worry about the responsibilities at home,” she said. When a young soldier deployed away from home fails to develop a healthy relationship with his partner, said Salve, he can feel hopeless. “There is a possibility that he may commit suicide or fratricide,” she said. “That is why we are [training] every personnel to prevent them from committing impulsive acts.” 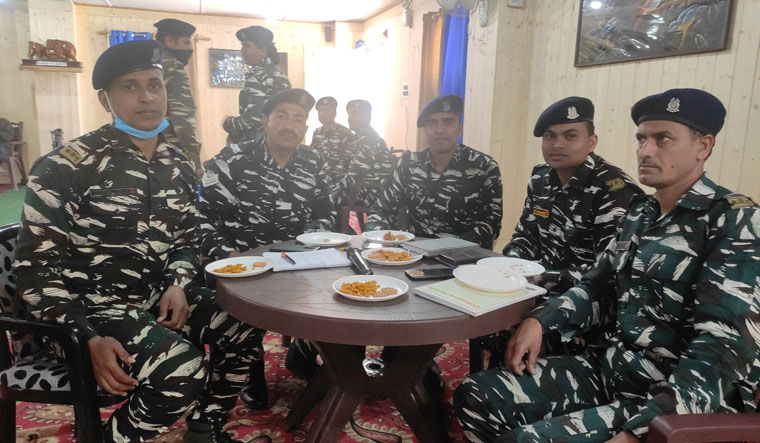 B.S. Rajput, who hails from Jhansi in Uttar Pradesh, said that as it is they work in a hostile situation and when some problems crop up at home, it leaves them distraught. “My mother would call and complain about my sister-in-law,’’ said the 33-year-old head constable. “I used to think that my mother was at fault as my wife and sister-in-law were managing both home and kids perfectly.” Thanks to the programme, he now gives his mother a patient hearing. “My mother is happy now. She feels I value her point of view,’’ he said. “I also counsel my wife and sister-in-law and that has helped ease tensions at home.” He added that several CRPF men would not have committed suicide had the programme been introduced earlier.

Head constable Vinodh Kumar from Kangra in Himachal Pradesh, who has been in service for 23 years, said the programme helped him strike a balance in his relationships, be it with his mother, wife or two children.

Likewise, the sessions helped R.K. Singh from Jharkhand mend his relationship with his parents. He married a woman of his choice, which his parents disapproved. “We had stopped talking to each other,” said the 39-year-old constable. “After attending the programme, I decided to reach out to my parents and now things have normalised between us.”

The programme seems to have been a success, and a few personnel think that it need not be restricted to them. Constable Narendra Verma proposed that civilians in Kashmir, too, should be a part of it. “They think of us as outsiders who should be forced out,’’ said the 28-year-old from Nalanda, Bihar. “If they sit through the programme, they will have a better understanding of our point of view.”