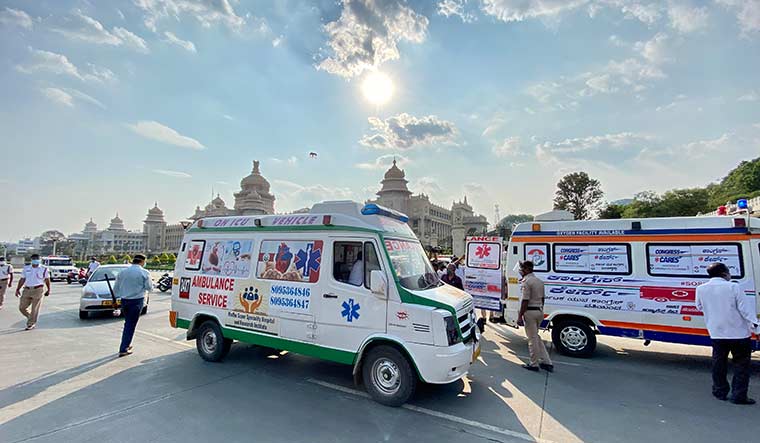 Waiting for succour: Ambulances carrying Covid-19 patients parked in front of the Vidhana Soudha in Bengaluru.

KARNATAKA HAS been under siege since the second wave of the pandemic struck in April. New cases have been surging, from 4,231 on April 1 to 47,930 on May 9. The worst hit has been Bengaluru, where critical patients are being ferried from one hospital to another in search of oxygen, ventilators and ICU facilities.

The desperation is such that some people even drove ambulances, carrying their loved ones who were gasping for breath, to the chief minister’s residence. Amid the health-care logjam, even the city’s high and mighty are finding it difficult to find beds and treatment facilities.

Since the state government had been in stupor for months, even aggressive efforts to pool treatment facilities could ensure only 11,693 hospital beds across Bengaluru. People are battling not just the virus, but a complacent and allegedly corrupt administrative system.

Tejasvi Surya, Bengaluru South MP and BJP leader, recently said he had unearthed a bed allocation scam in a Covid-19 war room run by the Bruhat Bengaluru Mahanagara Palike (BBMP). More shocking than the allegation itself was that Surya gave a “communal twist” to it, naming 17 Muslim workers who were part of the war room, demanding to know how they were recruited, and alleging that there was rampant corruption in allotting beds.

The allegation caused a furore; the accused were soon suspended and investigation ordered. While Surya has been accused of playing communal politics, his allegation has inadvertently paved the way for the much-needed systemic reforms that Bengaluru urgently needs. Every day, around 20,000 new cases are reported in the city, while more than 8,000 patients (and nearly 19,000 across the state) have died.

It was on May 4 that Surya and three BJP legislators—Satish Reddy of Bommanahalli, Ravi Subrahmanya of Basavanagudi and Uday Garudachar of Chikpet—entered the Covid war room in the city’s south zone. During their inspection, which was live-streamed, they apparently found that more than 4,000 hospital beds that were blocked from being alloted were “automatically unblocked”.

“During the audit, we noticed that 4,065 beds had undergone auto-unblocking,” said Surya. “We called up the patients against whose name the beds were initially [booked] and learnt that they were all in home isolation. They were never admitted to the hospital. A single BU number (each person who tests positive gets a BU number) of a patient in home isolation was used to block five to 20 beds, which were then sold to other patients for a hefty sum.”

The workers in the war room were allegedly charging as much as Rs40,000 for a single bed. “Bengaluru has not run out of hospital beds to treat Covid-19 patients,” Surya said. “The suffering is because of the artificial scarcity of beds created by corrupt officials in the BBMP war room.”

According to him, the officials used to make calls to identify Covid patients in home isolation. Hospital beds were then booked against BU numbers of patients who were recovering at home. A bed would get automatically unblocked if the patient did not turn up at the hospital within 12 hours. Beds that are thus unblocked are manually re-alloted to patients chosen by commission agents, who search social media for people who are willing to pay.

“These officials are denying beds to patients who are gasping for breath,” said Surya. “This isn’t just corruption; these are vultures.” 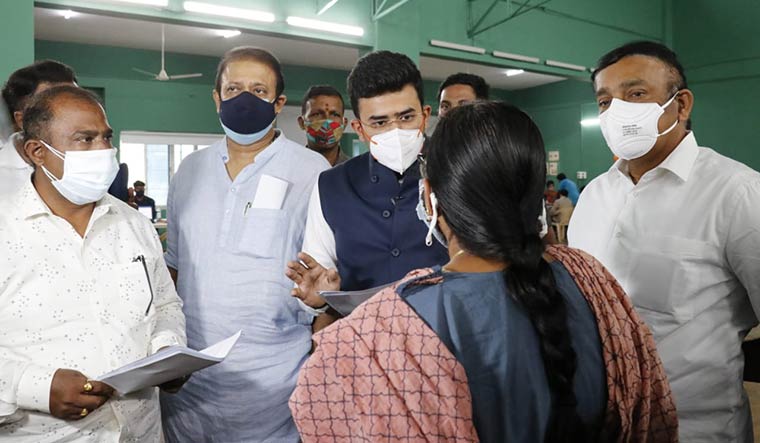 Kicking up a storm: Tejaswi Surya at the Covid war room in Bengaluru’s south zone on May 4.

Reddy said he knew a patient who was forced to give Rs25,000. “The agents asked the patient’s family to transfer money through GPay,” he said. “Even us, the elected representatives, are unable to help people find a bed; but the agents can, if you are ready to pay.”

Garudachar said the corruption had made legislators helpless. “I had requested [the war room] to reserve five beds for each MLA, as we get at least 65 distress calls a day. But the war room does not respond to our calls. I urge the government to replace all people in the war room with honest and efficient officers,” he said.

Sources in the war room say people have been manipulating software to enable out-of-turn allotment of beds. Bureaucrats have been under pressure from the barrage of calls from VIPs, and the acute shortage of beds—especially oxygen, ventilator and ICU beds—has exacerbated the crisis. The central crime branch of the Bengaluru Police, which is inquiring into the alleged scam, has arrested seven persons, including two officials of the south-zone war room, employees of private hospitals, and a suspected agent.

Surya’s allegation has also triggered a political slugfest. After storming the war room, he had named only Muslims while referring to the scam. “Is it a madrassa or a corporation war room?” asked Ravi Subrahmanya, who is also Surya’s uncle.

Saleem Ahmed, working president of the Congress’s state unit, said Surya was stoking communalism instead of questioning the BJP government. “[He] spared the war-room administrator, the head of the Covid task force, and the health minister. Instead of questioning them, he selectively named 17 workers who belonged to a particular community. I condemn the MP’s communal and childish statement,” said Ahmed.

Syed Naseer Hussain, Congress leader and Rajya Sabha member, said Surya had a history of targeting Muslims. “He blamed the Tablighi Jamaat for the spread of the virus. He made derogatory statements about women and orgasm. He referred to Muslims as ‘puncture-wallas’ during the protests against the Citizenship (Amendment) Act. And now, he has picked on 17 of 205 workers outsourced by the war room from Crystal Infosystems, a company recommended by a BJP minister,” said Hussain.

Some Congress leaders see Surya’s move as a veiled attack on Chief Minister B.S. Yediyurappa. Surya, 30, is a poster boy of hindutva in Karnataka, and he belongs to a faction in the BJP that opposes Yediyurappa. There is also a view that the allegations are meant to divert attention away from a tragedy in Chamarajanagar, where oxygen shortage had resulted in the death of 24 Covid patients in the first week of May.

According to Congress leader and Chamrajpet MLA Zameer Ahmed Khan, of the 17 employees accused of corruption by Surya, only one—a 20-year-old pre-university student named Mohammad Zaid—was assigned to the task of allotting beds. Zaid told THE WEEK that BBMP officials, perhaps aware of Surya’s plans, had asked all 17 of them to leave the war room before Surya’s visit. “We were not aware that the MP had read out our names,” said Zaid. “We were also asked to stay away from office until the matter subsided.”

Zaid was a data-entry operator in the team that managed bed allotments. He was recruited in July last year for a monthly salary of Rs12,000. “The second wave was overwhelming,” he said. “I work the 8am-to-4pm shift. We used to attend 10 calls a day last November. Last month, we were getting 80 to 100 calls.”

War-room workers say the scandal, which came at a time when they were risking their lives, was “demotivating”. “The allegations have saddened us,” said Zaid. “My parents are worried, and they have asked me to quit the job.”

In what feels like an anti-climax to the controversy, Satish Reddy is now facing allegations that he had earlier tried to unlawfully book beds. He and his supporters had allegedly entered the Bommanahalli war room on April 30, demanding that beds be allotted to patients in his constituency. “When IAS officer V. Yashwant, who is in charge of the war room, did not yield to the demand, he was manhandled by the MLA’s supporters,” said the IAS Officers’ Association in a complaint submitted to Yediyurappa.

Meanwhile, Surya has taken it upon himself to revamp the BBMP’s bed allocation software. He has sought help from technocrat Nandan Nilekani. “After the chief minister gave us the nod, our team of senior BBMP officers and tech architects from iSPIRT (Indian Software Product Industry Roundtable), Infosys, eGovernments Foundation and Sahyog plugged the loopholes in the software to make the system efficient and transparent, and minimise manual intervention,” said Surya.

The state government, too, has swung into action, setting up ward-level triage committees across Bengaluru and appointing nodal officers to identify and monitor isolation centres and bed allotment. “We are increasing [the capacity of] the 1912 helpline, from 60 lines to 250 lines, to reduce the waiting period for callers,” said Arvind Limbavali, one of five ministers who are in charge of streamlining the state’s Covid response. “Nodal officers will be physically present at private hospitals to monitor government-quota beds, and a centralised system that allots beds based on the pin code of the patient will be put in place soon.”