Karnataka scholars rubbish claims that Hanuman was born in Tirupati 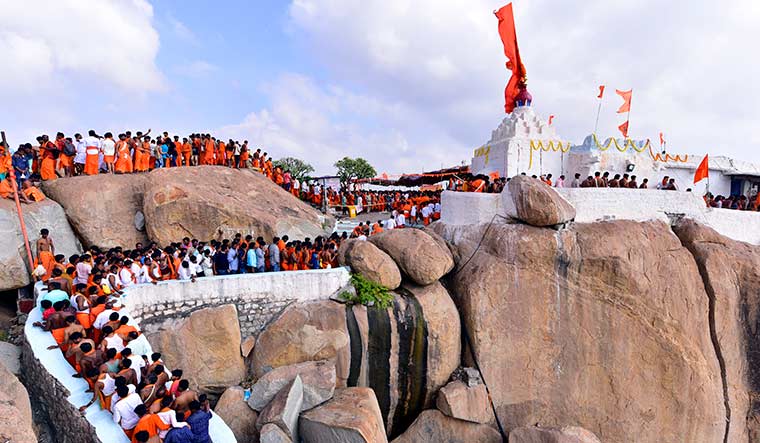 Land of hanuman: Anjanadri Betta in Karnataka | Satish B Mural

Anjanadri Betta—a hill on the left bank of the Tungabhadra River in Karnataka’s Koppal district—has been revered for years as the birthplace of Lord Hanuman. But, every now and again, there are other claimants to the birthplace—Anjaneri in Nashik, Maharashtra; Anjan hill in Navsari, Gujarat; Anjan village in Jharkhand; and Gokarna in Karnataka. The latest claim comes from the Tirumala Tirupati Devasthanams (TTD) in Andhra Pradesh, the custodians of the richest Hindu temple.

On Ram Navami (April 21), the TTD produced what it called “irrefutable evidence” to prove that Japali Theertham, a holy site on Anjanadri hill in Tirumala, was Hanuman’s actual birthplace. It is believed that a sage, Japali, had done penance there, and Hanuman had appeared before him. A section of devotees believes that it was the exact spot where Hanuman was born, which is why Japali chose it.

Karnataka, which prides itself as the land of Hanuman, was rankled by the trust’s “arbitrary” research; some scholars have alleged that the research was driven by commercial interests.

“Our evidence is not based on some mythological versions,” said V. Muralidhara Sharma, panel member and vice chancellor of the National Sanskrit University. “We have worked day and night to back the popular belief with proof available in religious literature and inscriptions.”

According to the panel, Hanuman was born in the Treta Yuga to Anjana Devi. She had been asked to perform penance on Venkatachalam hill to be blessed with a son. After Hanuman was born, Venkatachalam became known as Anjanadri. Pointing to texts such as Skanda Purana, Varaha Purana and Brahmanda Purana, Sharma said that after baby Hanuman was punished by the gods for leaping into the sky and trying to eat the sun, Lord Brahma had consoled the heartbroken mother by naming the region after her.

The panel also claimed that, in some religious texts, the exact location of Anjanadri is described by landmarks. “The inscriptions found in temples in Kanchi and at other places also talk about Anjanadri,” said Sharma.

The panel said the other claims were “baseless”. “We did not find anything concrete to suggest Lord Hanuman was born in Chhattisgarh, Haryana or other places,” said Sharma. “They are just local beliefs.”

The panel has released a 20-page booklet, and will soon submit a 200-page book to the TTD. 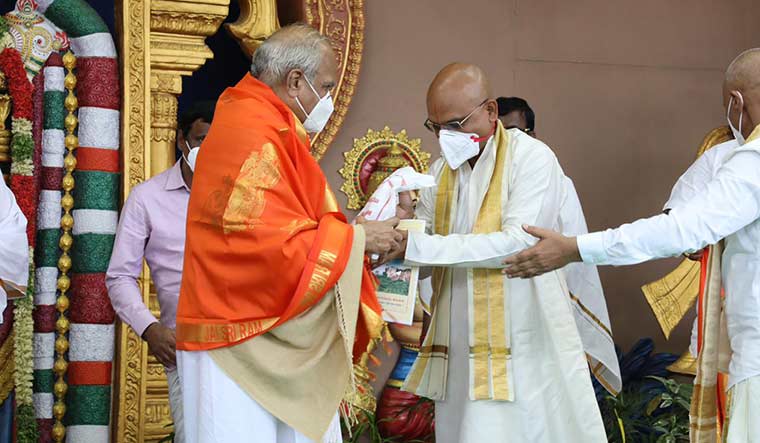 Matter of faith: On April 21, the TTD produced “irrefutable evidence” to prove that Japali Theertham was Hanuman’s actual birthplace.

Scholars and historians in Karnataka, meanwhile, have cited the Valmiki Ramayan, along with ancient inscriptions and manuscripts, to reinforce their claim that Anjanadri Betta in Anegundi town, near Hampi, is the real birthplace of Hanuman.

According to local historians, Anegundi was the citadel of the Vijayanagara Empire before Hampi was chosen as the capital. Hampi is believed to be the place where Lord Ram, who came in search of Sita, met Hanuman for the first time.

“We will soon petition the Centre, demanding that Anjanadri Betta be officially declared as the Hanuman janmasthal (birthplace),” said Amaresh, son of Koppal MP Sanganna Karadi.

Said Dr Sharanabasappa Kolkar, a historian in Koppal: “The TTD panel admits that Hampi is Kishkinda, but claims that Venkatachalam is Anjanadri. This is not only childish, but also illogical. Vali, Sugreeva and Hanuman were the warrior kings from the Vanara kingdom, which is in Kishkinda. The TTD draws its evidence from Sthala Puranas like Venkatachala Mahatmya, which are recent works. For us, Valmiki Ramayan has the most ancient and authentic geographical references and the description of the terrain and landscape of Kishkinda… Now, how can Hanuman, who was the minister of King Sugreeva, be born in Tirupati? Moreover, Tirumala-Tirupati is known as Venkatadri hills (Venkatachala Betta). As the TTD claims, if Tirupati hills is known by 19 names and Anjanadri is just one of them, why did they restrict their research and discussion to Anjanadri alone?”

Dr Ram Avtar Sharma, head of the National Committee on Ramayana Circuit, told THE WEEK that the references in the Valmiki Ramayan strongly indicated that Hampi was Hanuman’s birthplace. “The epic… twice [mentions] that Hanuman was born in a cave and that a young Hanuman fell on Udayagiri Parvat (hill) when an angry Indra struck him,” said Ram Avatar. “Hanuman’s father, Kesari, lived on Malyavant Parvat and his kingdom was on Sumeru Parvat; none of these places exist in Tirupati. [There is no mention of] Hanuman having visited any other region [apart from Hampi].”

Ram Avtar is working on developing all the places associated with Ram and the Ramayan. Incidentally, Tirupati is not one of the 15 places on the national panel’s list.

On the foothills of Anjanadri Betta are villages named Anjanahalli and Hanumahalli; many girls in the area are named ‘Anjana Devi’, including a former panchayat president of Anegundi.

It is not just the Hindus who revere Hanuman. In the Jain Ramayan, the Vanaras were not monkeys, but warriors who fought under a flag bearing the monkey symbol. The cave drawings in Anegundi and nearby hills depict Hanuman without a tail.

Historians say King Krishnadevaraya (1509-1529), the most illustrious king of the Vijayanagara Empire, was aware of the site’s significance as the birthplace of Hanuman. “He built many Ram temples, including Kodandarama, Hazara Rama, Pattabhirama and Malyavanta Raghunatha, to acknowledge that Ram, Lakshman and Hanuman walked on this land,” said Kolkar. “Sequences from the Ramayan were depicted on the walls of Hazara Rama temple… Dvaita philosopher Vyasaraja Teertha, the rajguru (royal priest) of King Krishnadevaraya, was aware that Anjanadri was the birthplace of Hanuman. The king built the Hanuman temple atop Anjanadri hill and also consecrated as many as 732 Hanuman temples across his empire.”

The current controversy has annoyed the Anegundi royal family, too. Krishnadevaraya, who is a direct descendant of Aliya Rama Raya, son-in-law of King Krishnadevaraya, said he had more faith in the “saints” and their testimonies of Anjanadri than the findings of the TTD panel. “While there are innumerable edicts and inscriptions identifying Anjanadri in Anegundi as the birthplace of Lord Hanuman, I will still go by what the great pontiffs have said about the place,” he said. “During my childhood, the Kanchi seer had come to our house and said he had felt the strong presence of Lord Hanuman in Anegundi.”

Said Dr Vasudev Badiger, professor of ancient history and archaeological studies in Kannada University, Hampi: “Oral tradition has helped pass on the historical significance of ancient places through generations, which is then documented in the form of manuscripts and inscriptions. The Pampa Mahatme, the legendary history of the region as narrated in the religious text Skanda Purana, mentions several names of places like Malyavantagiri, Rishya Mukha, Kishkindadri, Hemakoota, Viprakoota and Gandharvagiri, which continue to be known by the same name even now. The Kartikeya Vana mentioned in the Ramayan is some 40km from Hampi, and it was here that Rama procured powerful weapons to fight Vali.”

Anegundi had been a sleepy town for years. Then, last year, the Ram temple issue in Ayodhya was resolved, and the town in Karnataka saw renewed interest. The town, which had found mention in election speeches of Prime Minister Narendra Modi and Uttar Pradesh Chief Minister Yogi Adityanath, has seen a sudden rush of religious activity. Recently, Karnataka Governor Vajubhai Vala collected two stone slabs from Anjanadri hill to be used to rebuild a Hanuman temple in his village in Anand district, Gujarat.

The Karnataka government has big plans to develop Anjanadri Betta, on the lines of the upcoming Ram temple in Ayodhya. A planned meeting to discuss the master plan, which included MLAs and ministers, was deferred because of the rising Covid-19 numbers.

The many suggestions included a giant statue, a ropeway to help the elderly scale the hill, and commercial activities to make Anjanadri a global tourist destination. The Anjanadri temple, which the Muzrai department had taken over two years ago, currently generates an annual revenue of 015 lakh. “I am keen to be part of restoring the ancient temples of Anegundi, which are in ruins,” said Krishnadevaraya. “It is a living heritage and we must restore it structurally, without affecting its aesthetic, and revive the rituals. The masterplan needs to be carefully drafted as the region is known for its pristine environs. We need to retain the natural exuberance of the place and we need to develop it as a pilgrimage centre and not as a commercial tourist centre with unwanted concrete structures.”