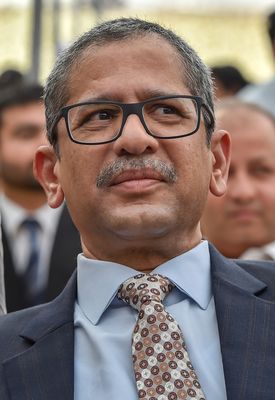 IN JUNE 1975, soon after the Emergency was imposed, a young student activist in Krishna district, Andhra Pradesh, participated in a public meeting where he spoke in favour of civil liberties. The youth’s father, afraid that his son would be arrested, asked him to leave for his maternal aunt’s house and gave him 010 for the journey. He hitched a ride on a truck for part of the way and then walked all night to reach his aunt’s home.

The student leader has come a long way and is the new chief justice of India. Justice N.V. Ramana, who recounted the anecdote at a book launch a few months ago, said he felt his father should have given him more money. On a more serious note, he said excesses like the Emergency impact generations. Ramana lost an academic year because of it, but he said he had no regrets as he had seen many youngsters sacrificing their lives to protect human rights.

As Ramana takes over as CJI on April 24, he comes with the reputation of having given the utmost importance to civil liberties and fundamental rights. This reputation is justified by his judgments. In the order lifting the internet ban that was imposed on Jammu and Kashmir in the wake of the abrogation of Article 370, he said that “access to the internet is a fundamental right by extension”.

A bench headed by Ramana also said that governments must ensure that the press was allowed to do its job freely, and that freedom of speech and expression included the right to disseminate information to as wide a section of the population as possible. In another judgment, the court held that even when a stringent law like the Unlawful Activities (Prevention) Act was applied, the accused could get bail when there was no likelihood of trial being completed within a reasonable time.

“Our expectations from Justice Ramana are so high especially because of his judgments,” said Supreme Court advocate Shobha Gupta. “It is reassuring to know that the head of the judiciary has civil liberties as his prime concern.” Members of the Bar say his judgments reflect his liberal thought; an example is his recent order stressing on fixing a “notional income” for homemakers. The case was about the non-payment of compensation to the kin of the victim of a motor accident on the grounds that she was a “housewife” and not an earning member of her family. A bench headed by Ramana said “the conception that housemakers do not ‘work’ or that they do not add economic value to the household is a problematic idea that has persisted for many years and must be overcome”. His progressive views with regard to gender equality were also evident in 2018, when a bench he headed hauled up the government for denying permanent commission to serving women officers in the Army.

Advocate Sneha Kalita—who has filed a petition before the apex court on behalf of the Supreme Court Women Lawyers Association with regard to the need to appoint more women judges in the higher courts—said Ramana’s stance towards gender justice gives hope that some work will be done towards improving representation of women in the judiciary. “We cannot expect wonders to be done overnight,” she said. “However, the kind of approach that he has towards issues of gender parity is exactly what is required at present to at least get things moving in the right direction.”

Lawyers also point out Ramana’s concern on corruption, as reflected in the orders on the need to fast-track criminal cases pending against MPs and MLAs. In the Karnataka assembly case, he said horse-trading and corrupt practices associated with defection and change of loyalty for lure of office or other “wrong reasons” have not abated. He was a part of the five-judge Constitution bench that held that the office of the chief justice of India is covered by the Right to Information Act.

Ramana, who hails from an agrarian family, dabbled in journalism—working with a Telugu newspaper—before he turned to law. He began practising as an advocate in 1983. In 2000, he was appointed a judge in the Andhra Pradesh High Court and was made acting chief justice in 2013. Later that year, he was appointed chief justice of the Delhi High Court. In 2014, he was elevated as a judge of the Supreme Court.

The judge, whose tenure is till August 2022, is known for his patience. Lawyers, especially the younger ones, do not feel intimidated in his court. He gives a patient hearing and is respectful towards lawyers.

Expectations from his elevation as CJI are high, but it must be noted that he is taking over at a difficult time. The judiciary is faced with several challenges, which include dealing with an all-time high pendency of cases (close to 4.5 crore), vacancies in judges’ positions (416 against a sanctioned strength of 1,080) and Covid-19 restrictions impairing the functioning of the judiciary. Dealing with the intra-collegium tension will be another key challenge for Ramana.

The only negative surrounding Ramana’s ascension was Andhra Pradesh Chief Minister Y.S. Jagan Mohan Reddy’s allegation against him in October 2020. In an unprecedented move, the chief minister wrote to CJI S.A. Bobde, accusing Ramana of influencing the functioning of the state’s High Court. Reddy mentioned Ramana’s alleged proximity to former chief minister N. Chandrababu Naidu and referred to a probe by the state’s anti-corruption bureau into “questionable (land) transactions” by Ramana’s two daughters in Amaravathi.

The complaint was dismissed by the Supreme Court, with a statement that it had been dealt with under the in-house procedure. The same day, Bobde recommended Ramana as his successor. It is felt in certain sections that there ought to have been greater transparency in how the matter was dealt with. But, notably, the allegations saw the judiciary closing ranks around Ramana. “There is no controversy, no baggage as Justice Ramana takes over as the new CJI,” said Pradeep Rai, senior advocate and vice president of the Supreme Court Bar Association. “It was evident why the letter was sent. The chief minister was affected by the orders with regard to fast-tracking of cases pending against MPs and MLAs.”