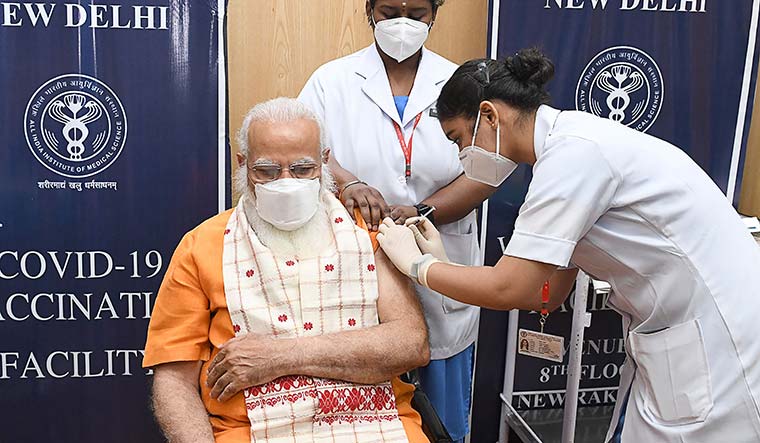 Days before the vaccination drive started in January, Prime Minister Narendra Modi praised the chief ministers, in a meeting with them, for containing the spread of the pandemic more effectively than the administrations in several other countries. Now, as the second wave ravages the country—close to three lakh cases reported in 24 hours (as on April 21)—the Centre and the states are at each other’s throats.

After Union Health Secretary Rajesh Bhushan took a dig at vaccine management by various states, Union Health Minister Dr Harsh Vardhan, on April 7, uncharacteristically, lashed out against “certain states” for their “deplorable attempts to spread panic”. After the Maharashtra government launched a scathing attack on the Centre, the health minister accused the state of letting people escape institutional quarantine and accused the Congress government in Chhattisgarh of inciting vaccine hesitancy in people.

While the crisis was managed centrally during the first wave, this time the states have pushed for local strategies. Earlier, the opposition opposed lockdown. Now, the BJP seems to be doing so; Modi asked the states to treat lockdown only as a last resort and has encouraged micro containment zones instead.

Based on the sentiment on the ground and mounting pressure from the opposition, including letters from Congress president Sonia Gandhi, Rahul Gandhi and former prime minister Manmohan Singh, the Centre took some key steps. It gave permission for all approved vaccines across the world to be allowed in India, allotted financial assistance of Rs4,500 crore to Serum Institute and Bharat Biotech to ramp up vaccine production facilities, and allowed states to procure vaccines from the open market.

Though the Centre appears to have left the states to handle vaccination, Modi made it clear that the Central government’s scheme to provide free vaccine to those above 45 will continue. He said 50 per cent of the vaccines made in India will be available to states and hospitals. However, as states and hospitals can buy from the open market, there are concerns over the pricing of doses in private hospitals. Serum Institute has announced its rates for vaccines: Rs150 (Centre), Rs400 (states) and Rs600 (private hospitals).

The states would be happy to procure vaccines and offer them for free through government hospitals. Chief ministers can then project vaccination as a state-sponsored project, unlike the drive for vaccination of those above 45, which uses Modi’s pictures and slogans. But, from where will cash-strapped states find extra funds to provide free vaccines for the 18-plus drive? Uttar Pradesh and Assam have already announced that the vaccine will be available in government hospitals for the 18-45 age group.

Congress spokesperson Jaiveer Shergill said the Centre should have prepared an arsenal to combat the second wave of the pandemic. “Instead, it used time and resources for election management,” he said. He said the decision to allow states to buy vaccines from manufacturers was “worse than the disease” in terms of financial implications. “The Centre should first clear GST dues owed to states so that they have the capital to buy,” he said. People have lost jobs, he added, and if the doses are priced at Rs400 or Rs600, they will be financially burdened. “Vaccines should have been free of cost,” he said. “The prime minister conveniently took credit when cases were low and now when the crisis is out of hand, he has passed the buck to the states.”

BJP spokesperson Gopal Krishna Agarwal conceded that there was a crisis. “No one knew it would be so severe. There were gaps. In a federal structure, we have to see the duties of the Centre and the states. The Centre has some responsibility, but states have more. It is wrong on the part of the states to blame the Centre.” He said the blame exacerbated the crisis. “Like in the case of Remdesivir, artificial demand was created,” said Agarwal. “Opposition leaders are converting it into panic. That is why people are hoarding. It is precipitating the matter further. When the vaccination drive started, the opposition leaders tried to derail it. Everyone should help in managing the crisis. Demand and supply gap should be addressed. The Centre is working hard to fulfil demand.”

The month of April has not been good for the Centre’s image as Covid-19 protocol was not followed at the Kumbh Mela and during the rallies and road shows in the states which had elections, particularly West Bengal. The BJP came up with a two-fold strategy to deal with this. Party president J.P. Nadda asked his cadre to work to create awareness at the booth level and took steps to reduce the attendance in rallies of senior leaders. In the past, the party has been successful in using its massive organisational base to engage with people and blunt any negativity. But, this time, the number of deaths and appeals for essential medicines on social media meant that it could not change the narrative. Nadda then asked the cadre to respond to calls for help.

The next few weeks will be crucial for the country. The current crisis is perhaps the biggest challenge of the NDA government’s tenure; if the pandemic continues to spread uncontrollably, whatever goodwill Modi enjoys will suffer. His global outreach through vaccines is also being put to the test by the second wave.

The state governments are perhaps guilty of slowing the pace of infrastructure development—like increasing beds and oxygen availability—and looking to the Centre for direction, despite health being a state subject.

The virus has been ideologically neutral as both BJP-ruled and non-BJP-ruled states have been wrecked by its spread. Both the Centre and the states are likely to come under intense pressure as the second wave looks set to keep rising.