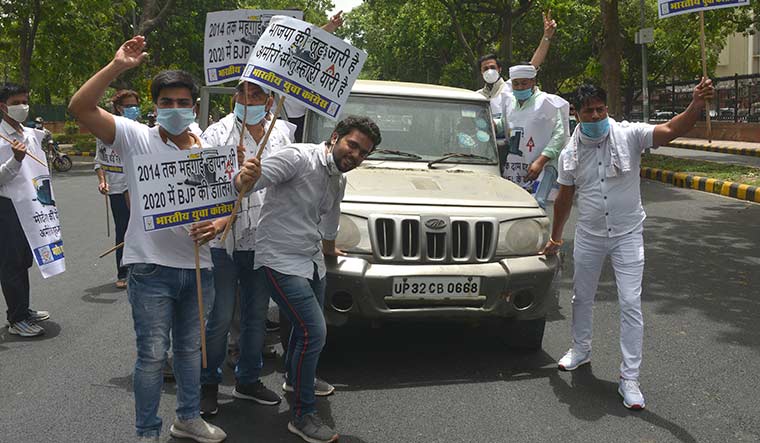 PRAKASH PITRODA RUNS a carpentry business on the outskirts of Mumbai. Though the Covid-19 pandemic hit the business hard, in the past few months it has been picking up along with the turnaround of the economy. But Pitroda has a new challenge to deal with—the rising costs of groceries. “Prices have increased a lot now and I need to spend more on the essentials. Yet, I have not been able to increase my rates proportionally because business has still not picked up in a big way,” he said.

While petrol prices touching 0100 in certain cities grabbed the headlines, the sharp spike in the prices of essentials is what people like Pitroda are more worried about. Almost everything from edible oils and soaps to consumer durables and cars has become more expensive and a fresh round of hikes is in the offing.

Soybean surged more than 12 per cent between December 2020 and February 2021, on top of the 33 per cent increase through 2020, according to CARE Ratings. Similarly, sunflower prices increased about 15 per cent and palm oil prices gained 33 per cent. Prices of raw materials like palm fatty acid distillates (PFAD) that is used in personal care products, and copra (dried coconut kernels, from which oil is obtained) have also seen double digit hikes, forcing makers of consumer goods to raise prices.

The rise in metal prices is forcing automobile companies and consumer durable manufacturers to hike prices. Copper prices are up 37 per cent and iron ore is up 70 per cent this year to hit 10-year highs. Aluminium prices have risen 16 per cent this year. Maruti Suzuki, India's largest carmaker, and Hero MotoCorp, the largest two-wheeler maker, have announced price hikes from April 1.

India saw one of the strictest lockdowns after the breakout of the pandemic last year. That led to a sharp decline in consumer demand. Production also reduced drastically as factories and mines, too, were shut. When the economy began to reopen, however, demand rebounded at a faster-than-expected pace. The sharp rebound surprised even the optimists, and factories have been unable to keep pace with demand, leading to a surge in prices.

“Nobody expected demand would move up so much,” said Kamal Nandi, president of appliances industry body CEAMA. “As demand has shot up in many countries, demand for raw materials has risen significantly. With supplies unable to keep up with demand, there is a shortage and that is leading to an increase in prices. Be it steel, copper, aluminium, plastic or chemicals, everything is going up.”

As economies reopened and people started going back to work, demand for personal mobility went up, boosting crude oil prices. Coupled with high taxes, it has led to a record rise in retail fuel prices. This, in turn, has led to transportation and logistics costs going up for companies.

Suman Chowdhury, chief analytical officer at Acuite Ratings, said that in anticipation of a recovery in global demand and supply cuts by the Organisation of Petroleum Exporting Countries, India’s crude oil basket firmed up by 8 per cent in March alone. This is in addition to the near 40 per cent increase between November 2020 to February 2021. “This is reflecting in the very sharp rise in retail fuel prices. The price increase [of essentials] we are seeing is because of the pass-through of the higher transportation cost,” said Chowdhury. Owing to the rise in diesel prices and a pick-up in demand, truck rentals have risen 10 to 12 per cent in the past few weeks.

The consumer price index (CPI) inflation rose to its highest in three months, touching 5.03 per cent in February. It was 4.06 per cent in January. Food inflation rose steeply to 3.87 per cent from 1.89 per cent in the previous month, and core inflation, excluding food and fuel, rose to around 5.8 per cent.

With commodity prices expected to remain high, industry experts say there will be more price hikes in the months to come. Nandi said the consumer durables industry had already raised prices by 6-8 per cent and they would go up a further 5-7 per cent between April and May.

Many FMCG companies have raised prices in categories like soaps and toiletries. Godrej Consumer Products Ltd, a leading manufacturer of soaps, saw a 4-5 per cent overall pricing-led growth in the December quarter and another calibrated price hike was done in the January-March quarter, said Sameer Shah, head (finance) for India and SAARC, Godrej Consumer Products.

This rise in prices across categories would have an impact on consumer sentiments, especially in discretionary spends, say economists. “As long as it is a necessity, it will not make a huge difference. For instance, you must buy toothpaste, soap and edible oil. So, there is no choice there. In discretionary goods, however, you will think twice. For instance, if refrigerator prices have gone up, I may continue using my existing refrigerator,” said Madan Sabnavis, chief economist at CARE Ratings.

Given the weak consumer sentiments, companies are reluctant to pass on the entire input cost increases in the retail price. “The strategy we have adopted is to have calibrated and judicious price hikes,” said Shah. “There is still a gap between palm oil prices and the end consumer prices. In the very short term, if there is a serious trade-off between margins and growth, we will skew more towards growth.”

The Reserve Bank is closely watching these price movements. In its monetary policy committee (MPC) meeting in February, it left the benchmark repo rate (the rate at which the RBI lends to commercial banks) unchanged for the fourth consecutive time at 4 per cent and vowed to continue with its accommodative stance as long as required to revive growth. Minutes of the meeting show the MPC members were mindful of the rising commodity prices.

“Upside risks to the outlook for inflation persist. First, core inflation remains stubborn and will warrant close monitoring as it has the potential to render the recent fortuitous improvements in the macroeconomic outlook stillborn. Second, rising international commodity prices are being watched the world over with concern as heralding the return of inflation. For India, the relentless hardening of international crude prices is worrisome, especially as their impact on inflation is amplified by disproportionately high excise duties,” said Michael Patra, deputy governor of RBI. The Central bank is expecting retail inflation at 5.2 per cent in the quarter ending March 31, 2021, and in the 5.2-5.0 per cent range in the first half of 2021-22.

With the second wave of the pandemic gaining momentum in various parts of the country, restrictions and lockdowns have been reimposed in several cities. This could have an impact on consumption and put the brakes on the economy. In such a situation, it is going to be a tough balancing act for the common man.