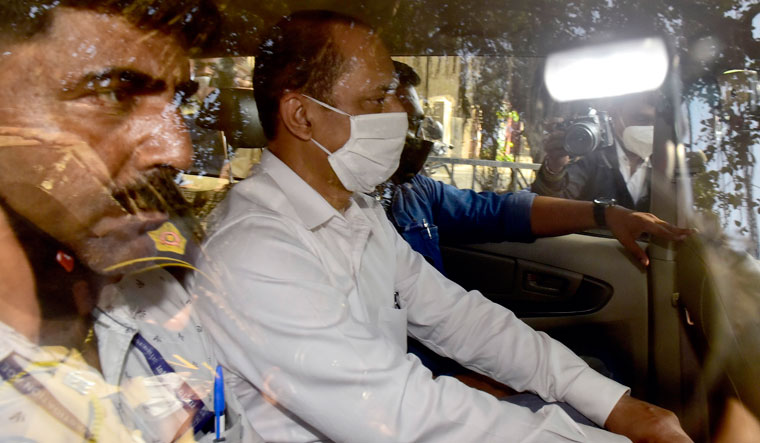 In the dock: Sachin Vaze being taken to the NIA court in Mumbai | Getty Images

A Mahindra Scorpio laden with explosives found 500m away from the house of India’s richest man; the sudden death of the owner of the vehicle, who had reported it stolen; the arrest of a police officer; and a letter by a police commissioner accusing the home minister of corruption. The recent developments in Maharashtra have all the ingredients of a riveting crime thriller. The dramatis personae are the high and the mighty of politics and police. And it tells the story of the pathetic state of law and order in the state.

The can of worms in Mumbai and Maharashtra police was opened by the mysterious death of Mansukh Hiren, the owner of the Scorpio which was found outside Antilia, the residence of Reliance Industries chairman Mukesh Ambani in south Mumbai, on February 25. Twenty gelatin sticks weighing a total of 2.6kg were found in the vehicle.

It was the Crime Branch that traced the Scorpio to Hiren, a Thane-based auto spare parts businessman. He told them that the vehicle was stolen on February 17, after it broke down while he was headed to Mumbai; he had registered a complaint at the Vikhroli police station on February 18.

On March 4, Hiren had written to Maharashtra Chief Minister Uddhav Thackeray and the police commissioners of Mumbai and Thane complaining that the investigating agencies were harassing him.

On March 5, Hiren’s body was found in Thane creek at Retibunder, Mumbra. There was a mask around his neck and he was gagged with cloth.

Surprisingly, when opposition leader Devendra Fadnavis raised Hiren’s death and questioned the government’s failure to protect him during a discussion in the assembly on March 5, Home Minister Anil Deshmukh, who had not been informed about the developments by his officials, was caught unawares. Unable to explain the lapse, the government handed over the probe to the Anti-Terrorism Squad, which was probing the Scorpio bomb scare. While the police had dubbed Hiren’s death as suicide, the ATS registered a case of murder and criminal conspiracy on March 7.

Fadnavis alleged that assistant inspector Sachin Vaze, who was close to the ruling dispensation, was the first to reach the Scorpio, even before the team from the nearby Gamdevi police station. He said Vaze knew Hiren as there was evidence of a phone conversation between them in 2020. An encounter specialist, Vaze was suspended in connection with the custodial death of Khwaja Yunus, an accused in the 2002 Ghatkopar bomb blast case. He quit the service in 2008 and joined the Shiv Sena, but the Thackeray government reinstated him last year citing Covid exigencies.

On March 9, Fadnavis, while speaking in the assembly, read out details from the statement of Hiren’s widow, Vimla. According to Fadnavis, the statement said Vaze was Hiren’s customer and the Scorpio was in the inspector’s possession from November 2020 to February 5, 2021. The statement also said Hiren had told his wife that Vaze had asked him to get arrested and he would ensure his bail in two or three days. On March 2, Hiren told his wife that Vaze had advised him to write to the chief minister, the home minister and the police commissioners of Mumbai and Thane that he was being harassed by the police and the media. “Considering all this, I feel that my husband has been murdered and I suspect that Sachin Vaze is responsible for it,” said Vimla in her statement. 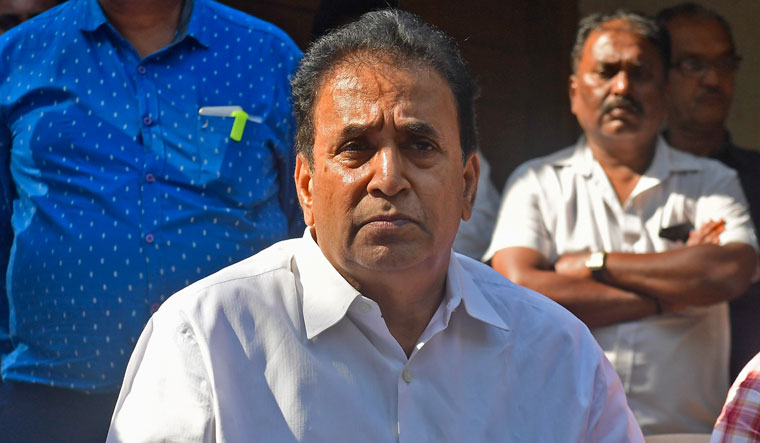 The government had been defending Vaze all this while. Deshmukh said Fadnavis was targeting Vaze because he had arrested television news anchor Arnab Goswami in the Anvay Naik suicide case. The defence collapsed when the National Investigation Agency arrested Vaze in connection with the Scorpio bomb scare case on March 13. On March 17, the government transferred Mumbai police commissioner Param Bir Singh as director general of Maharashtra Home Guards and appointed Hemant Nagrale the new commissioner.

Meanwhile, the ATS arrested Vinayak Shinde, a cop in suspension, and Naresh Gor, a bookie, in connection with the Hiren murder. Shinde was serving a life term in the Lakhan Bhaiya encounter case and had been out on parole since June 2020.

In an interview after Param Bir Singh’s transfer, Deshmukh attributed it to serious lapses in the investigation of the Scorpio bomb scare and the Hiren murder case. “The lapses were not acceptable. Therefore, the chief minister and I decided to shift him immediately for an impartial probe,” he said at an event of the Lokmat media group.

Incensed by these remarks, Param Bir Singh dashed off a letter to Thackeray and Governor B.S. Koshyari, accusing Deshmukh of corruption and interference. He alleged that Deshmukh had repeatedly instructed Vaze to collect money from bars, restaurants and other establishments in Mumbai.

The letter triggered an earthquake in the political establishment. Deshmukh issued a statement denying the allegations. “The allegations are part of a conspiracy to save himself and malign me and the MVA government. Why was Singh silent even after Vaze’s arrest for so many days? It was only on March 16, when he realised that he would be transferred, he deliberately asked a few questions to ACP Patil and conveniently got expected answers,” he said on March 20.

In a media briefing in Delhi the following day, NCP chief Sharad Pawar said that the allegations were serious and a reputed retired IPS officer should conduct an inquiry. However, at a meeting of senior NCP leaders at Pawar’s residence in Delhi, everyone questioned the timing of Singh’s letter and urged Pawar to back Deshmukh. Pawar was told that Deshmukh had tested positive for Covid-19 and had been hospitalised in Nagpur in the first half of February and was in quarantine till February 27.

On March 22, Pawar made an U-turn from his ‘allegations are serious’ remark and backed Deshmukh. He said that a decision on Deshmukh would be taken by Thackeray, hinting that the NCP was in no mood to sack Deshmukh.

The BJP rushed to puncture Pawar’s claim that Deshmukh was in quarantine by releasing a video clip of the minister speaking to the media on February 15. “Deshmukh flew to Mumbai in a private jet on February 15. According to police records of VIP movements, Deshmukh was at Sahyadri guest house in Mumbai on February 17 from 3pm onwards, and then on February 24, he travelled from his residence to Mantralaya and back,” said Fadnavis.

Minister Nawab Malik, however, rejected Fadnavis’s claims and said that Pawar had never said that Deshmukh was in quarantine in Nagpur. “Deshmukh was in Mumbai from February 15 onwards after he returned from Nagpur in a private jet,” he said. “When he was discharged from the hospital in Nagpur, reporters were waiting outside and he spoke to them sitting on a chair. That was not a press conference. Also, he hasn’t been to Sahyadri guest house or Mantralaya during his home quarantine period. All he did was exercising in the garden of his residence at night,” he said.

The drama is unlikely to end anytime soon. In its response to Param Bir Singh’s petition demanding a CBI probe into his allegations, the Supreme Court asked his counsel to approach Bombay High Court.

Thackeray’s last statement on the issue was on March 11: “Sachin Vaze is not Osama Bin Laden. It is not right to target a person, hang him and then investigate.” He has said nothing since.

The question is, will he show the courage to defy Pawar and show Deshmukh the door or be content with cosmetic changes like changing his portfolio?