We are helping the CBI burst the cattle smuggling racket 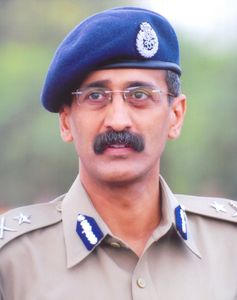 Cattle smuggling is a burning issue in this election. Why is so much smuggling happening?

It is happening. No point in denying it. But I must tell you that the number has gone down drastically in the past one year.

What is the situation in Bengal?

There could be underreporting.

I do not deny that. But there cannot be such a drastic change without massive success. You need to give credit to our boys. Only a small percentage of such cases goes underreported.

Is the change because the CBI is cracking down on it?

The Indian government has decided to control it and the BSF is a professional force that has helped the CBI in a big way.

Some senior BSF officials were caught.

That is why I cracked the whip on the errant people after I joined [in 2019]. I have given names of 15 BSF officials to the CBI. We have already taken disciplinary action against half a dozen people. I would never allow the good names of the officers and jawans to be sullied by a few corrupt people.

Have you taken any long-term decisions to stop the menace?

The border is porous and many areas have water bodies crossing the international border. So, when I personally investigated, I found that [the smuggling] increases during the monsoon. It is easier to put cattle in the water; they would swim across. We have scientifically analysed the data and have come to some conclusions.

Is the Bangladesh border force helping you?

They are serious about drug smuggling. They are probably not too concerned about cattle smuggling.

Cattle smuggling is an issue everywhere. Why is the BSF so concerned about Bengal?

It is severe in Bengal. Statistics would tell you. I am addressing the problem in the entire eastern region, wherever the BSF is posted.

There has been talk of officially accepting trade across the Bangladesh border like it happens on the Myanmar border. That can reduce smuggling.

Such markets are already functioning in Tripura. In Bengal also, the option is open. I think the foreign ministries of both countries could sit together and evaluate this. The BSF can then be engaged.

Senior Bengal ministers have claimed that the BSF is campaigning for a particular party in border areas.

I think the Election Commission has taken up the matter. I want them to furnish details. Give us the names of those who are doing it. Mere blaming would not work; evidence is required.