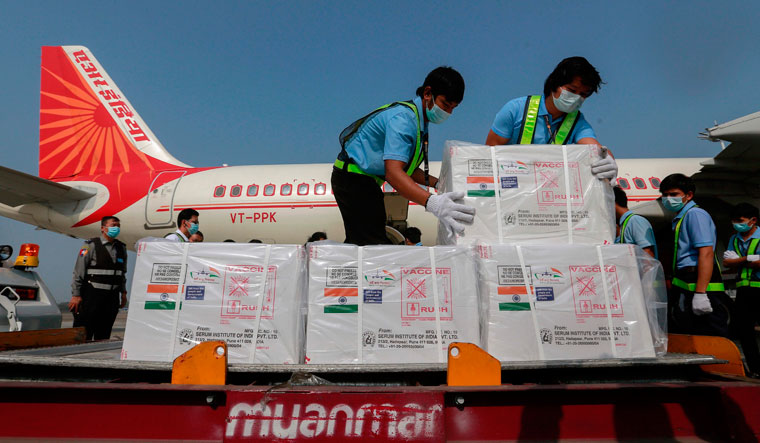 Hector Cueva Jacome was one of the 60 diplomats who went to Hyderabad on a ministry of external affairs (MEA) excursion to see India’s vaccine production facilities last December. Jacome, the ambassador of Ecuador to India, and his wife, Toya Cardenas, then signed up to participate in the clinical trials of Covaxin, India’s first indigenous vaccine for Covid-19, by Bharat Biotech. The couple took the jab earlier in January and are now waiting for their second shot on February 2.

“We are fine. No [adverse] reactions, no side effects,” he says. Jacome’s participation in the trial goes a long way in removing apprehensions around the safety of the vaccine. “It was not a decision I took on the spur of the moment,” says Jacome. “I have been in India for eight years. More than a diplomat, I am a man of science. I trust India when it comes to medicines and vaccines.”

Ecuador may be a small country in South America with a population of just 1.74 crore, a mere fraction of New Delhi’s. However, Jacome’s assertion of faith in India’s pharma sector is a welcome one for South Block’s new diplomatic outreach, Vaccine Maitri. Brazilian President Jair Bolsonaro’s “thank you” to India, in which he depicted Lord Hanuman flying over the seas, carrying the new sanjeevani—the vaccine—was another eyeball-grabbing endorsement aimed at, and will be noticed by, global audiences. It also ironed out creases caused by Brazil seeking the vaccine before India was ready to sell.

Over the last few days, India has been sending Covishield vaccine to its neighbours, a much-welcome gift in these times, and stealing a diplomatic march over the bigger player in the neighbourhood, China. Ten lakh doses to Nepal, shortly after the country’s Foreign Minister Pradeep Gyawali’s visit to New Delhi goes a long way in healing the rupture in India-Nepal ties. Similarly, in Bangladesh, a 20 lakh-dose gift was a warm gesture following on the summit between Indian Prime Minister Narendra Modi and Bangladesh Prime Minister Sheikh Hasina. Subsequently, Bangladesh has placed an order of three crore doses directly from Serum Institute of India. In Bhutan, Maldives, Mauritius and Seychelles, too, the gifts from India set rolling their mass inoculation programmes. Sources say that central Asian, African and Latin American nations, too, may get vaccine aid in the days to come.

Vaccine Maitri ticks many boxes in India’s international position, like ‘neighbourhood-first’ cooperative multilateralism and South-South cooperation. Earlier, India did the same with its drug diplomacy, dispatching the pills in vogue at various stages of the pandemic. China, while being the leading supplier of active pharmaceutical ingredients, does not have the same reputation with drugs and vaccines. India, on the other hand, is on solid ground here. Prime Minister Modi had, way back in last April’s extraordinary G-20 virtual summit, made a case for freeing Covid-19 drugs and medicines from intellectual property rights, making the research more accessible to people through the generic market. His proposal, however, did not get much support from the west, for obvious reasons.

In a world where access to vaccines has always been skewed, the disparity is stark now. The developed west is sitting with a cache of expensive vials, loath to share with others, while many poorer nations are scrambling to get access to any number of doses they can get. China made the first move with its Sinovac, as did Russia with Sputnik, giving approvals before efficacy was established, but have not notched a diplomatic score yet. Trust is vital, and here it is Pune and Hyderabad that have the trust.

Brazil’s first experiment with the Chinese vaccine was not a savoury one, and, even though Sinovac is the main vaccine in the country’s immunisation programme, they are now using locally-produced doses, not Beijing-imports. Beijing has reportedly agreed to donate 10 lakh doses to Cambodia, too. The catch is that it wants Cambodia to order more, from the funds donated by China. India, on the other hand, always maintains that its aid comes free of any clauses and baggage. Though India’s aid comes with no clauses, a Sri Lankan daily, The Island, had raised the question whether the vaccine push is also a push towards consolidating the Colombo Port Trust project and other items on India’s Sri Lanka agenda. 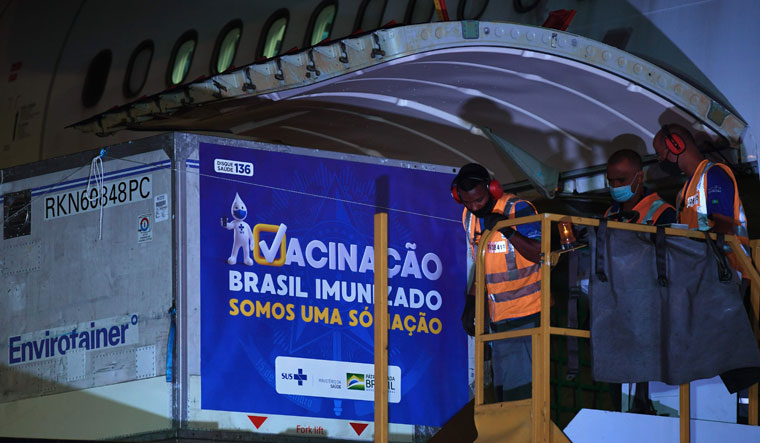 “India’s position as ‘vaccinator of the world’ was established much before the pandemic,” says Oommen C. Kurian, who leads the health initiative at the Observer Research Foundation. “Vaccine Maitri is a well-thought-of move, where India is packaging its established capacity with smart realpolitik.” Vaccines have just started rolling out. It will take months, even a couple of years, for the world to inoculate itself against Covid-19. These gifts, therefore, are a sneak-peak into what is coming soon, he says.

COVAX, the global initiative by Gavi, the Coalition for Epidemic Preparedness Innovations and WHO to take vaccines to the have-not nations, depends largely on India’s production capabilities. According to MEA, India is producing two vaccines now, Covishield and Covaxin; four others are in the active clinical trial phases and 15 other candidates in the pre-clinical trial phases. Sputnik, the Johnson & Johnson single-dose shot, as well as nasal doses, all will have a huge Made in India supply. MEA spokesperson Anurag Srivastava says the government has carefully calibrated domestic demand, for its phase-wise immunisation rollout, before sending out the vaccines.

The Vaccine Maitri hoopla—tweets, videos and photos of grateful recipient nations—may boost the government’s international image within India. The diplomatic gains may or may not last, however, there is nothing to lose from the Vaccine Maitri push, either. It does not make a huge dent in the budget to give away a few free doses. But in the final analysis, historically, when there is a comparison of the two Asian giants, it will always be remembered that while the virus emerged from the lab or market of one, its nemesis came from the other one’s laboratories.