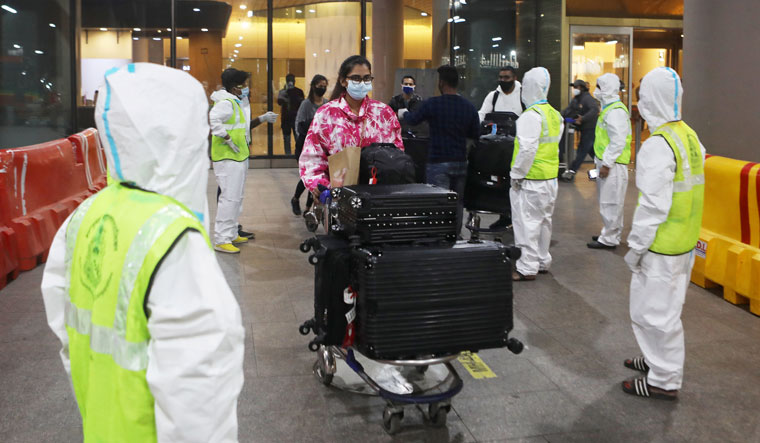 The Covid-19 story had begun to appear hopeful with early approval for at least two vaccines and over 4.4 million doses administered already. But on December 14, scientists in the UK sounded the alarm once again. SARS-CoV-2, they said, had acquired several mutations, giving it the ability to spread faster. First spotted in September, mutations in SARS-CoV-2 were seen in two-thirds of the cases in London by mid-December. Since then, many countries reported the presence of the new variant, indicating its rapid spread. On December 29, India joined the list—of the 114 UK returnees who tested positive, six had the new variant.

The new strain has 17 mutations that are significant, to the extent that they have rendered the virus more contagious (by up to 70 per cent), reports from the UK suggest. No effect on the severity of disease, change in symptoms or mortality has been found, yet. But scientists say that early studies show it is better at entering human cells and infecting them. “Three main mutations are important. The N501Y mutation seems to be responsible for the efficient binding of the receptor-binding domain of SARS-CoV2 spike protein with the ACE2 receptor,” said Dr Sunit Singh, professor, Banaras Hindu University. The ACE2 receptor is a protein on the surface of many cell types and provides the gateway for SARS-CoV2 to infect the cell.

“The second mutation (amino acid deletions) might be responsible for helping the virus evade the human immune system,” said Singh. “The third mutation, P681H, might be helpful in the cellular entry of this virus after infection.”

Viruses mutate all the time, said Singh. The flu virus changes often and demands a tweaked vaccine for protection almost every year. “The degree of mutations may differ,” he said. “Each virus is different. For the most part, mutations are deleterious for any virus. Under exceptional circumstances, though, they may help the virus in adapting better in causing infection.”

A growing concern is the potential impact of the mutations on the vaccines, given that the changes have occurred in the virus’s spike protein area, an area most vaccines are targeting. But some experts feel otherwise. “The SARS-CoV-2 spike is a big protein,” said Dr Nimesh Gupta, head, vaccine immunology laboratory, National Institute of Immunology. “The new variant may escape few antibodies that are made against the ‘old unmutated parts’ of the virus, but it cannot escape the large number of antibodies targeting different parts of the virus spike protein. So, any such variant with few mutations is not alarming for the ongoing vaccines.”

Despite the reassurances, experts concede that an evolving virus, which is trying hard to evade the body’s immune system, remains a matter of concern. In India, it has brought to fore the need to enhance genomic surveillance; the logic being if you look hard enough, you may find something. “But we have not even been looking,” said Dr Rakesh Mishra, director, Centre for Cellular and Molecular Biology, Hyderabad. Sequencing a proportionate number of positive samples is part of a routine surveillance strategy. According to the WHO, between 5 to 10 per cent of all SARS-CoV-2 viruses have routinely been sequenced in the UK. In India, 0.05 per cent of samples were being sequenced until now, which is low, said Mishra.

“We have the second largest number of infections in the world,” said Mishra. “There is a chance that the virus might be undergoing changes here as well. Doing whole-genome sequencing (WGS) as part of routine surveillance helps plan better. It can help us catch any significant mutation early, and design our containment strategies better.” The importance of doing WGS can also be understood from the fact that the mutation acquired by the new variant has also helped it trick diagnostics. “Tracking any new mutation early is absolutely crucial so that the diagnostics can also catch up,” said Mishra.

On its part, the government seems to have finally “woken up”. Last week, members of the National Task Force for Covid decided that routine genomic surveillance of SARS-CoV-2 from representative samples is essential. A plan to conduct WGS for five per cent of Covid-positive samples was agreed upon.

A genomic surveillance consortium under the National Centre for Disease Control, New Delhi, too has been proposed. The exercise will help understand the spread of the virus and in locating any changes to the genetic code. Generating data from genomic surveillance can be immensely useful. For instance, it can be used to identify super-spreader events, outbreaks and trends in mortality.

The new variant has also sparked a debate on the role of immunocompromised patients. “In the current scenario, it seems like the evolution of this virus happens within the immunocompromised hosts during an extended period of infection,” said Gupta. “It seems that the virus has got an opportunity to make it a ‘better fit’ while staying in the body for a long time without any resistance from the already compromised immune system. This may happen in any part of the world.”

As far as the new variant’s impact on patients goes, Gupta feels that there might be hope for Indians. “If we are able to control the virus in the early phase, either by some cross-reactive protection or by having a well-synchronised immune response, we will have an advantageous outcome,” he said. Strong traits of both the cross-reactive and SARS-CoV-2 specific protective immunity in Indian patients have been seen, Gupta said. “Most of us with a competent immune system should be able to mount strong immune responses to any such variant,” he added.

But Gupta cautions that with this variant there will be higher chances of the virus spreading to the vulnerable population. “So, until we start with the vaccination, any variant with higher transmissibility is indeed a major concern,” he said. “Vaccines may come, but [precautionary] measures still remain crucial to containing the pandemic,” said Mishra. Despite an evolving foe, the fight can still be won.