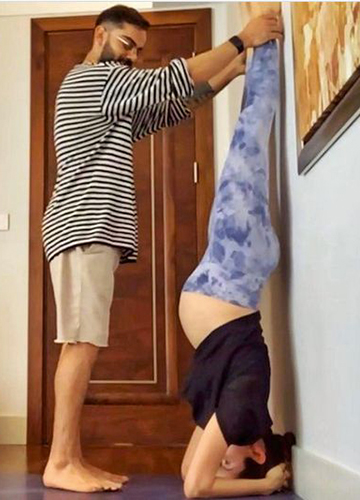 Is it worth it?: Actor Anushka Sharma performing shirshasana, as her husband and cricketer Virat Kohli holds her for support.

Recently, actor Anushka Sharma, who is now in the third trimester of pregnancy, posted a throwback picture on Instagram, in which she is seen performing shirshasana, or a headstand. Even though the post had all necessary disclaimers in place, it was anything but convincing to see a pregnant Anushka, who has less than a month to go for her due date, pulling off a headstand (albeit with support from her husband, Virat Kohli). This, when most expecting mothers decide to stay away from anything that would involve risk of injuries.

“I was astonished,” said Dr Ranjana Sharma, a consultant gynaecologist in Apollo Hospitals, Delhi, “She is almost full term now. Why take such a huge risk, especially at a time when the body’s balance is compromised? One needs to know one’s limitations as an expecting mother.”

It was not the first time Anushka tried the headstand. As she claimed in her post, shirshasana has been a part of her yoga routine for years, and her doctor recommended that she “do all the asanas she had been doing pre-pregnancy, barring twists and extreme forward bends.” Which is why when the couple was having a routine practice session at their home in Dubai, with Sharma’s long time yoga teacher, Eefa Shroff, on a Zoom call, Eefa promptly captured “their moment together”, without giving it a second thought.

Said Eefa to THE WEEK, “The picture was actually taken to capture and showcase the couple’s extraordinary chemistry and the perfect alignment that looked so beautiful with the two of them at the opposite ends of gravity. The headstand has always been a part of Anushka’s normal workout routine. She has done it several times, and there was nothing extraordinary about it, except that she pulled it off so well with a weight over five kilos as an expecting mother.”

Anushka’s undeterred passion for fitness has sparked off a heated debate among her fans, yoga experts, doctors, fitness gurus, and, most importantly, expecting moms. They argue that even if the inversion is indeed helpful or even beneficial for the physiology of an expecting mother, is it worth taking the risk?

Swati Singh, 35, is in the third trimester of her pregnancy, and due early next year. But, unlike Anushka, Swati is treading cautiously when it comes to practicing her asanas. “I was shocked at first, but then it was also inspiring to see Anushka pull it off so brilliantly,” she said, “I don’t think I have half the fitness she has to take this big a risk.” 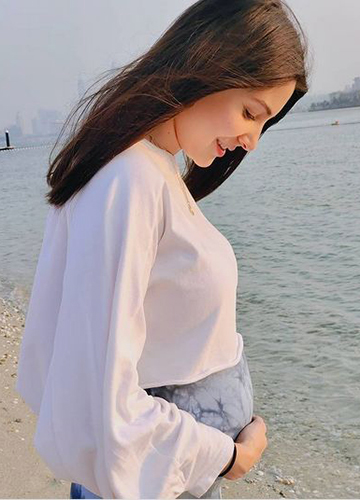 Swati attended a yoga camp in Ghaziabad in the fifth month of her pregnancy, and recalls being asked to “strictly avoid shirshasana as it falls under the high-risk category of asanas for pregnant women” and, instead, was encouraged to practise numerous other poses that “provide more benefits and are least risky”.

Even as prenatal yoga as a wellness exercise for expectant mothers—that encourages stretching, relaxation and focused breathing while reducing anxiety and stress—has been hailed by one and all across the board, yoga experts such as Hrishi Yogendra contest an “over-cautious approach.”

Said Hrishi, “In pregnancy, doing any inversion is never a challenge. It is because of the fear of injuries that most people avoid it. But, doing an inversion is actually good for the overall physiological health of an expecting mother. Even if she [Anushka] does an inversion just a day prior to the delivery, it is perfectly fine.”

Namita Piparaiya, yoga and ayurveda lifestyle specialist, said doing a headstand during pregnancy has more risks than benefits.... “It is okay if headstand does not feature in your list of yoga asanas to do during pregnancy,” she said.

What makes shirshasana so pertinent for an expecting mother is its impact on the body’s lymphatic system, which plays a key role in removing wastes and toxins and in maintaining immunity against pathogens. Said Hrishi, “Yoga works to increase the flow of lymph and relieve lymphatic congestion through inversions, which reverse the effect of gravity and drain lymph and used blood from the legs and stimulates the flow of lymph up through the core of the body. Also, it helps in pulling blood back to the heart, at a time when too much blood is going down to the limbs. This way the circulation improves, the nervous system calms down and the entire body is in complete relaxed mode.” He said one has to practise the headstand regularly even before pregnancy, so as to be comfortable doing it and avoiding injuries. “You cannot possibly start off experimenting a headstand for the first time in your pregnancy because there is no doubt that the risk of injury is extremely high in a headstand,” said Hrishi. 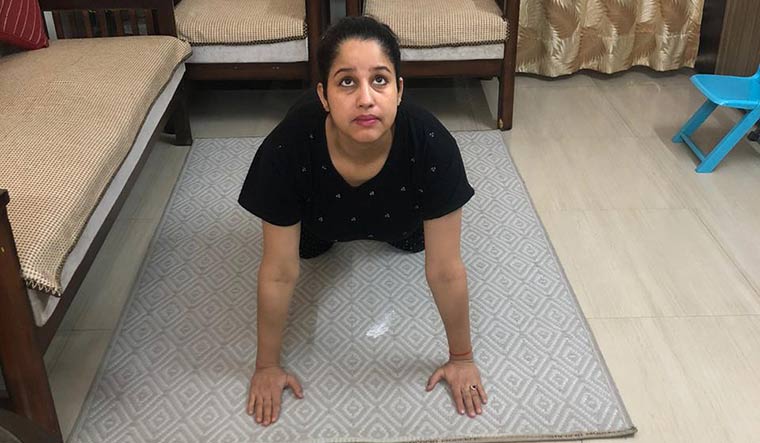 Hope and positivity: Swati Singh, in the third trimester of her pregnancy, is treading cautiously when it comes to practicing her asanas.

Interestingly, getting into an inversion is one thing and holding onto it is quite another. And, that is where one’s mental strength comes into play. Said Eefa, “One has to train the mind or the psyche to be able to sustain shirshasana for a longer period of time and Anushka has oodles of both, mental and physical strength. She does headstands at least once a week and stays put in the position for about a minute. Through all of her second trimester, we have worked on strengthening her shoulders and back. But she’s always been in the best of health. Now in the last trimester, we are doing tons of hip-openers including janu shirsasana and upavistha konasana.” Eefa has been training Anushka for over six years and has been into yoga for the last 20 years.

“But the question still remains, why do it unless it is a matter of life and death? asked Sharma, “One of the biggest risks of an inversion caused in a pregnant woman is the looming risk of the baby turning upside down inside the womb. What does one do then? Additionally, because of a change in hormones during pregnancy, the joints and ligaments in the body are loose and more vulnerable to disbalance. In addition, in an inversion, the placenta, uterus and the baby are together, adding so much more weight on the woman’s diaphragm, which is very risky.” Her voice finds an echo in Dr Rajeshwari Pawar, a gynaecologist from Pune’s Motherhood Hospital. “It makes sense only for those who have done that. This is not a good time to experiment,” she said. Natural elasticity: Samita sethi took to a number of asanas during her trimesters in order to overcome inactivity, lethargy and mood swings.

Goa-based Samita Sethi, mother to a nine-month-old daughter, took to a number of other asanas during her trimesters in order to overcome the inactivity, lethargy and mood swings that are usually associated with pregnancy. She did the sarvangasana, which comes very close to shirshasana, and is a safer alternative to it, offering the same benefits and minimal chances of injury. Sethi also regularly practiced a lot of asanas for pelvic opening or hip-opening to create space for the baby to come out easily including bhadrasana or the auspicious pose, the paryankasana, malasana and veer bhadrasana, or the warrior pose, which is ideal for pregnant women during the first and second trimesters to help build leg strength in order to support the growing baby. However, during the third trimester, the pose is likely to become more challenging.

Said Sethi, “I also took up leg strengthening postures as well as asanas such as ushtrasana, which can help in relieving back pain that is very common during pregnancy due to increased weight, specifically on the belly region.”

Experts concur that a pregnant lady can do all kids of asanas, and that only forward bending asanas, extreme back bends, side bends or twists of any kind have to be avoided. Hip-openers do help a lot. “But we advise women to really start exercising much before pregnancy and continue thereafter so that they have a smooth journey. Exercising or yoga is not limited to a particular circumstance in life, it needs to be an on-going routine. When expecting one need perform only those asanas which help in the smooth growth and delivery of the baby,” said Pawar.