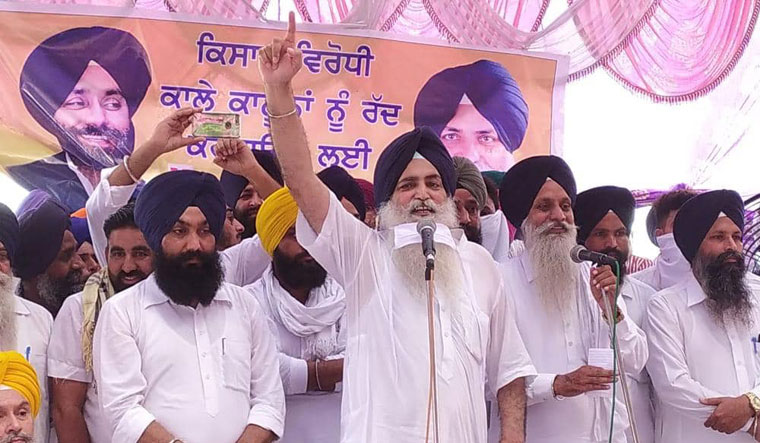 Virsa Singh Valtoha is a polarising figure in Punjab politics. A two-time MLA, Valtoha, 57, is known as much for his alleged role in Sikh militancy in the heyday of the separatist movement as for the provocative statements he has made after entering the political mainstream. A leader of the Shiromani Akali Dal, he now holds the dubious distinction of being an accused in the oldest pending criminal case against a lawmaker.

Valtoha’s claim to notoriety was discovered during the hearing of a public interest petition in the Supreme Court on September 9. A bench headed by Justice N.V. Ramana wanted to know the oldest pending criminal case against a lawmaker. The amicus curiae in the case, lawyer Vijay Hansaria, said it was a 1983 murder case in Punjab in which Valtoha was an accused. The judges were shocked; the proceedings in the case had been hanging fire for nearly four decades.

The case relates to the murder of a doctor in Tarn Taran district. The first information report was filed in September 1983, and trespass and murder charges were framed this January 17. In the meantime, Valtoha got bail in 1991 and was twice elected MLA—in 2007 and 2012.

The court has asked the state government’s counsel to apprise it of the status of the matter, even as Valtoha says he had been discharged in the case. “I was falsely implicated,”he said. “I was in jail from 1984 to 1991 in connection with other cases, so the question of my not participating in the trial in this case does not arise. The co-accused in the case got acquitted. Some months later, I got bail and was discharged from the case.”

Valtoha was arrested in Operation Blue Star in 1984. He alleged that the murder case was being revived for political reasons. “My opponents are targeting me,” he said. “There are many people who cannot bear to see me in mainstream politics.”

Valtoha may or may not be guilty, but his case is a prime example of the huge pendency of criminal cases involving incumbent and former legislators. They continue to contest elections and enter legislative bodies, even as cases involving them are stuck in courts.

According to a report submitted by Hansaria to the Supreme Court, 4,442 cases are pending against sitting and former MPs and MLAs. In 2,556 of these, incumbent legislators are accused. In as many as 413 cases, the offences are punishable by life imprisonment; 174 of these cases are against sitting MPs and MLAs. In a large number of cases, charges have not yet been framed, and many are still at the appearance stage. In many of the cases, the matter is stuck at the “execution required of arrest warrant” stage. During the hearing in which the Supreme Court bench learnt of Valtoha’s case, a case from West Bengal was also mentioned. It involved charges far less serious, but it predated the Punjab case by two years. The charges against veteran Trinamool Congress leader Sisir Adhikari included rioting, being armed with a deadly weapon, unlawful assembly and endangering life or personal safety of others, and the FIR was filed in 1981. The case was disposed of a few months ago. 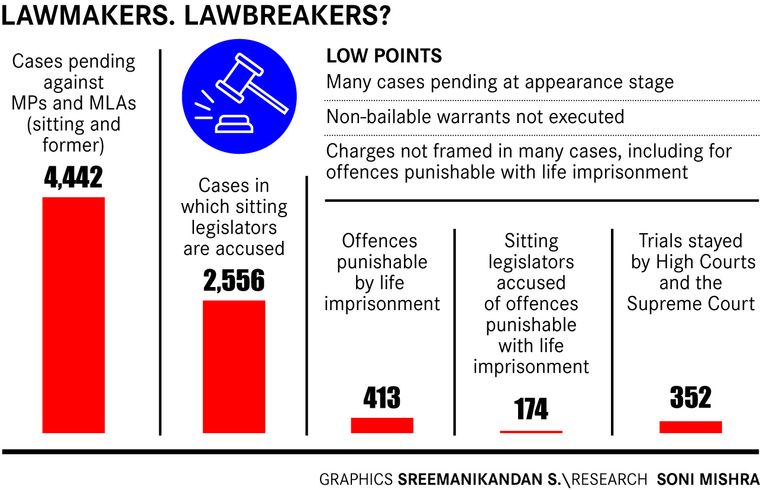 “Of course, I would have liked the case to get over earlier,” said Adhikari, 79, a former Union minister who has been a Lok Sabha member since 2009. “I mentioned the case in my election affidavits. We know how overburdened our courts are. So I do not want to blame anyone for the time it took for the case to be disposed of. It was only after the court gave an order for the cases to be tried by special courts that the trial gathered pace.”

A conviction in the case would not have resulted in Adhikari’s disqualification, since the punishment would have been less than two years in jail. But the case does serve as an example of criminal proceedings against lawmakers moving at a snail’s pace. According to the amicus curiae, the reasons for prolonged pendency include the accused trying to influence witnesses by using money and muscle power. He said the court should direct the authorities to strictly implement witness protection measures.

In many cases, non-bailable warrants issued by the trial court for securing the presence of the accused were not executed. “There are serious issues involved in establishing evidence in these cases,”said advocate Sneha Kalita, who helped Hansaria prepare the report. “The accused do not appear before the court. Witnesses either do not turn up or turn hostile. So the case goes into a standstill at the evidence stage.”

She also pointed out that there were not enough special courts to hear the cases. There are now 12 such courts, but the Supreme Court wants the Centre to consider increasing this number based on the district-wise breakup of pending cases. “There is also the issue of the investigating officer and the witnesses having to travel long distances to attend trial in the special courts. If more such courts are set up, this problem can be resolved,” she said.

The amicus curiae has suggested setting up special courts in every district, giving priority to cases depending on the severity of the crime and punishment involved, reviewing the stay on a large number of cases, providing protection to witnesses, and asking the High Courts to monitor the progress in the cases. A larger issue arising out of this is the criminalisation of politics. What began as a criminal-politician nexus, say experts, has led to the criminal coming to the fore and fighting elections, with dons-turned-politicians like Mukhtar Ansari and Ateeq Ahmed completing the mainstreaming of crime in politics. Nearly half of the winners of the Lok Sabha elections in 2019 had criminal cases against them, according to a study conducted by the Association for Democratic Reforms. Of the 539 MPs elected in May 2019, 233 or 43 per cent were named in criminal cases. As many as 112 MPs (21 per cent) were accused of serious crimes. Maj Gen (retd) Anil Verma, head of ADR, said the Supreme Court should not leave it to Parliament to enact laws to clean up politics. “They (parliamentarians) will be the last people to do something about it, considering the large number of lawmakers who face criminal charges, and the prevalence of money and muscle power in elections,” he said. 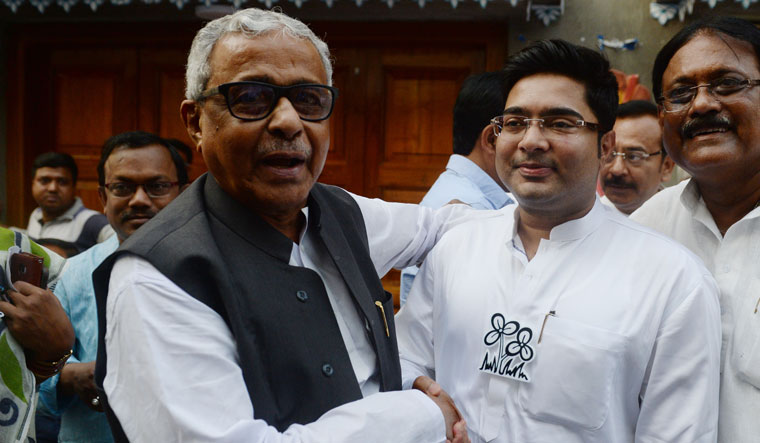 Relief, at last: Trinamool Congress leader Sisir Adhikari (left) with fellow MP Abhishek Banerjee. Adhikari was named in a case of rioting and unlawful assembly. The FIR was filed in 1981, and the case was disposed of a few months ago | Salil Bera

The oft-stated defence of politicians is that most such cases are politically motivated and that they should not be deprived of the ‘innocent till proved guilty’ principle. “Getting named in cases is an occupational hazard,” said Adhikari. “You take part in an agitation, and you risk being named in a case.”

In February this year, the Supreme Court directed political parties to publish the criminal history of their poll candidates along with the reason for giving tickets to the accused. The order will be implemented for the first time in the assembly elections in Bihar, due later this month. The Supreme Court has, meanwhile, refused to pass an order to debar politicians facing criminal charges from contesting polls. It had ruled in 2013 that a legislator convicted of a crime and given a minimum punishment of two years in jail would lose his or her membership of the house immediately. Lalu Prasad of the Rashtriya Janata Dal and Rasheed Masood of the Congress lost their seats in Parliament because of the order. The existing law states that convicted politicians cannot contest elections for six years after completing their sentence. There have been demands for barring politicians facing criminal charges from contesting polls, and banning convicted politicians from fighting elections.

According to former chief election commissioner S.Y. Quraishi, such a ban would be unduly harsh. He said the current minimum ban of eight years—two years of minimum imprisonment, followed by a six-year ban—is enough to kill a political career. A way out, according to him, has three options. “One, political parties should themselves refuse tickets to the tainted,” he said. “Two, the Representation of the People Act should be amended to debar persons against whom cases of heinous nature are pending. Three, fast-track courts should decide the cases of tainted legislators quickly.”