Farmers’ organisations are on the warpath against new reforms 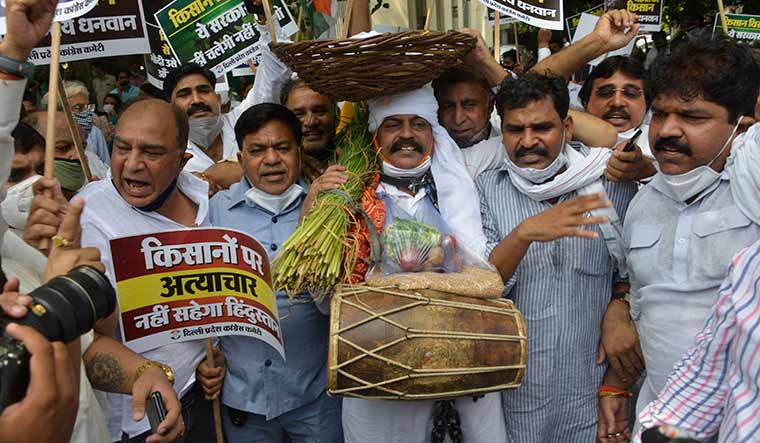 Grapes of wrath: Congress workers during a protest in Delhi | Arvind Jain

What happened in the Rajya Sabha on September 20 was unprecedented and against constitutional propriety. Both the government and the opposition agree on this, but for different reasons.

The trouble started when Deputy Chairman Harivansh asked for proceedings to be extended to pass two crucial agriculture reform bills. The opposition resisted. As Harivansh persisted, agitated members of the Congress, the Trinamool Congress and the Aam Aadmi Party rushed to the well saying the chair was being partisan. Some opposition members tore rulebooks, threw papers and advanced menacingly towards Harivansh before the marshals restrained them.

The house eventually passed the two contentious bills with a voice vote. The opposition parties then boycotted the session. On September 22, the house passed another bill, again with a voice vote. “The division (voting) could not have been allowed when there was ruckus inside the house,” said Union Law Minister Ravi Shankar Prasad. “The deputy chairman asked them to return to their seats 13 times.”

Farming has always been a sensitive issue in India, especially politically. For instance, parties have often won elections by promising farm loan waivers; the Congress won Madhya Pradesh, Chhattisgarh and Rajasthan in 2018, and the BJP won Uttar Pradesh in 2017 with a similar promise.

No one wants to alienate the farmers, and the Modi government knows that. For the first time, the opposition may have an issue that it can use to mobilise crowds against the government; it failed to do so during demonetisation and the rollout of the Goods and Services Tax.

The BJP, on the other hand, would need a massive awareness campaign to convince farmers that the bills would increase their incomes. Prime Minister Narendra Modi has been vocal about farmers’ interests, and said that the reform bills were “historic”.

Of the bills, the most controversial was the Farmers’ Produce Trade and Commerce (Promotion and Facilitation) Bill, 2020, which allows a farmer to sell his produce to anyone, anywhere. The existing Agricultural Produce Market Committee-run mandis and minimum support price would be kept intact. The farmer, however, would get the minimum support price only at the APMC mandis.

“These bills will give more profit to farmers and ensure greater participation,” said BJP Rajya Sabha member Bhupender Yadav. “The opposition parties do not want more money for the farmers. The lies of the opposition will be exposed. The MSP will stay.”

Politics aside, farmers’ organisations are on the warpath. A group of them has called for a bandh on September 25, and a meeting of all farmers’ unions in Delhi on September 27 to chalk out the course of action.

Said V.M. Singh, convener of the All India Kisan Sangharsh Coordination Committee, an umbrella organisation of more than 250 farmers’ unions: “We have the example of Bihar, which had abolished APMC in 2006. There, crops are sold below MSP. The same will happen elsewhere. The AIKSCC warns the government of nationwide unrest if MSP is not guaranteed.”

The Swadeshi Jagran Manch, which the Rashtriya Swayamsevak Sangh backs, also has asked the government to guarantee MSP, even in the private sector. “The farmers have poor bargaining power,” said SJM national co-convener Ashwani Mahajan. “They could be exploited, and thus need government protection.”

The mandis are a source of revenue for state governments. In Punjab, for example, sale and purchase of agriculture produce at mandis attract a tax of 6 per cent, along with arhatiya (middleman) commission of 2.5 per cent. This earns the state around Rs4,000 crore a year. The state governments stand to lose this revenue as the new reforms would introduce zero-tax trade areas outside the mandis.

Another point of contention is that, according to the bill, a farmer with a complaint would have to go to a sub-divisional magistrate for redress. This might discourage the farmers and also burden the magistrate.

The other two bills—the Farmers (Empowerment and Protection) Agreement on Price Assurance and Farm Services Bill, 2020, and the Essential Commodities (Amendment) Bill, 2020—have not faced as much resistance. The essential commodities act, a socialist-era law enacted during the time of food scarcity, had become obsolete. On September 22, the Rajya Sabha passed the bill to remove cereals, pulses, oilseeds, edible oils, onions and potatoes from the list of essential commodities. This would remove private players’ fears of excessive regulatory interference and would benefit a number of new agri-tech startups. Along with the

“Earlier, there was no clarity on the rules in different states,” said Karthik Jayaraman, CEO and cofounder, WayCool, a Chennai-based agri-tech startup. “Procuring was tedious. The new reforms will give greater freedom to us to expand, and source farm produce directly from farmers, instead of just the APMC. The farmers will benefit, so will new agri-tech companies.”

The second bill, for empowerment and protection of farmers, gives legal sanction to contract farming. This will allow big companies to sign contracts with farmers and use the land to grow crops of their choice. This is already done in several states. The government has also clarified that the farmer would not be at risk of losing his land, which many parties and farmers’ bodies had feared would happen.

Despite disagreements on many aspects of the bills, most people seem to agree that the private sector would gain from them, which would in turn help the economy. The trouble, though, lies in convincing the farmers, and the Modi government will have to work overtime to do so.