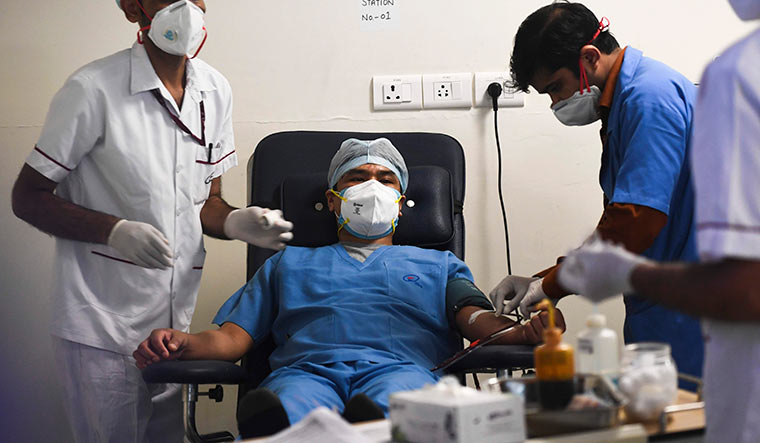 Life line: A plasma donor at the plasma bank of the Institute of Liver and Biliary Sciences, Delhi | AFP

IT IS A CENTURY-old way of treating viral diseases. In Covid-19, though, the use of antibody-rich convalescent plasma (CP), has been controversial given the lack of strong evidence.

“Ours is the world’s largest trial [of its kind] on plasma therapy,” Dr Balram Bhargava, director-general, Indian Council of Medical Research (ICMR), said in response to THE WEEK’s query on the plasma therapy (PLACID) trial. “The trial has been conducted on 464 patients, where 235 patients with moderate Covid-19 disease were given plasma, the rest were given best standard care. This was done in 39 hospitals across India, and we looked at whether it led to severe disease or death over 28 days.” The results of the open label, randomised controlled trial (RCT) published as a pre-print (peer-review pending) suggest that there was no difference in 28-day mortality or progression to severe disease among those studied.

“The study also indicates that the key point here is the high titre [levels] of neutralising antibodies for it to work, if at all,” said professor Sunit K. Singh, head, molecular biology, Banaras Hindu University. “Besides, we have to be sure that the donor does not have any viral RNA in their blood.”

The results of the PLACID trial only prove the doubts that have prevailed in the scientific community over the enthusiastic use of plasma therapy across the world. In August, the US Food and Drug Administration (FDA) granted emergency use authorisation (EUA) for plasma therapy amid a sharp debate around sufficient available evidence around its benefits. After experts like Dr Anthony Fauci and Dr Francis Collins argued that the data supporting its efficacy were too weak, the agency temporarily halted the approval, only to resume shortly after, presumably caving in to political pressure.

In India, CP therapy was approved for clinical trials in April, and the Union health ministry’s clinical management of Covid-19 protocol lists its use under “investigational therapies”. It allows for CP therapy to be considered in patients with moderate Covid-19 symptoms, who are unable to improve despite the use of steroids. Doctors have to ensure that the donor plasma matches with that of the patient and that neutralising antibody levels are appropriate, and patients are closely monitored for transfusion-related adverse events, it says.

The EUA by the US FDA was based on the encouraging results of the US-based Mayo clinic-led plasma therapy trial. But the trial, suggest independent experts and the latest ICMR study, is not impressive, despite being a large one with 35,000 patients. “It was only an observational study, and not an RCT that is the gold standard in evidence-based medicine,” said Dr S.P. Kalantri, department director-professor of medicine, Mahatma Gandhi Institute of Medical Sciences, Sevagram, Maharashtra. “In this open-label trial, the therapy was tested on the sickest of patients. The researchers found that plasma therapy was associated with a decline in death rates, but only if the therapy was used in the first three days. However, since an observational study lacks a control group, we do not really know if the benefit was due to the therapy or some other reason.”

Besides Kalantri says that a patient lands up in the ICU or is put on ventilator after the cytokine storm has set in. “This typically happens in the second week of illness. So how did half the patients land in the ICU within three days of admission?” he said. To know if a drug or therapeutic intervention works, one needs an RCT, which is not difficult to do, he said.

Although plasma is hugely popular and many hospitals are offering it, Kalantri says most centres administering plasma therapy in India do not have the facility to test the levels of neutralising antibodies. “It is like not knowing how much antibiotic is present in an injection before giving it. Unless we know for sure the precise concentration of neutralising antibodies, how do we know if it is enough to block the virus?” he said.

Given the lack of strong evidence, the WHO, too, advises the therapy only in clinical trial settings. In the wake of the EUA authorisation, Dr Soumya Swaminathan, chief scientist, WHO, said that the available evidence was “low-quality”. The treatment, she told the media, is difficult to standardise since people produce different levels of antibodies and plasma must be collected individually from recovered patients.

The WHO has also warned of the numerous side effects ranging from a mild fever and chills to more severe lung-related injuries.

Dr Sumit Ray, head of critical care, Holy Family Hospital, Delhi, said that both RCTs on plasma therapy done in India and China showed no significant benefit. Besides, Ray points to the issues in selecting patients for administering the therapy. “Once a patient gets a severe disease, they are experiencing a cytokine storm, where the virus has been cleared, but the immune system has gone into overdrive. Giving antibody-rich plasma may just worsen the disease. Though the therapy may benefit one subset of patients, where it can be given early, how does one select those patients? That aspect still needs to be studied,” he said.

The side effect of the therapy can be severe, causing transfusion-related acute lung injury, too, besides the dangers of blood clotting that has been a major issue in Covid-19, said Ray. Instead of using resources to finding a donor, filtering the antibody-rich plasma and monitoring for side effects, crucial resources should be diverted to improving critical care units, ensuring skilled manpower and conducting good trials, Kalantri said.