To keep China at bay, India works on its Buddhist legacy 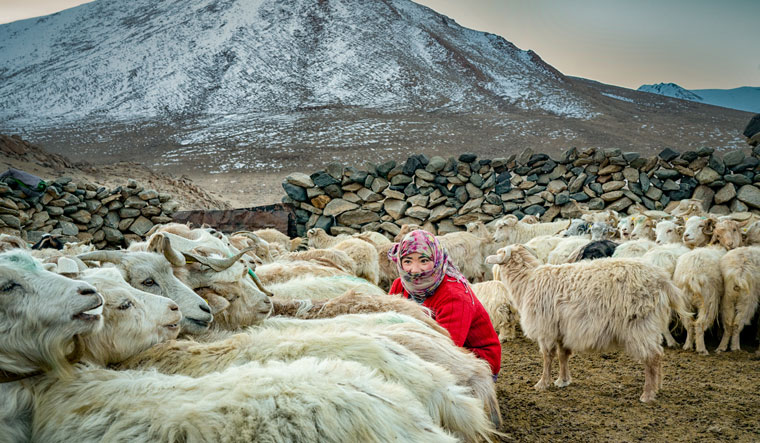 Reaching out: A file picture of a Changpa woman herding pashmina goats in Ladakh | Getty Images

As China continues to maintain an aggressive posture in Ladakh, New Delhi has also opened up non-military fronts to strike back. Lieutenant Governor R.K. Mathur, the former defence secretary, has been tasked by New Delhi to implement the strategy. He is being assisted by his adviser, 1989-batch IAS officer Umang Narula, Ladakh divisional commissioner Saugat Biswas and other senior officials. The Union home ministry is closely monitoring the developments, including disbursal of funds.

Late last year, at UNESCO, India had claimed that the 2,500-year-old traditional medical system called Sowa-Rigpa was part of its “intangible cultural heritage (ICH)”. After China challenged the Indian claim at the ICH meeting held last December in Bogota, Colombia, a final decision was deferred till the end of this year. China, supported by Pakistan, cited territorial dispute with India over Jammu and Kashmir, including the Ladakh border.

“As per UNESCO guidelines, China cannot raise territorial disputes at the forum,” said Dr Padma Gurmet, director in-charge at the Leh-based National Research Institute for Sowa-Rigpa. “We have submitted a lot of evidence in the form of Buddhist literature to prove that Sowa-Rigpa originated in India and was introduced to the trans-Himalayan region around the 8th century.”

Amitabh Mathur, former adviser to the home ministry on Tibetan matters, added, “The Tibetan Buddhist traditions are regarded to be a continuation of the Nalanda tradition. While China is trying to show that it is a Tibetan invention, the fact is that Buddhism was introduced into Tibet by great Indian masters like Shantarakshita and Padmasambhava.”

China, meanwhile, is said to be using Sowa-Rigpa to fight Covid-19. “As per reports, the Beijing Hospital of Tibetan medicine has prepared the ‘nine-flavour epidemic formulation’and distributed it to the affected areas,” said Gurmet, who has approached the AYUSH ministry to incorporate Sowa-Rigpa medicines as prophylactics in the fight against the pandemic. The ministry has constituted a five-member team, with Gurmet as its convener, to suggest Sowa-Rigpa interventions, to invite research proposals and to prepare guidelines for its practitioners.

If India wins at UNESCO, Ladakhi families which have continued the Sowa-Rigpa practice for over nine generations will benefit. It will help the Boto, Changpa, Drogpa, Gara and Balti tribes of the western Himalayas and the Bhoto, Lipcha and Tamang tribes and communities of central and eastern Himalayan regions.

China’s attempts to usurp trans-Himalayan Buddhism can be detrimental to India’s interests. One way to checkmate this, Mathur said, is to make the Central Institute of Buddhist Studies in Leh a university; now it is a deemed university. “It will allow students from the rest of the country and also from abroad to join the institute,” he said.

He also referred to Bakula Rinpoche, the great nationalist and champion of Ladakh, who established close relations with Mongolia while serving as Indian ambassador and became a revered figure there. “These cultural links with Mongolia, which practices a pure form of Tibetan Buddhism, can be deepened by inviting Mongolian monks to study in Ladakh. It will strengthen the objective of national integration and make Ladakh a base for extending India’s soft power of Buddhism.”

The Ladakh administration is also reaching out to the Changpa nomads who rear pashmina goats. These families frequent the pastures along the Line of Actual Control, thereby acting as the first line of defence. They are often the first ones to spot Chinese incursions and infrastructure upgrades. But these nomadic families have been moving away over the years, because of lack of adequate remuneration for their produce, absence of educational facilities and tough weather conditions.

Former Ladakh BJP chief Chering Dorjay said Indian troops, too, often challenged the grazing rights of the nomads. “If these nomads of the Changpa tribe go away, we will lose our first line of defence,” said Sonam Tsering, general secretary of the All Changthang Pashmina Growers Cooperative Marketing Society in Leh. “‘There are around 2,000 families who own sheep and goats, but the actual number of nomadic families is 1,200. The rest keep their livestock with other families and pay shepherds (to care for them).” 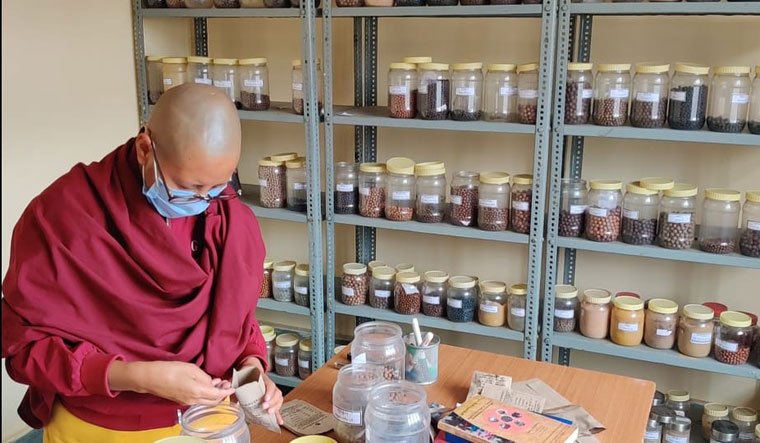 Keeping alive a legacy: A Sowa-Rigpa doctor at the National Research Institute for Sowa-Rigpa in Leh

After government intervention, the price of raw pashmina has gone up from Rs400 for a kilogram to up to Rs3,000. But it is still nowhere close to what cleaned pashmina fetches—Rs10,000 for a kilogram. Tsering said cooperative societies were trying to fix a minimum price for raw pashmina. “We are also trying for value addition and have started producing yarn and finished products on a trial basis,”he said. New textile units, better machines and transportation are huge challenges which the new administration has to surmount in order to capitalise on its assets. This can only happen if road and air connectivity is improved.

Biswas said road connectivity was being upgraded, with a focus on rural roads. The public works department recently completed the first double-lane bridge on the Indus at Choglamsar, a Tibetan refugee settlement and a centre for the study of Tibetan culture and history. Improving connectivity within Leh will benefit not only the economy, but also the Army.

Since Ladakh’s economy depends heavily on tourism, Biswas said the administration was considering introducing chopper services, gondolas and winter sports. The local economy is facing a major crisis with the Covid-induced lockdown; six months of harsh winter will make things worse. Hence, the push to make Ladakhis direct beneficiaries of the Centre’s flagship schemes like the National Rural Livelihood Mission, which allows women self-help groups to avail bank loans. “I am earning enough money to support my family and to pay my children’s school fees. When the women of the village come together, we are able to sort out so many problems,’’ said Zahra Bano, a self-help group worker.

But, more employment and more tourists will also bring more waste, which will pollute the scarce natural resources of Ladakh. The heavy troop deployment on the borders is already adding to the strain. The administration’s Project Tsangda aims to address this problem. The PWD and the Border Roads Organisation are using waste material for road construction; waste is also being used to make biofuel bricks. “While the assets have always been there in Ladakh and in the Himalayas, vested political interests have prevented the region from getting due recognition,” said Tenzin Tsundue, writer and Tibetan activist.

So while New Delhi rolls out its pushback policy, it needs to remember that the main source of strength on the borders is not only the Army, but also the local people. A major challenge that remains is building trust and synergy between the two major districts of Ladakh—Leh and Kargil. “The trust deficit that Ladakh had with Jammu and Kashmir can now be seen between Leh and Kargil,” said a senior official in Delhi. While Buddhist-dominated Leh is the capital of the Union territory, the Shia-dominated Kargil seems to be feeling left out. But, if the soft, cultural assets are nurtured well, India might be able to project Ladakh as the seat of national integration.