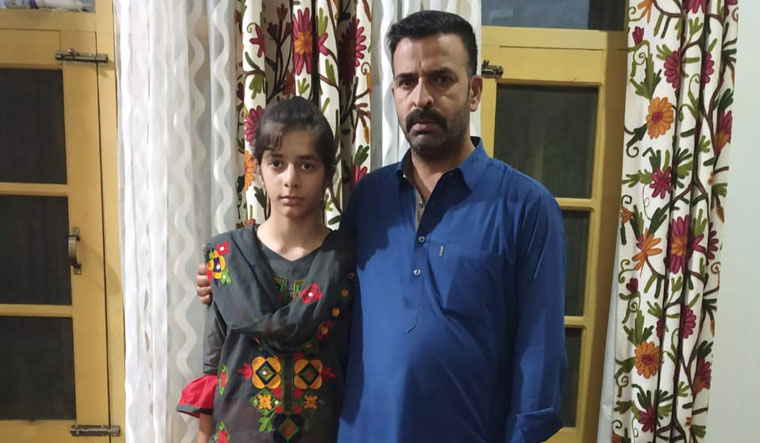 Sopore in Baramulla district is well known for its apples. In the 1990s, the heyday of insurgency in Kashmir, the affluent town was also known as a hotbed of militancy. On June 22, Sopore found itself once again in the news. Aliya Tariq, a school student in Sopore, became the first person to receive an online domicile certificate under a new law that was introduced after Article 370 was scrapped last year.

Politicians and separatists in Kashmir allege that the new law allows the Centre to change the demography of the Muslim-majority Union territory. Aliya’s father, Tariq Ahmed Longoo, was flayed for applying for the certificate. “A friend of mine in the revenue department told me how to apply for the domicile [certificate] online,” said Longoo, who was also helped by tehsildar Shabir Ahmed Wani and patwari (record keeper) Sajad Ahmed Lone in applying for domicile certificate online. “I completed all the formalities and, later, was called to the deputy commissioner’s office, where the certificate was issued.”

He said his decision to apply for the certificate was not political. “I applied for it because the school where my brother’s children study has asked for it,” Longoo said. “I have always kept my documents up to date.” Aliya said she went with her father to the deputy commissioner’s office to get the certificate. “Everybody needs it,” she said. “It is an important document.”

The certificate was presented to Aliya in an online event that saw the participation of Jammu and Kashmir Lieutenant Governor G.C. Murmu and chief secretary B.V.R. Subramanyam. “Aliya’s domicile certificate was issued by Murmu from his office,” said G.N. Ittoo, deputy commissioner of Baramulla.

The government has received 33,157 applications for domicile certificates; more than 25,000 have been accepted. Nearly 32,000 applications are from 10 districts of Jammu Division; there are only 720 from Kashmir. The most number of certificates in Kashmir have been issued in Pulwama (153), followed by Anantnag (106), Kulgam (90) and Baramulla (39). None of the 65 applicants from Srinagar have received certificates.

Omar Abdullah, National Conference vice president and former chief minister, criticised the issuance of the certificate to Chaudhary. “All our misgivings about the new domicile rules in J&K are coming to the fore,” he tweeted. “We in @JKNC_ opposed the changes because we could see the nefarious design behind the changes. The people of J&K on both sides of the Pir Panjal mountains will be the sufferers of the domicile rules.”

Omar’s father and NC president Farooq Abdullah, who represents Srinagar in the Lok Sabha, said the new domicile law was unacceptable. “The law is illegal, undemocratic and unconstitutional,” he told reporters on June 28. This is the first time the Abdullahs have openly criticised the Centre after they were released from detention in March.

According to the BJP, Article 370 had denied equal rights to communities like Balmikis and Gorkhas. “We are happy that finally we have been granted domicile,” said Labha Ram, president of West Pakistan Refugees Action Committee. “We are 20,000 families, but around 60 would benefit from the law as the rest don’t need it.”

Gharu Bhatti, president of the Balmiki Samnaj, said the community has long been waiting for this change. “We were brought here to do the jobs that locals don’t,” Bhatti said. “Our children who have postgraduate degrees had to do sweeping and scavenging jobs. We are 10,000 families and I hope our future generations will benefit [from the new law].”

According to the 2011 census, Jammu and Kashmir has a population of 1.23 crore. This includes 28.09 lakh migrants from other states. Currently, Muslims make up 68 per cent of the population. Since most migrants are likely to apply for domicile certificates, the share could go down significantly.

Despite militancy, Jammu and Kashmir has long been a migrant magnet because of better wages, good weather, quality infrastructure and free education. Migrant workers and tourists were seldom targeted by militants. The new domicile law could increase the flow of migrants into Jammu and Kashmir, altering the demography of the Union territory in a decade or two. The BJP sees the process as the only way to end separatism in Kashmir. But the new law has upset Kashmiri Pandits, too. Activist Satish Mahaldar said the Union government was giving domicile certificates to non-Kashmiris at the expense of Kashmiri Pandits. He said the process of issuing certificates should be stopped immediately. “The government had said that Kashmir Pandits would be rehabilitated in ten districts in Kashmir, but so far nothing has happened,” he said. “We demand that the government immediately come out with a rehabilitation policy for Kashmiri Pandits.”