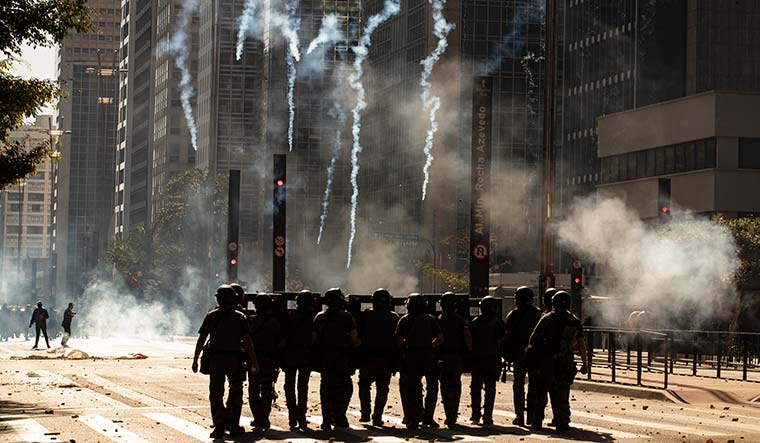 It is 6:49pm in São Paulo. The silence of the quarantine is broken by shouts unleashed from deep within desperate souls. “Fora Bolsonaro (Get out, Bolsonaro),” they say, “to save our lives.”

The Covid-19 pandemic is only one half of the double-barrelled cannon of fear and dread pointed at the people of Brazil, the second most-populous country in the Americas and the second most affected in the world by the virus. The other half is the inflexibility of its far right president Jair Messias Bolsonaro, who has been actively undermining quarantine and preventative measures adopted by its states in favour of a machismo that sells well with some 25 per cent of the population—the ones who join the president in his mask-less, gun-toting, flag-waving rallies, calling for the opening of malls and schools. Under the smokescreen of political controversy and the fog of war against an invisible enemy, Brazilians are fighting for their lives.

In São Paulo, the country’s most populous city and the current epicentre of the pandemic in Latin America, frustration boils over whenever Bolsonaro appears on television. Residents stand at their windows, banging pots and shouting “Fora Bolsonaro”.

The state of São Paulo, the first to register a Covid-19 case in Brazil, has 1.23 lakh confirmed cases and 8,276 deaths as on June 6. Panic is palpable in the streets as masked people could be heard shouting at others to stay safely away, a man at an ATM breathing uneasy at people forming a queue, another one holding up his open palms to stop others from entering the elevator when it opened at an intermediate floor.

All of this happens in a setting of empty concrete canyons and closed businesses in the normally electric neighbourhood in the centre of the city. In the world’s largest residential building, the iconic Edifício Copan, residents help each other stay in quarantine, they support businesses in the building by buying from them and provide meals to the homeless in the neighbourhood.

The economic stress has triggered a negative vibe in the city that is struggling to keep alive the classic Brazilian attitude to life. It used to be said of São Paulo that its bars were full of empty souls. It is now a city of empty bars, filled only with the souls of those who used to frequent them. Thriving businesses and must-visit locations like the Galeria do Rock mall have closed their doors for good, shutting down 30 stores and costing hundreds of jobs. There have been thousands of such cases across the massive country, which is now staring at a serious economic recession.

In São Paulo, intensive care units now have an occupancy rate of 84.7 per cent, although the city is yet to hit the peak of infections. Among citizens, there is the nagging fear that Bolsonaro’s macho drive will prevail as the way Brazil deals with the pandemic. “I am not afraid of a little virus. It is just a little cold,” says Bolsonaro. “A knife didn’t kill me (referring to being stabbed during his presidential campaign).” When the country neared 10,000 deaths, he planned a no-mask barbeque at the presidential palace. After political pressure forced him to cancel the cookout, Bolsanaro went jet skiing and showed up at a beach barbecue, shaking hands and disregarding preventative measures. He is pushing the idea that 70 per cent of the people would be infected and a small portion would die, “but that is better than starving to death,” a reference to the economic woes of people who have no savings, no food and no way of finding any work in a quarantined country.

All of this is accompanied by a disinformation campaign that pushes a ‘Make Brazil Great Again’ ideology and provides just the right amount of false news to fuel his now-banned ‘Brazil Cannot Stop’ anti-quarantine campaign. Back in December, congresswoman Joice Hasselmann told a parliamentary commission about a fake news scheme linked to Bolsonaro and his two sons, Carlos and Eduardo. The federal police later identified Carlos as one of the leaders of what it called “an illegal disinformation scheme”.

Fake news has been at the centre of Bolsonaro’s Covid-19 denial. A fake social media post that said that the hard-hit Amazonas state was falsifying its death toll by burying coffins full of rocks was shared more than two million times, despite the horrific scenes of death from its capital, Manaus. The health care system in Amazonas has collapsed, and so has its burial and cemetery systems. São Paulo, too, is facing a similar crisis. By late May, the city’s cemeteries saw an average of 11.4 burials an hour. 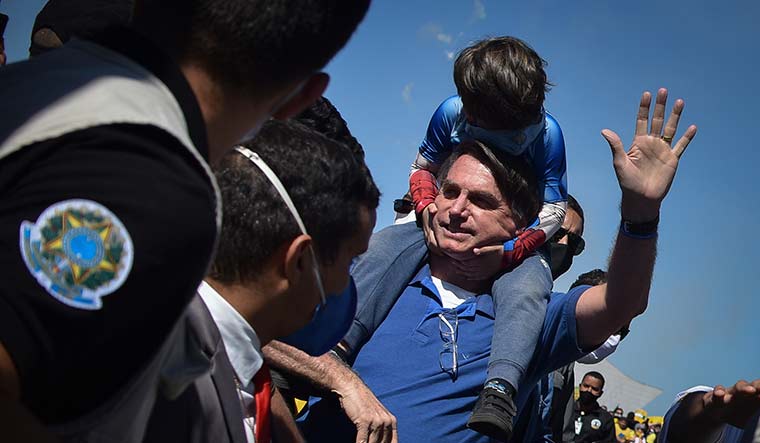 Ignorance at play: President Jair Bolsonaro carries a boy on his back as he greets supporters gathered outside the presidential palace in Brasilia | AP

But Bolsanaro keeps on repeating that it is all hysteria. Like US President Donald Trump, he, too, ignores the recommendations of top epidemiologists and wants “immediate return to normalcy.” Quarantine, for Bolsanaro, is a “crime”.

Convinced that his political future depends on it, Bolsonaro is out to get the economy going, no matter what it costs. “Some people are going to die. They will die. Sorry. That’s life,” Bolsonaro can be heard saying on camera. “They are trying to get Brazil into bankruptcy with that fear-mongering…. The best remedy for the disease is work. If someone can work, they have to go back to work. You cannot hide. It is not okay to be quarantined at home, who knows for how many days.”

Bolsonaro’s conscious downplaying of such a public health catastrophe is in conflict with the policy adopted by most states in the country. The states have taken seriously the responsibility for the lives of their citizens and have implemented serious quarantine and prevention strategies. Bolsonaro himself sends contradictory messages, wearing a mask at times, appearing without one sometimes and taking it off when he comes near people.

Clinical studies have shown that using hydroxychloroquine to treat Covid-19 can be fatal.The World Health Organization halted its use after clinical trials showed that Covid-19 patients who used the drug were at a higher risk of death and cardiac problems.

All of this adds to despair and it may be pushing Brazil to the brink of social unrest. The states are releasing some of the pressure by moving to a more dynamic quarantine in June, which is quickly deteriorating into social chaos. The São Paulo administration is concerned about the prospect of looting in the city. The rapidly deteriorating situation is raising questions about Bolsonaro’s competence to remain as president.

Bolsonaro, who was a young army captain during Brazil’s darkest period of military dictatorship, is facing the threat of impeachment for his mishandling of the Covid-19 crisis, for blatant corruption and for electoral fraud, which could, under Brazilian laws, result in the voiding of the election and his removal from office. His response so far has been in feisty Trump-like fashion—warning the press, the state governors, the congress and the supreme court judges of “their guilt” in “usurping the role of the executive”. Praising the torturers in the military dictatorship, Bolsanaro openly advocates a military coup against the congress and the courts, while demanding dictatorial powers for himself.

And so, the world’s fifth largest country is under the attack of two dreadful enemies: a deadly virus that threatens to change society and the life as we knew it, and a man who threatens to destroy Latin America’s largest democracy with his dictatorial, pro-military and anti-democratic policies.

Martinic is a writer and researcher.