How residents of Edificio Copan are coping with Covid-19

The city flickers with a pale glow

And all the shadows that come and go

Sometimes I can hear them laugh and cry

In my lonely room with a view

Window to the World

The wavy accent mark over the ‘ã’ in São Paulo lords over the city of 21 million through a massive and emblematic building— Edificio Copan, which holds the Guinness record for having the largest floor area of any residential structure in the world. Home to 5,000 people, the building is the largest postal code in the city. It has a population which is larger than 547 Brazilian cities, and a survival spirit which is larger than life. It is the soul of São Paulo, views from the building are to die for and it is not a bad place to live out the Covid-19 pandemic.

From Copan, it seems as if the city was built around it. It helps that it is made in a shape that evokes the very name of the city. The building was designed by Brazil’s superstar architect Oscar Niemeyer, the man who also designed Brazil’s capital, Brasilia. A measure of its impact on modern design can be seen in the cross-section of Brazilian society that resides in Copan; a large number of them are architects and design professionals. 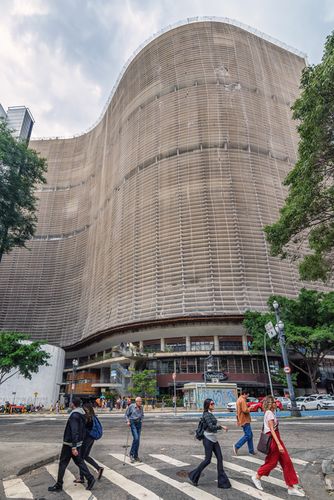 It is the north façade that has the more elaborate special architectural treatment with its fanciful brise soleil, a curving louver that deflects sunlight and shapes the building’s imposing façade. The sections are wonky and the fire stairways artistically corkscrewed. The streets flow into the building through five gates, following the slope of the city itself. There are stores, restaurants and services along an inclined indoor street, though many are now closed—some forever—because of the pandemic. Residences are divided into six independent blocks serviced by some 20 elevators, giving residents the feel of living in a far smaller building, in a cosy, quiet neighbourhood. On its floors, the air is heady with the atmosphere of São Paulo.

Local gossips say it has inspired filmmakers, artists, photographers, writers and more. Indeed, like New York’s landmark Plaza Hotel serves as the setting for the Eloise at the Plaza books, Copan is the star of the award-winning Portuguese-language book Arca sem Noé - Histórias do Edifício Copan (Ark without Noah).

When danger was raining on São Paulo in the form of the pandemic, the building did have a Noah—Affonso Celso Prazerers de Oliveira, its 80-year-old general manager. He executes his job like an art, so much so that the building’s residents refer to him reverently as “The Mayor”. More than a month before the first case of Covid-19 was reported in Brazil, De Oliveira turned the building into an ark by laying down protective measures to save the lives of the residents and the 102 employees. He stopped the terrace tours that offered the most spectacular, panoramic views of São Paulo to hundreds of tourists from all over the world.

When Covid-19 hit, at de Oliveira’s direction, crews began to sterilise the sidewalks outside the building and all hallway floors inside; they cleaned and sanitised the entire 20,000 square metres every 24 hours. Elevators were cleaned more frequently, and call-buttons on all floors were wiped down. Vulnerable Copan workers were paid to stay at home and those living far away were given a transportation stipend so they could avoid using public transport. “Solidarity,” says de Oliveira, is the key to effective protection of citizens. “That is the spirit that prevails in Copan.”

“Copan is at the intersection of the upper and the lower middle class of São Paulo,” says Dr Eswar Chukaluri from Hyderabad, who stayed near Copan during the Carnival. “Walk 100m towards the upper middle-class side, and you will see expensive grocery shops and people dressed in bohemian clothes; walk 100m in the other direction, and you will see homeless people and addicts.”

Chukaluri says, in Copan, you did not need to go to the Carnival—it came to your doorstep. Then came Covid-19 with a whimsical nickname called corona, making it sound perhaps less lethal and more distant. The Carnival was the perfect petri dish for breeding a pandemic hotspot.

“The state imposed a hurried quarantine,” says Chukaluri. “There was no ‘indoors’ for the homeless on the streets, living only a few metres from the folks in Copan. The streets became increasingly desolate and the homeless increasingly desperate as they depended on the food thrown in the bins. They picked this food during the nights, when the city was asleep; they slept during the day, when the city was awake. This balance, which ensured a peaceful life around Copan, was brutally disturbed within a week. One can imagine what hunger can do to people. Yes, violence! The more desperate the homeless and the drug addicts became, the more brazen the attacks became.”

That was the beginning.

Moved by the plight of the homeless, Copan residents raised funds and cooked meals for them. Copan itself now contributes all income from its recyclables to the effort. Its residents took the risk of exposing themselves to the virus so that others could live.

Many of the 72 businesses in the building depended on tourists and foot traffic, which are now non-existent. These shops are now closing or reducing hours, renegotiating rents, cutting staff and trying hard to see a bright future, knowing that the only option may be to close doors forever.

As for those going into their third month of isolation in the building, and all of those who come home to Copan after running the gauntlet of the virus, their solace is in those big picture windows that let them see the city’s shadows come and go, safely from any one of the thousands of lonely quarantine-rooms with a view.