Mystic and the moolah 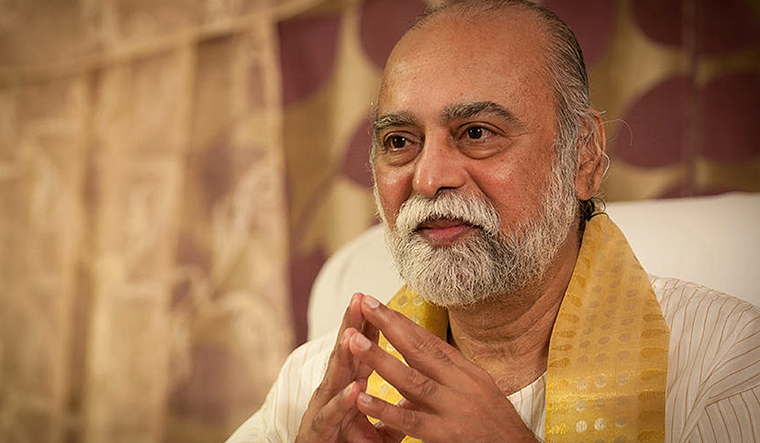 The Rayalaseema region in Andhra Pradesh is known for its arid landscape and recurrent droughts. But it has long been fertile ground for bloody political feuds and powerful godmen.

At Puttaparthi in Anantapur district, Satya Sai Baba had celebrities and heads of states queuing up to seek his blessings. Bala Sai Baba, of the neighbouring Kurnool district, also had a large number of followers in India and abroad. Both the controversial godmen are no more, while a third notable name, Kalki Bhagwan, is under the scanner of the income tax department and Enforcement Directorate.

In October, a series of raids on 40 properties in Chennai, Hyderabad, Bengaluru and Chittoor revealed that trusts and businesses controlled by Bhagwan had unaccounted income of more than Rs500 crore. The IT department unearthed Rs93 crore in cash and Rs409 crore in other assets. “There was about 2.5 million (approximately Rs18 crore) in US dollars alone,” said a statement issued by the department. “About 88kg of undeclared gold jewellery, valued at Rs26 crore, and diamonds weighing 1,271 carats, worth about Rs5 crore, have also been seized.”

Born Vijayakumar Naidu at Natham in Tamil Nadu in 1949, Bhagwan started his career as a clerk with the Life Insurance Corporation of India. In 1984, he and his close friend Shankar started a residential school at Rajupeta in Andhra Pradesh. Called Jeevashram, the school aimed at “providing alternative education and inculcating spirituality”.

By 1989, he had groomed himself as a godman, calling himself Kalki, after the 10th avatar of Lord Vishnu. His philosophy of ‘oneness’ and ‘instant nirvana’ became popular, helping him establish ashrams in Tamil Nadu, Andhra Pradesh, Karnataka and Maharashtra. Devotees began referring to his wife, Padmavathi, as Amma Bhagwan.

Bhagwan, 70, charged Rs5,000 for each darshan; for special darshans, the fee was Rs50,000. As the number of followers grew, he built a ‘oneness temple’ on 400 acres at Tada village on the Tamil Nadu-Andhra Pradesh border. A monolithic structure of white marble, the temple is a blend of Buddhist and Hindu architecture, replete with stupas, spires, domes, ornate doors and latticed windows. It has a sprawling meditation hall that can accommodate 8,000 people, and at the centre of the hall is a huge, garlanded picture of Bhagwan and his wife.

A week after the raids, both of them released a video saying they had not abandoned the faithful. “We have not left the country,” Bhagwan said. “We are at Nemam, conducting classes and helping you. Activities continue as usual.”

THE WEEK visited Bhagwan’s ashram at Nemam near Chennai, but found the gates locked. A security guard with a vermillion on his forehead said Bhagwan was not in the ashram. He opened the gate to reveal a sprawling entrance hall that was dark and deserted. A mural of the Buddha adorned one wall, and near it were eleven glass-panelled cash counters, all closed. “Please go,” said the guard. “You can’t come in here, because you are from the media. There is nobody here.”

Investigators say Bhagwan laundered money and purchased assets abroad through hawala transactions. His son N.K.V. Krishna, who runs the ashram, and Krishna’s wife, Preeti, were questioned by the income tax department. Krishna also runs several companies that are into real estate, construction, publishing and microfinance. The ED has registered a case against Bhagwan and Krishna under the Foreign Exchange Management Act.

This is not the first time Bhagwan and his family have come under the scanner. In the early 2000s, Bengaluru-based activist and former devotee Vishwanath Swami alleged that Bhagwan and his ashram were involved in money laundering. In September 2013, the income tax appellate tribunal in Chennai found Krishna guilty of tax violation and unlawful acquisition of agricultural land.

The ED and the IT department have reportedly questioned Lokesh Dasaji, the manager of Kalki Ashram Trust. When THE WEEK contacted him, Dasaji said he was in Delhi. “We don’t have anything to tell the media now,” he said. 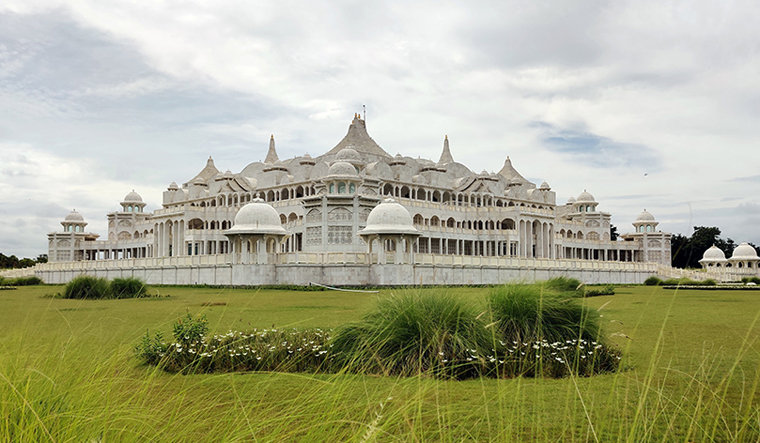 seat of spirituality: The ‘oneness temple’ at Tada

Sources in the IT department said Bhagwan’s proximity to the Telugu Desam Party was a prime reason for the raids. “The leads came from several raids in the past few years. Political links are not the only reason. There are multiple allegations of money laundering as well,” said one official.

Bhagwan openly supported the TDP in the Lok Sabha and assembly elections in Andhra Pradesh this year. Leaders of the YSR Congress and other opposition parties alleged that the TDP ran its campaign in Satyavedu, the assembly constituency that includes the ashram, with the help of Bhagwan’s employees who doubled as party workers.

“My opponent and the TDP candidate lived in the ashram during the campaign,” said K. Adhimulam, YSR Congress leader who won from Satyavedu. “TDP workers and their families stayed in the ashram and participated in the campaign. Local party workers informed me that the ashram’s staff were closely involved in distributing money to voters. This was not new; the same thing had happened in the 2014 elections, too.”

Workers of the CPI and CPI(M) had long opposed Bhagwan and his efforts to expand the ashram. In the 1990s, they had organised protests against the ashram for buying hundreds of acres at cheap rates from local farmers. Party leaders said the protests were partially successful; a few farmers got their land back.

“In the last elections, our party workers approached the people running the ashram,” said a senior CPI leader in Chittoor district. “We asked them whether they could donate to our campaign. They never gave a single rupee. We came to know that the ashram did not give money to other political parties as well. They were actively funding the TDP’s election activities.”

Bhagwan and the top leaders of the TDP, including former chief minister N. Chandrababu Naidu, belong to the politically dominant Kamma community. When the TDP was in power, said sources, at least three ministers used to frequent the ashram.

Apparently, Krishna has deeper links with the party. He is said to be the co-owner of the news channel Studio N, which was founded and run by TDP loyalists. The office of Studio N was recently raided by the IT department. Krishna reportedly controls the activities of the ashram and related businesses now, as Bhagwan is said to be suffering from health issues.

According to a person who was once closely involved with the ashram, Bhagwan’s spiritual empire is still largely intact. “The organisation is sitting on a real estate goldmine,” he said. “They do not need money from devotees. Each acre they had bought for Rs5,000 to Rs10,000, near the industrial belt on the Andhra Pradesh-Tamil Nadu border, is valued at more than Rs1 crore now. The extent of land they bought in Andhra Pradesh, Telangana and adjoining states is very hard to estimate.”