On his first visit to Amethi post his defeat, Rahul calls for organisational revamp 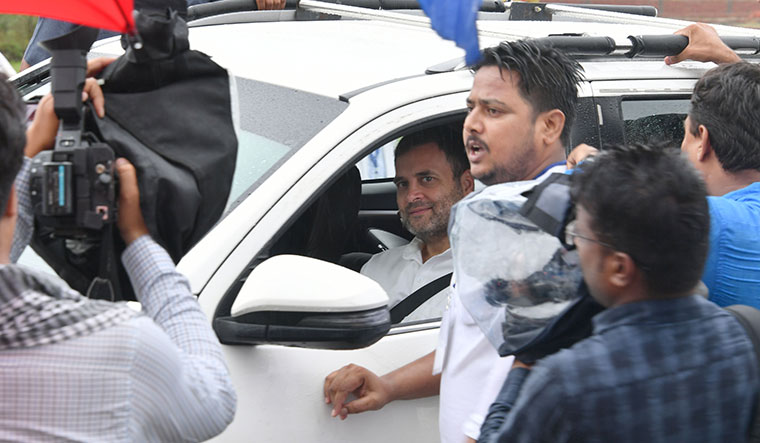 AS RAHUL GANDHI arrived to meet party workers, it poured in Amethi—the gloomy weather reflecting the mood in the Congress. It was his first visit to the constituency since his shocking defeat to BJP’s Smriti Irani in the Lok Sabha polls.

A few hundred party workers attended the meeting on July 9, braving the incessant rains to reach Nirmala Institute of Women’s Education in Gauriganj. The perfunctory slogans in praise of Rahul were raised as he walked in. But the feeling of dejection was unmistakable on both ends of the dais.

Those who attended the closed-door meeting said Rahul smiled, but his face betrayed a deep sense of hurt. He spoke with a lot of emotion, they said, assuring workers that his association with Amethi was intact despite the defeat. “Sadak se sansad tak aapki ladai ladunga, aapke muddon ko uthata rahunga (I will fight on your behalf, from the streets to Parliament. I will keep raising your issues),” he told them. “Whenever you need me, I will be here, be it day or night.” He described his visit to Amethi as “homecoming”, underlining the traditional connect the Gandhi family has had with the constituency. In return, workers implored him to stay on as Congress president.

While the main aim behind the visit was to reassure workers about his continued association with Amethi, Rahul firmly told local functionaries that the defeat reflected on them as much as it did on him, and that they, too, had to shoulder the responsibility for the loss. He also hinted at the need for a change in the way the organisation worked here.

Around 25 party workers spoke at the meeting that lasted an hour and a half, and many of them complained against office-bearers at the district level, saying that they got into election mode only about 10 days before polling. There was a huge disconnect between office-bearers and workers and the opponent was taken lightly, they said. Also, a constant refrain was about how the administration had been hostile to them. The meeting, which was expected to last around three hours, was cut short as angry workers raised slogans against local leaders, including former district president Yogendra Mishra and Chandrakant Dubey, Rahul’s representative in Amethi.

“Rahulji was right in saying that he was let down by the organisation,” said party worker Anand Pratap Singh from Salon. “Those who call the shots in Amethi are complacent and have conducted the election campaign over phone. They did not bother to visit the villages.” Irani’s team, on the other hand, fanned out all over the constituency, building an extensive network in villages and promoting the Modi government’s schemes for rural India, said Sudhanshu Singh, a Youth Congress functionary.

After trying to blame the Samajwadi Party and the Bahujan Samaj Party of non-cooperation, faulting electronic voting machines and even accusing the BJP of using pressure tactics, the Congress is finally looking inwards for its defeat in Amethi. But the party will have to make drastic changes if it wants to remain in the fight. The defeat to Irani came as a psychological blow—Rahul lost to Irani by 55,000 votes, and this was only the third time that the Congress has failed to win the seat. A major reason for the poll verdict is said to be the restlessness of its residents with the slow pace of development.

“People remember the legacy of Rajiv Gandhi and feel that maximum development took place when he represented the constituency. Factories came up, agriculture got a boost, infrastructure was improved,” said political expert Prof Ram Bahadur Verma. “It was now increasingly being felt that being a VIP constituency was not translating into much benefit for the people.” This showed in the decline in the Congress’s vote share in Amethi in recent years. Rahul’s margin of victory fell from 3.7 lakh votes in 2009 to around 1.07 lakh votes in 2014. In the 2017 Assembly elections, the Congress failed to win a single seat in the constituency.

However, Rahul’s supporters said that several projects begun by him have been stalled, including a rail link connecting Unchahar, Salon and Amethi and setting up of two Kendriya Vidyalayas. Also, an IIIT that was functioning for 11 years has been closed down, a mega food park has been cancelled and a unit of Hindustan Paper Mills has been shifted from Amethi to Maharashtra, they added.

Still, the swirling doubts about Rahul’s commitment to Amethi were made the focus of Irani’s campaign, dubbing him as an ‘absentee MP’. When he decided to contest from Wayanad, Kerala, she said it was a betrayal of the trust reposed in him by Amethi’s people. And, she fashioned herself as the highly approachable ‘didi’ as against ‘Rahul bhaiya’, who was not easily accessible. Her claims of having visited the constituency more number of times than Rahul since 2014, when she lost to him, also seem to have struck a chord.

The sustained efforts of the local BJP team in ensuring delivery of Central schemes, too, worked in her favour. “In the last five years, Irani has done more work than what has been done in the last 15 years. Be it gas connection or pucca houses, the villages have benefited a lot,” said Vishnukant Tripathi, a farmer from Gauriganj.

However, the Congress finds hope in history, pointing out that Indira Gandhi lost Rae Bareli in 1977, but made a strong comeback three years later. “Rahulji got 4.13 lakh votes, which is more than the 4.08 lakh votes he got in 2014. So, Amethi is still with Rahulji. The people of Amethi will never be able to feel the same kind of love and affection for Irani as they have for the Gandhi family,” said Congress leader Akhilesh Pratap Singh.

But making a comeback will be a challenge, considering Irani is here to stay, literally. A stone’s throw away from the building where Rahul met party workers is the plot that Irani has picked for her own house in Amethi.