How BJP's expansion plan is designed to divide opposition parties 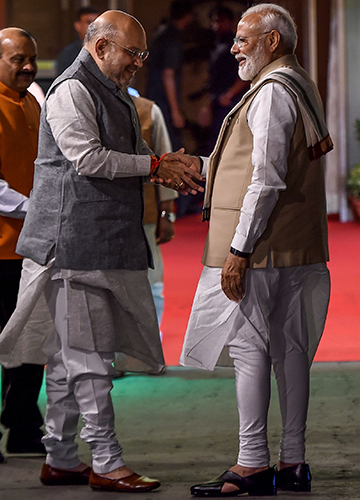 Best laid plans: Under Modi and Shah, the BJP is focusing on building on its strengths | AFP

THE BJP’S SHINING victory in the Lok Sabha polls had a big black blot the size of Andhra Pradesh.

The party was so severely drubbed in the state that it scored less than 1 per cent votes in both the assembly and Lok Sabha elections held simultaneously there. Not only did the BJP lose seats it had won in 2014, it also got less than six lakh votes combined. Embarrassingly, the party claims to have 25 lakh members in the state.

The BJP, however, has turned the poll drubbing into a perception victory. Within a month after the results, four Rajya Sabha members of the Telugu Desam Party, the main opposition party in Andhra Pradesh, were inducted into the BJP. With Jaganmohan Reddy, chief minister and YSR Congress president, going after TDP president N. Chandrababu Naidu, many in the TDP are seeking shelter in the saffron camp.

Despite drawing a blank in the polls, the BJP is projecting itself as the main opposition party in the state. “People of the state wanted the BJP,” said Sunil Deodhar, the BJP’s national secretary in charge of Andhra Pradesh. “But they voted to defeat Naidu. Now many leaders are joining us. What brings them to us is that they know they will not be able to win on their own.”

The BJP’s lightning moves have stunned opponents in other states as well. In West Bengal, six legislators of the ruling Trinamool Congress and hundreds of councillors have joined the BJP. In Maharashtra, Radhakrishna Vikhe Patil quit as the leader of opposition in the assembly to join the ruling BJP. Many of his former Congress colleagues are likely to follow suit before the assembly elections later this year.

In Haryana, five Indian National Lok Dal (INLD) legislators have joined the ruling BJP, while the resignation of two Congress MLAs in Karnataka has left the Congress-JD(S) government on shaky ground. Delhi, where assembly polls are due early next year, has also seen leaders quitting the ruling AAP to join the BJP.

At play in all these states is Amit Shah’s scorched-earth policy. The Union home minister and BJP president works towards not just election victories, but also mentally overpowering opponents. His sharp message in Andhra Pradesh was for Naidu, who had quit the BJP-led National Democratic Alliance a year ago and was planning to play kingmaker in the event of a hung Parliament. After the results, Shah ridiculed Naidu for focusing on cobbling together an anti-BJP coalition than on ensuring the TDP’s victory. Poaching TDP leaders was the BJP’s way of adding injury to insult.

In West Bengal, Chief Minister Mamata Banerjee is facing a similar assault. With assembly polls due in 2021, hostilities between Trinamool and BJP workers have intensified. “The anarchy is increasing,” said BJP general secretary Kailash Vijayvargiya. “After the [Lok Sabha] results, Mamata Banerjee lost her mental balance, as is evident in the way she is handling the administration. Thousands want to join the BJP as they trust Prime Minister Narendra Modi.”

With assembly elections in Haryana, Maharashtra and Jharkhand due later this year, and Delhi early next year, the BJP is busy inducting leaders of all ideological hues. “The [ideological] purification can wait; now we need to build on our strengths,” said a BJP leader.

The BJP onslaught in Haryana, where the party won all 10 Lok Sabha seats, has left the Jat-dominated INLD in disarray. The BJP began attracting the INLD’s Jat leaders into its fold after it inducted Birender Singh, grandson of peasant leader Sir Chhotu Ram, in 2014. Singh had been in the Congress for four decades.

The BJP is also focusing on uprooting another major opponent, Congress veteran and former chief minister Bhupinder Singh Hooda. The party has tried to corner Hooda by inducting leaders who had contested against him earlier—such as Dharampal Makroli and Prem Singh—and highlighting the CBI cases against him. “Our aim is to win,” said state BJP president Subash Barala. “When the people’s mood and our strategy match, we win.” 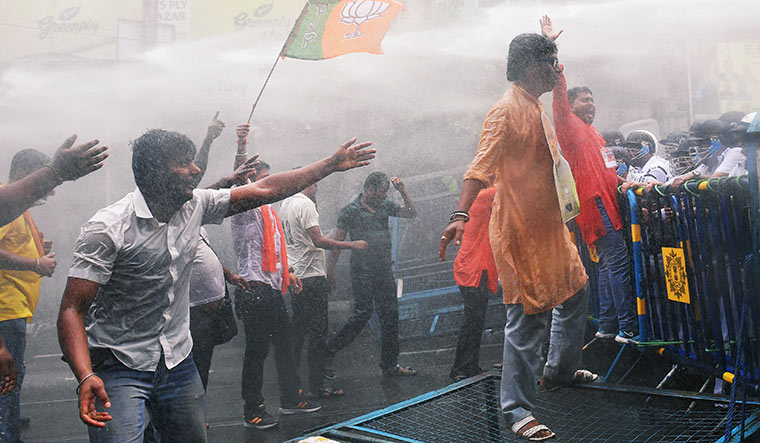 Lotus surge: Hostilities between the BJP and the Trinamool have intensified in West Bengal | Salil Bera

The BJP first came to power in Haryana in 2014. It chose a non-Jat, Manohar Lal Khattar, as chief minister to send a message to the sizeable Punjabi community in the state, which had overwhelmingly voted in favour of the BJP.

The influential Jat community, which makes up nearly 30 per cent of the state’s population, has since been accusing the state government of failing to protect their interests. But the Jat protests seem to have had no impact on the Lok Sabha results.

Haryana has traditionally voted for the party in power at the Centre, so the BJP is eyeing 65 of 90 seats. “We do not discriminate,” said Barala. “Government schemes were given to all the communities on the basis of merit. Khattar is a good administrator.”

The BJP had done a Haryana-like experiment in Jharkhand, too, by appointing a non-tribal as chief minister in 2014. Party leaders say Raghubar Das was chosen as the BJP wanted an able administrator who could govern well and help it dominate Jharkhand as it did in Chhattisgarh, where the party ruled for three consecutive terms.

Das’s focus on welfare measures helped the BJP and its ally, the AJSU Party, win 12 of 14 Lok Sabha seats in the state. In March, two Rashtriya Janata Dal leaders, Annapurna Devi and Girinath Singh, joined the BJP. Devi is now a Lok Sabha member. “All our opponents have gone into silence,” said state BJP president Laxman Giluwa. “If Lok Sabha elections are considered, we lead in 63 [of 82] assembly seats. This time we have set a target of 65-plus seats.”

Modi was in Jharkhand’s capital, Ranchi, while Shah was in Rohtak, Hooda’s stronghold, to celebrate International Yoga Day on June 21.

The BJP’s strategy of countering its opponents appears two-pronged. The party sees merit in marginalising, rather than decimating, the opposition. Also, whenever it forayed into unchartered territories, it has shown care to assimilate local symbols and icons, so that it is not perceived as a party of the Hindi heartland or of the upper castes.

The Goa example is illustrative. In 2017, chief minister Manohar Parrikar advocated that the BJP break ties with the Maharashtrawadi Gomantak Party and go it alone in the assembly polls that year. But the MGP so eroded the BJP’s vote share that the saffron party could not get majority. They had to join hands to form the government. Now, having lost two of its legislators to the BJP, the MGP has been sidelined. “It’s better to marginalise than fully oppose,” said a BJP leader.

The BJP has also reaped rich dividends by appropriating regional icons like Rani Gaidinliu in Nagaland, Bir Bikram in Tripura, Raja Suheldev in Uttar Pradesh, Birsa Munda in Jharkhand and Chhotu Ram in Haryana. It is now looking to replicate the strategy in south India.

“We will be celebrating the anniversaries of local heroes and freedom fighters, and stress on Telugu asmita (pride),” said Deodhar. “We are pushing for publicising Central government advertisements in Telugu so that Modi’s policies are known here. I am also learning Telugu.”

Regional parties that have realised that they cannot take on the BJP have made peace with it. YSR Congress has good relations with the BJP. The Biju Janata Dal in Odisha recently pledged support to send a BJP candidate to the Rajya Sabha. Even Mamata has held out olive branches. The Trinamool recently backed the Union government in the Rajya Sabha over a bill concerning Jammu and Kashmir; Mamata sent a box of sandesh to Om Birla after he was elected speaker of the Lok Sabha.

But the let-ups do not mean that the BJP will not try to enter the space occupied by its opponents. For now, the party may be content to play the marginalisation game, which has been most evident in the case of the Congress. BJP leaders no longer use the ‘Congress-mukt Bharat’ rhetoric, and Modi recently told opposition parties that the government values their inputs.

Congress leaders, however, allege that the government continues to treat the opposition shabbily, citing the move to reduce the staff strength allocated to former prime minister Manmohan Singh, the denial of permission to former Assam chief minister Tarun Gogoi to hold a press conference in Assam Bhawan in Delhi, and the government’s reluctance to grant the Congress the post of the leader of opposition.

The leadership crisis in the Congress has not helped the cause of opposition unity. There is no coordinated attack on the government both in and outside Parliament, and unlike in the past, opposition parties held no meeting to formulate plans before the budget session. It was only before the debate in the Rajya Sabha on the extension of president’s rule in Jammu and Kashmir and the short discussion on electoral reforms, that the parties tried to work out a common opposition strategy.

Will that be sufficient to counter the BJP? Certainly not. On the contrary, it shows that the BJP’s strategy to disintegrate, rather than eradicate, the opposition has so far been a success.