How newly-formed space, cyber and special operations units will help the armed forces 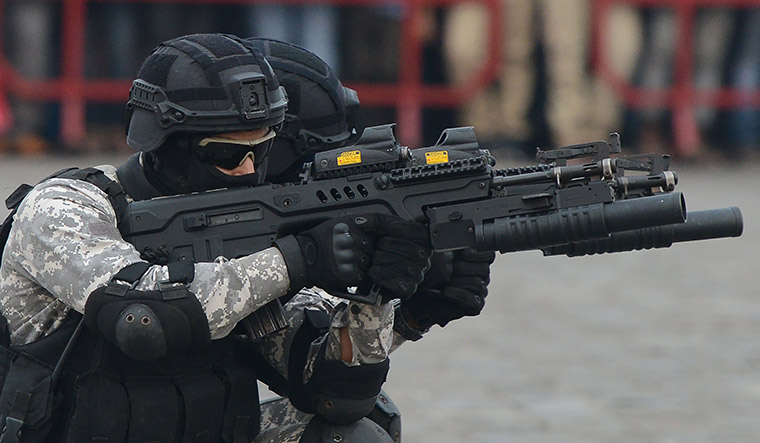 Shadow warriors: The Special Operations Division will have recruits from the Navy’s Marine Commandos (MARCOS, in pic), the Army’s special forces and the Air Force’s Garud team | AFP

A TEAM OF 25 US Navy SEALs took just 40 minutes to carry out the secret mission that killed the world’s most wanted terrorist. On the night of May 2, 2011, SEAL Team Six flew in on two stealth helicopters into the garrison town of Abbottabad in Pakistan, and raided Osama bin Laden’s house. The world came to know of the operation only the next day.

Very few countries have the ability to carry out such high-precision hits. Soon, India will be one of them, as it is preparing to raise a special operations unit to neutralise high-value targets. The Union government has green-lighted a tri-service Special Operations Division, a unit on the lines of the US Special Operations Command.

Major Gen A.K. Dhingra of the 1 Para (Special Forces) has been appointed as the SOD’s first commander. Dhingra, who was part of the Indian Peacekeeping Force in Sri Lanka, will draw manpower from the special forces of the Army, the Marine Commandos (MARCOS) of the Navy, and the Garud commando force of the Air Force. Besides the SOD, the government has also initiated the formation of tri-service commands to manage space and cybersecurity operations.

The idea to raise the SOD was suggested by a panel headed by former cabinet secretary Naresh Chandra; the panel submitted a report on formulating a national security policy in 2012. Sources said the SOD will initially have 3,000 commandos mandated to carry out jungle and sea warfare, and undertake helicopter operations to rescue Indian nationals and diplomats. Teams will have the capability to target strategic installations and high-value targets in cross-border operations.

In a ‘no peace, no war’ scenario, say experts, it will be the SOD that will first respond to any emerging or impending threat in the neighbourhood. They believe the SOD is a reflection of the government’s belief that full-scale wars will be rare and that all future battles will be fought with clinical precision through swift, targeted attacks against the enemy.

To give more teeth to the special forces, the government has also green-lighted the procurement of specialised weaponry that includes sniper rifles, midget submarines, special communication systems and thermal sights. The items will be procured from Israel, Germany, Sweden, Russia and Finland.

The government will soon appoint an air vice marshal as the head of the new Defence Space Agency, which will bring together the existing Defence Image Processing and Analysis Centre in Delhi, and the Defence Satellite Control Centre in Bhopal. Headquartered in Bengaluru, the DSA will work with the Indian Space Research Organisation and the Defence Research and Development Organisation to carry out “prompt and sustained offensive and defensive space operations to achieve space superiority”, said an officer. Experts believe that China is vulnerable in space, simply because it has more space assets than India.

The Defence Cyber Agency has been set up to further sharpen India’s offensive capabilities. Rear Admiral Mohit Gupta will head the new cyber warfare centre, which will upgrade the existing Defence Information Assurance and Research Agency. Officials say the DCA will be capable of hacking into networks, mounting surveillance operations and laying honeytraps. Expected to be based in Delhi, the agency will have a state-of-the-art lab that can recover deleted data from hard disks and cellphones, break into encrypted communication channels, and perform other complex objectives.

“New-age wars will be multi-domain wars waged in many battle spaces,” Bhatia told THE WEEK. “The new domains of cyber, space and special operations will be crucial. It is imperative that we build capabilities in these domains.”

All three units will function under the Integrated Defence Staff, which has been integrating policy, war-fighting and procurement objectives since 2001. Experts say the move is an important step in the eventual integration of the three forces, which will reduce training, logistics and administrative expenses.

“I am not claiming that this is the best arrangement,” said Lt Gen (retd) Ata Hasnain, former military secretary who commanded the Srinagar-based 15 Corps. “But, under the circumstances, it is an interim arrangement that will hopefully mature to the level of giving all three new organisations the status of a command, each under a commander-in-chief.”

According to him, the organisations will address challenges beyond conventional warfare—such as irregular warfare, terrorism and other domains of hybrid war. Lt Gen Subrata Saha, member of the National Security Advisory Board and former deputy chief of the Army, said the three close-knit special forces groups will help India get the best bang for the buck.

“The move will enhance the preparedness for the warfare of the future, where space and cyberspace have potentially great significance,” Saha told THE WEEK. “And it [the special forces] will achieve higher synergy through joint doctrine, acquisition, training and application.”