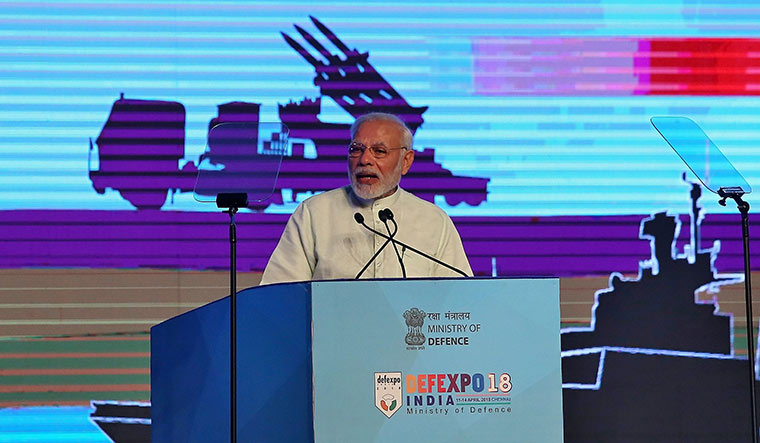 Defence mode: Prime Minister Narendra Modi during the inauguration of the DefExpo 2018 in Chennai | Reuters

Less than three months after becoming prime minister, Narendra Modi, in his address from the Red Fort on August 15, 2014, gave a clarion call for “Make in India”. From satellites to submarines, he said, “come make in India, we have steel... we have discipline, we have resolve... sell anywhere, (but) make in India.”

However, despite tall claims of moving towards self-reliance in the defence sector, India’s arms imports have shot up by 24 per cent between 2013 and 2017. No major contract under the Make in India category has really taken off and critical defence procurement happened with no transfer of technology.

Several global defence giants, including Europe’s Airbus group, America’s Lockheed Martin, Germany’s ThyssenKrupp Marine Systems and France’s Naval Group have made offers to India. Said Ashish Saraf, country head of Airbus helicopter division in India: “Airbus is planning to assemble its naval utility helicopters, including the Panther, for both domestic and export markets (including India). These helicopters are being used by the navies of 18 countries, including the US Coast Guard.”

However, these companies are yet to seal the deal. Some Indian private players, such as Adani Defence and Aerospace, Tata Advanced Systems, Bharat Forge and Mahindra and Mahindra, have tied up with foreign defence manufacturing firms, but these deals are yet to be finalised, have hit dead ends or have been cancelled.

The Reliance-Dassault factory in Nagpur has only just started making components for the Falcon 2000 jets.

“People have made huge investments and only substantial orders can help them survive. Sadly, decision making has been very slow in the government,” said a defence industry insider.

India’s spending on defence is about 1.6 per cent of the GDP. As much as 30 per cent of India’s total defence budget is spent on capital acquisitions and 90 per cent of requirements are currently met through imports.

Ever since the Modi government came to power, it has been talking of self-reliance in the defence sector. Over Rs 4 lakh crore worth of military purchases have been cleared in the past four years and the government asserts that two-thirds of the total approvals are under the Make in India category. The reality, however, is different. In the same period, only 128 contracts worth about Rs 1,19,000 crore have been signed with Indian vendors for capital procurement of defence equipment. This is just more than one-fourth of the total, not two-thirds.

Moreover, all the major contracts the Modi government has signed in the past four and a half years have been off the shelf, with no transfer of technology. This includes the 36 Rafale fighter jets from France, the S400 air defence missile systems from Russia and the attack and strategic lift helicopters (Apache and Chinook) from the US. All the products will come readymade from the foreign players, and nothing would be made in India. 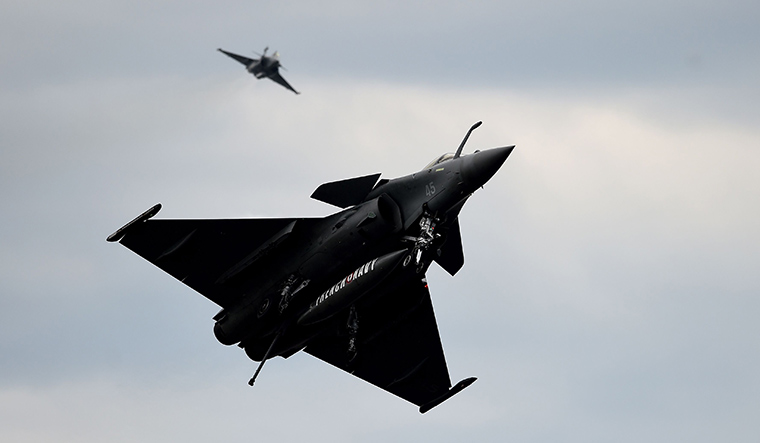 Turbulent flight: The Rafale deal has been mired in controversy | AFP

“We have to make up for the inadequacy, given the way security challenges are increasing in the region,” said Lt Gen Subrata Saha, former deputy chief of Army staff and member of the National Security Advisory Board. “[There is greater] expectation from India to be the net security provider in the Indian Ocean region. That is enlarging the scope of security challenges. Import is the only solution, at least for the time being.”

Notably, not one Indian defence manufacturing company figures in the list of the top ten global defence companies, said Laxman Behera, a research fellow at the Delhi-based Institute for Defence Studies and Analyses. Hindustan Aeronautics Limited is 35th on the top 100 list.

“Since 1990, we have been targeting to achieve 70 per cent self reliance in defence,” he told THE WEEK. “But, till date, we have managed to get only half of it. This figure will not increase as we are constantly signing major off-the-shelf contracts.”

According to an official document, however, nearly 65 per cent of parts/components/subsystems of existing systems have been de-licenced, which means India can now manufacture them. “Approximately $3 billion worth of defence items are being manufactured by the domestic private sector,” a defence ministry official said.

Interestingly, Pakistan, which is primarily dependent on China for defence purchases, has sold more weapon systems to foreign customers than India.

Talking about the status of the indigenous development of armament, a senior official gave an example. In 2007, the Defence Procurement Procedure introduced the ‘Make in India’ category and, initially, two projects were picked to test this new venture. An Infantry Combat Vehicle (ICV) and Battlefield Management Systems (BMS) for the Army were shortlisted and, after due diligence, three private companies and the Ordnance Factory Board were chosen to carry out the project. The government was supposed to cover 80 per cent of the research and development cost. But, after 12 years, the programme is nowhere near completion.

However, under the policy, the government chooses the Indian partner for a foreign firm. The Indian private sector has asked why the foreign company cannot choose its Indian partner from a list of approved names.

Regardless, several big-ticket defence programmes have been initiated under Make in India after the announcement of the strategic partnership model. The defence ministry is scrutinising proposals for six stealth submarines costing Rs 75,000 crore, and four major global players—Naval Group (France), ThyssenKrupp Marine Systems (Germany), Rosoboronexport Design Bureau (Russia) and Saab Kockums (Sweden)—have expressed interest. There are similar Navy and Air Force projects on the anvil. But there is still a long way to go.

Moreover, Saha said that only nine defence public sector undertakings and 41 ordnance factories were ruling domestic military hardware production, providing less than 40 per cent of the defence equipment supplied to the armed forces.

In an alarming report, the Comptroller and Auditor General in 2017 said 55 per cent of the ammunition stock of the Indian armed forces was below the minimum acceptable risk level and 40 per cent was at a critical level and would run out in ten days, Saha said.

Another view is that defence procurements ranging from PT shoes to fighter aircraft are mired in allegations and counter-allegations, which have led to eventual freezing of the process. “Such allegations have a collateral effect on other programmes, making the process more complex,” an official said, while indicating that officials hesitate to write anything on the file fearing backlash. “To an extent, unnecessary hue and cry discourages both domestic and foreign industrial partners.”

India became the fifth-largest defence spender in 2017 at $52.5 billion, up from $51.1 billion in 2016. With such high import dependence, modernisation plans are difficult to sustain.

In the short term, said Saha, six aspects needed immediate attention—competency mapping of the private sector, development of capabilities of micro, small and medium enterprises, faster procurement cycles, self-certification to save time and synchronise procurement cycles with technological cycles, introduction of an end-to-end digitised procurement system with accountability and timelines strictly defined, and a concerted drive to leverage India’s strong IT industry for defence.

In the medium to long term, he said, time-bound production targets must be supported by timely procurement with budgetary support. Over time, the acquisition structure must be managed by specialists, with services creating their own cadre of technology leaders who understand the requirements and technology.

The government’s thrust is evident from the two defence industrial corridors—Tamil Nadu and Uttar Pradesh—and the launch of the Innovations for Defence Excellence. A defence planning committee has been constituted under National Security Adviser Ajit Doval, with the three service chiefs, and the foreign, defence and expenditure secretaries. The committee is expected to prioritise modernisation of the armed forces.

Jayant Damodar Patil, the Larsen and Toubro defence head, is supportive of Make in India in defence. He said that, since 2014, of the total programmes cleared for acquisition, the private sector has been allowed to compete for about 35 per cent of them by value. This figure was below 5 per cent in the preceding five years. “By 2025, the share of manufacturing in India’s GDP is targeted to grow from 17 per cent to 25 per cent,” he said. “To reach 25 per cent in a decade, the manufacturing sector needs to grow at a compound annual growth rate >14 per cent. Make in India can play a major role in achieving this.”

Patil, however, has a grudge. Private players, he said, felt that there was still a continued bias towards PSUs. “It is worrying that the private sector continues to be denied opportunities to bid. It prevents them from gaining maturity. This was the genesis of the strategic partnership model, but even this is on the verge of being changed to allow the public sector to participate.”

Ashish Rajvanshi, head of Adani Defence, is more optimistic. “With the exception of a few programmes of an extremely strategic nature, most programmes have been under Make in India,” he said. “This has been the case for large multi-billion dollar programmes as well as smaller programmes. Most conversations with the global OEMs have also been made through Make in India, where they have been asked to make the equipment in India with either one of the PSUs or a private sector manufacturer. This change in mindset from imports to talking about defence manufacturing has been the biggest benefits of Make in India. In spite of several roadblocks, the Indian private sector has achieved a significant level of maturity in locating, acquiring, absorbing and then executing on the transfer of technology from foreign sources. For this to flourish, the defence ministry has to let them prosper, which can only be possible through commercial orders.”

Behera said that before 2014, the private sector was there, but was only a marginal player. Over the years, India seems to have realised that the defence PSUs have their limitations and they cannot produce everything the armed forces want. So, the private sector had to be brought in.

“The Make in India initiative has simplified the policies for private players,” he said. “They have streamlined the DPP provisions from licencing to the basics. On the policy front, the Modi government will get 10/10 for bringing these reforms. Where it has not succeeded so much is in the implementation.”

The Modi government inherited an economy that was not doing very well, he added, and steps like demonetisation and GST halted economic growth. He said that big contracts had not been signed because the government did not have money and the Rafale controversy had slowed down the process. “Only a few small contracts were given to the private sector,” he said. “I believe more could have been done.”

He said the implementation had been very slow, but added that the next government will reap the benefits. “The private sector will forget all reforms until they get actual contracts or orders,” he said. “With the absence of the required budget and the burden of committed liabilities, the government could not do much to boost Make in India in defence.”

Rahul Chaudhry, chairman, Defence Innovators and Industry Association, a conglomerate of small and medium defence companies, said, “Without the defence industrial base being nurtured through real orders, Make in India in defence remains a jumla.”

Chaudhry, who headed Tata Power Strategic Engineering Division till a few months ago, added that the industrial base could only be built by engaging the Indian industry. “This will be more expensive in the short run compared with imports, as factories have to be built and capex spent,” he said, “but it will create jobs and boost our economy.”

A defence ministry official looking after acquisition said: “Make in India in defence has never been an easy task as it requires niche and state-of-the-art technology. Moreover, global leaders of defence manufacturing will never allow any country to promote indigenous industry. Wait for some years. The situation will completely change.”