They hope the political apathy towards Muslims ends this election 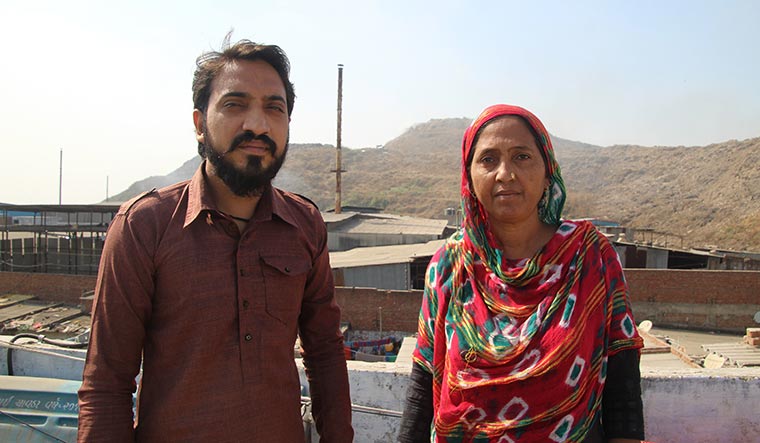 Seeking change: Mustakin Saiyed with mother Reshma and the mountain of garbage behind them | Janak Patel

A WORLD HERITAGE CITY, Ahmedabad boasts many places of tourist interest, including the Gandhi ashram, Sabarmati riverfront and Science City. Situated in the plains, it also boasts of a mountain―Pirana. Formed not by natural forces but by human waste, Pirana is a municipal dumping site. At the foot of this mountain of garbage, where the very act of breathing poses health risks, live hundreds of families, in a colony with an ironic name―Citizen Nagar.

Mustakin Saiyed, 25, and his family had moved to Citizen Nagar from a relief camp after fleeing their Naroda Patiya home during the post-Godhra riots of 2002. Today, Mustakin is father to a two-year-old girl. He dropped out after class three, but hopes his daughter will get proper education. It is a hope that hinges on a future far removed from his present reality.

Mustakin has been unemployed for two years now. He had a tailoring job, but the Goods and Services Tax followed by Covid-19 spelt doom for his workplace. His father, Nadeem, had to stop working as his lungs had given up after breathing in the toxic air around them for years. “We haven’t even been able to repay the loan for the breathing aid that we bought for our father,” said Mustakin. His mother, Reshma, said they would flee this place, if they had a choice.

Mustakin squarely blames the BJP for the situation his family is in. A first-time voter, he said the party did nothing all these years. “I will vote for Arvind Kejriwal,” he said.

Muslims constitute merely 11 per cent of the 6.5 crore population in the state. The Muslim vote can make a difference in 25-odd seats in the 182-seat assembly. But political parties are hardly wooing the community. While the Congress has fielded six Muslim candidates and the AAP two, the BJP has none to its name. It is said that the BJP indirectly supports independent Muslim candidates in the seats where the community has a sizeable presence. This is to eat into the Congress votes and make it easier for the BJP candidates to win.

Faizan Saiyed, like Mustakin, is a first-time voter. The 20-year-old, too, had lived in a relief camp―he was born there. Unlike Mustakin, he was able to study till class 12, but failed to clear the examination. He, along with his mother and siblings, moved to a new house just a little away from Citizen Nagar.

Faizan said that he did not get any of the scholarships promised to riot victims. He did a two-wheeler repair course from an industrial training institute. He now works as a manager in a garment unit and earns around Rs12,000 per month.

Faizan is among a large number of voters who have seen the BJP in power since birth. Things have not changed for us, he said. However, he is willing to give the BJP another chance.

While political parties did not come through for the community, voluntary organisations and philanthropists did. Rifa Mansuri, 20, is one such beneficiary. A resident of Juhapura, one of the largest Muslim ghettos in western India, she is doing her chartered accountancy articleship. While she was lucky to get support for further studies, many, she said, were not as fortunate and had to drop out because of poverty. “Education should be made affordable for all,” said Rifa, who wanted to do MBA but could not because of the exorbitant fees.

Rifa, for one, is for a party that works more and talks less. A simple ask, but an uphill task for the political parties concerned.