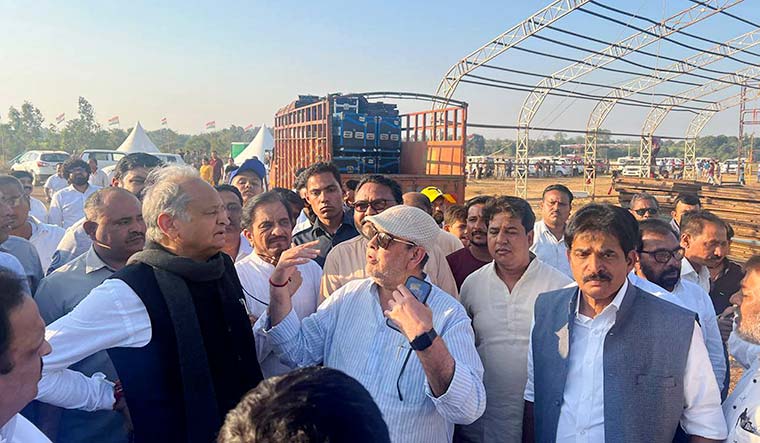 A LOT HAS changed for the Congress in Gujarat since the assembly polls in 2017, when it carried out a feisty campaign led by Rahul Gandhi. It won 79 seats and 41.1 per cent votes in a close contest with the BJP. It was the party's best performance in three decades, a period which witnessed the BJP's unbroken reign.

In stark contrast, the Congress's electioneering is conspicuously low profile this time, prompting Prime Minister Narendra Modi to warn his partymen about a 'silent campaign'. Rahul, who is busy leading the Bharat Jodo Yatra, may make only a guest appearance in Gujarat.

Amid a sea change, a constant for the Congress in Gujarat is veteran leader Ashok Gehlot. In the electoral contest where the Gujarat model is the BJP's main plank and the Delhi model the AAP's, the Rajasthan model is playing a predominant role for the Congress in more ways than one. Gehlot is leading it in his capacity as Rajasthan chief minister and senior observer supervising the party's campaign. His trusted lieutenant Raghu Sharma is the AICC in-charge of the state, and leaders from Rajasthan have been pressed into service in every constituency. On offer are promises like bringing back the old pension scheme, free hospital care for accident victims, free medicines and insurance cover.

The campaign crafted by Gehlot and team this time is different from the high-voltage electioneering of the party in 2017. There is a conscious effort to prevent the election from turning into a Congress versus Modi contest. While avoiding attacks on Modi, the party is targeting the BJP's state leaders. The party also wants to steer clear of the debate on hindutva and communal polarisation.

While the BJP and the AAP are engaged in a relentless war of words and the Congress may appear to be missing from the scene, party leaders insist that they have been busy engaging with the people, away from media glare. They say the focus is on going local by carrying out a door-to-door campaign and holding neighbourhood meetings. Also, the party is working to strengthen its presence at the booth level.

The Congress launched five yatras on November 1, each covering one of the five zones in the state and traversing around 5,500 km. The plan is to hold some 200 public meetings and rallies. “The common man is under severe distress,” said senior Congress leader Arjun Modhwadia. “The prices of all essential commodities have skyrocketed. However, incomes have been hit and people have lost their jobs. The state government, instead of providing relief to the people, is more concerned about issues such as the uniform civil code.”

The Congress has traditionally done better in rural areas than cities, and in this election it is investing its energy and efforts in traditional strongholds. In the last polls, the BJP had won 55 out of 73 urban seats, while the Congress had won 62 out of the 109 rural constituencies.

A state leader said the party had turned to its original KHAM formula, which involved a coalition of the kshatriyas, other backward castes, harijans, adivasis and Muslims.

As the Congress claims to have gone back to the basics, there is concern about the entry of the AAP into the arena, which has made the contest a three-cornered one and hence unpredictable. The AAP's growth has always been at the cost of the Congress, but in Gujarat, the BJP, too, has reasons to be wary as it could harm the party's prospects in the urban areas.

Since 2017, the Congress has witnessed an exodus of leaders and MLAs to the BJP, and it is still happening. Those who have left the party include the poster boys of the agitations against the state dispensation such as Patidar leader Hardik Patel and the OBC face Alpesh Thakor. Also, the 2017 polls were held in the backdrop of the widespread protests for Patidar reservation and the outrage over widespread crimes against dalits, while there is no such emotive issue this time.