Qatar World Cup: What the Portuguese think about Ronaldo and their team

Head coach Fernando Santos, who won Euro 2016, is not popular among fans 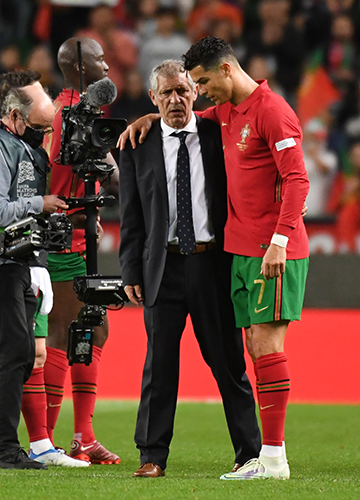 There was relief inside the Estádio da Luz, Lisbon, in the 83rd minute of the final match of Portugal's World Cup qualifying group. The home team needed a draw to secure direct qualification and Serbian marksman Aleksandar Mitrović had just headed wide at 1-1. However, the relief lasted only seven minutes. Just before the final whistle, Mitrović buried a header into the Portuguese goal, clinched Serbia's World Cup berth and sent Portugal into the playoffs.

Four months later, Portugal booked its Doha tickets at the Estádio do Dragão in Porto with a brace against North Macedonia―which beat Italy, keeping it out of the World Cup for the second consecutive time. The 22nd edition of the World Cup will only be Portugal's eighth appearance. The team first qualified in 1966, and, inspired by the heroics of Eusébio, finished third―its best finish to date. It then had to wait 20 years for its second appearance, and, then, another 16 for its third.

But, the golden generation, led by Luís Figo and Rui Costa, had elevated Portuguese football in the 1990s. The decade ended with a semifinals appearance at Euro 2000. This was followed by a return to the World Cup in 2002, second place at Euro 2004 and fourth place at the 2006 World Cup. By the time the golden generation signed off, Cristiano Ronaldo had arrived. Portugal has not missed a major tournament since the turn of the millennium.

Going into Qatar 2022, the team is ranked ninth. It has won its first two international honours―Euro 2016 and the 2019 UEFA Nations League―and has produced a host of top-class talent. In fact, manager Fernando Santos has spoken about how the task of selecting 26 players for the World Cup squad is a “good headache”. The lacklustre showing at Euro 2020 still rankles, but fans are looking forward to the World Cup and the squad announcement, expected to be on November 10.

“We need the experienced players, because football is also about experience and who knows the World Cup better than Rui [Patrício], Pepe, and, of course, Ronaldo,” says Hamza Salahuddin, who plays as a striker for the football team of the University Autónoma de Lisboa. Santos almost certainly agrees with Salahuddin's view. A conservative manager, who was a defender in his playing days, Santos will not want to leave out any of the senior players.

He might have orchestrated both of Portugal's international triumphs, but Santos is not a fan favourite. Paulo Tinoco, an architect and town planner at the municipal parish of Lisbon, says that he never missed Portugal's matches because, irrespective of the result, there was exciting football. “But, after the arrival of Santos, it is terrible to watch them play,” says Tinoco, who is a member of Sporting CP, the club which produced Ronaldo.

Tinoco admits that Santos is a “competent and cautious” coach, but says that he needs to perform better. Pedro Pinto, a retired physical education trainer, says that although Santos is widely respected, he is often criticised for undue caution and for lacking in strategy or vision. “He would not be regarded as the best Portuguese coach by many in Portugal,” says Pinto.

The frustration with Santos's approach is also a byproduct of the talent pool now available to the national team coach and the higher number of creative and flair players that Portugal has produced in the past decade. The current group is without doubt the best squad since the mid-2000s. The depth will come in handy for Portugal, which is facing a few injury worries. 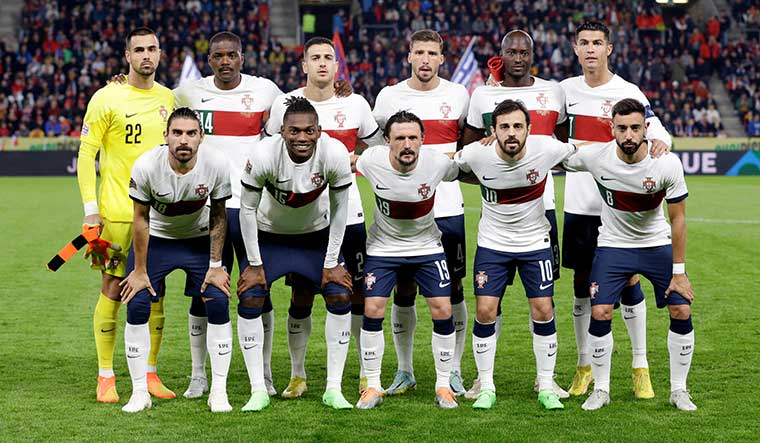 Stronger group: The team on September 24. Portugal has produced many quality players in the past decade | Reuters

Defenders Pepe, 39, and Nuno Mendes are expected to recover in time. But, attackers Diogo Jota and Pedro Neto have both been ruled out. “Neto continues to have awful luck with injuries,” says Antonio Pedro Mendes, a sports nutritionist at FC Porto. “He shattered his kneecap in April (2021) and [recently] injured his ankle ligaments, requiring surgery. The main concern is to avoid any further injuries.”

With regard to what Santos's preferred starting 11 could be, the goalkeeping position will, perhaps, be most interesting. Diogo Costa, 23, should be starting ahead of the 34-year-old Patrício. But, his lack of experience on the big stages may work in the veteran's favour. The defence should be João Cancelo, Rúben Dias, Pepe and Nuno Mendes. Alternatively, the in-form Diogo Dalot can start instead of Mendes and Cancelo could be moved to the left flank.

The midfield could comprise Rúben Neves, Vitinha and Bruno Fernandes. However, William Carvalho is one of Santos’s favourites. He can play in both the midfield and defence, and could well feature instead of one of the players mentioned above in either of the positions. The attack is likely to be Bernardo Silva, Ronaldo and Rafael Leão.

Ronaldo, despite his well-documented recent troubles at club-level, is the main man upfront. He is the top goalscorer in international men's football with 117 goals in 191 games, till the end of October. Also, if he scores in this World Cup, he will become the only player to have scored in five different editions. Despite the noise about the “decline” in his overall game, it is clear that the 37-year-old remains one of the world's best. What could be a worry is that many of his shots this season have not been composed; a sign that the pressure of a relatively barren spell is getting to the great.

There is still abundant faith in him among his countrymen. “It is true his performance in club matches is not so good, but for the country, he is on another level,” says Pedro Anibal, a civil servant. “He is always passionate to play for Portugal, and also, he seems disturbed because he has not earned the big cup yet and his career is going to end.” Antonio Pedro Mendes, the sports nutritionist, says that Ronaldo is ageing like fine wine. “He continues to defy the odds with the state of his body,” he says. “He possesses the physicality of a player half his age. There is no doubt about his fitness, I believe he can even go to the 2026 World Cup.”

But, there are also those who seek to play down his importance, like Ricardo Moreira, who runs an auction company. “A few years ago, things would have been different,” he says. “But that is not the case now. We have an arsenal of players and, of course, he is a key player, but the team does not depend solely on him.” Vasco Mascarenhas, player and student at ISCTE University Lisbon, says: “If a team depends on one player, it will lose. And, we have played without Ronaldo and won, too, like in the final of Euro 2016, when he got injured.”

And, as with almost all things in life, there are harsher opinions, too. “The fact that Cristiano Ronaldo will still start for Portugal in 2022 defies all logic,” says Gonçalo Miguel, an u-19 player at lower division football club Grupo Desportivo Fabril. “Not when João Félix, Rafael Leão and a bunch of other brilliant players are waiting. I do not think less of him, but we must acknowledge that he is no longer the same.”

It is true that this squad has enough quality players to perform well even if Ronaldo is not firing. The problem then becomes Santos's pragmatic approach. Portugal is in a tricky group with Uruguay, South Korea and Ghana. All those teams are capable of getting a result against Portugal, especially Uruguay. So, even getting out of the group may not be straightforward.

What then would be a realistic target for Portugal? “Winning the cup is difficult, but I would not say it is impossible,” says architect Paulo Tinoco. “But with the current coach, it is hard to say. I believe we could reach the semis.” Fabio Ferreira, a research student at New University Lisbon, says there are teams which are in better form. “So, in order to win the cup, surpassing them will be major trouble,” he says. “Also, we face Uruguay in the group stage. But I think for sure they will clear the round of 16.”

There is much maturity in the way the Portuguese are approaching the tournament. But, just under the surface, there also seems to be quiet confidence.