This FIFA World Cup, several players will bring their politics to the pitch

They will support human rights, LGBTQ rights and also Ukraine and Iranian women 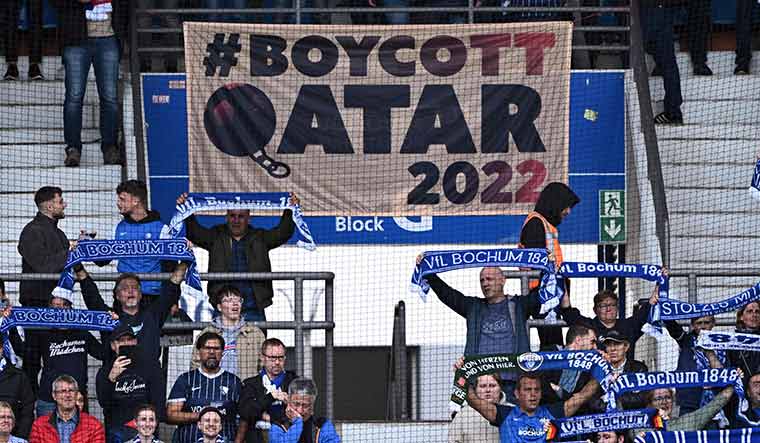 No ball: A sign at a Bundesliga match in Germany on October 23 | AFP

An angry Irishman is said to have kicked it off. The practice of using a sports event to voice one’s politics. It was in 1906, at the Intercalated Games―held between Olympics, but matching the scale―that Peter O’Connor won silver in long jump. He was miffed for two reasons. One, that he did not win gold. Two, the flag that he stood under was the Union Jack. As Ireland did not have an official Olympics council, the athletes had to compete under the British flag. He added high jump to his repertoire that day as he leapt up the flagpole to replace the British flag with the Irish 'Erin go Bragh'.

More than a century later, we find ourselves on the cusp of possibly the most politically charged championship of all time, at least in a performative sense. This is primarily because of who is hosting this tournament―an Arab nation with no real footballing culture, and one that makes the west’s moral compass go haywire.

Human rights were the sticking point when Qatar got the go-ahead in 2010 to host the World Cup. Twelve years later, it still sticks. A recent Amnesty International poll found that 84 per cent of fans who plan to attend at least one World Cup match think that FIFA should compensate workers who suffered during the preparations in Qatar.

The remonstrations had begun during the qualifiers last year. The Dutch players had worn shirts emblazoned with the words “Football Supports Change”. The Norwegians had “Human rights, on and off the pitch” on their jerseys. The Germans were more creative; they had black shirts, each with one white letter to spell out “HUMAN RIGHTS”.

Now, yoked together in their wokeness, several players and teams have decided to let their objections known come November 20.

To start with, the Danish team has decided to “mute” itself on the pitch.

The national team badge, the logo of kit maker Hummel and the white chevrons have been blended into the colour of the jersey. “We don't wish to be visible during [the] tournament,” Hummel said. “We support the Danish national team all the way, but that isn't the same as supporting Qatar as a host nation.”

Apparently, the Danish players would not be travelling with their families to Qatar; the country’s football body doesn’t want to “contribute to creating profit for Qatar”, it said in a statement.

The “protest kit” aside, the Danish captain will be wearing a rainbow-coloured armband in a show of support to the LGBTQ community. As homosexuality is a crime in Qatar, reportedly eight of the 13 European teams have asked FIFA if their captains can wear rainbow armbands as part of the “One Love” campaign.

Fans, too, could face unsavoury situations in and around Doha. While FIFA’s inclusionary policies allow for the display of the rainbow flag in the stadiums, it has no jurisdiction on the streets.

Not to mention the rowdy, boozed-up fans of some teams, and their post-game antics. The Qataris are known to be a quiet lot, and a pint is not a political point. Heightened senses, however, could lead to a clash of cultures on the streets.

Notably, it is not only those in Qatar who want to make a point. So pissed are some local governments in the UK and France that they will not set up fan zones to screen the games. And, France are the defending champions.

Also, it is not only against Qatar that statements are promised. With the Ukraine war still on, Polish captain Robert Lewandowski will reportedly wear a yellow-and-blue armband to show solidarity with the Ukrainians. Some Iranian players are apparently planning to show their support for the women protesting in their country. Iranian forward Sardar Azmoun, when asked whether this could cost him his place in the side, wrote on Instagram, “That is worth sacrificing for one strand of Iranian women’s hair. Shame on you who kill people so easily. Long live Iranian women.”

FIFA regulations say political expressions have to be cleared beforehand; if not, the officials can stop or even call off the match. “Differing perspectives are encouraged and fans will be free to express themselves during the World Cup, as they have done during other events hosted in Qatar,” a Qatari government official told the Associated Press recently.

Those in the pro-boycott camp say Qatar bribed its way into hosting the tournament (even more so than previous hand greasers), that it is a “dictatorship”, and that it abused those who built the stadia. Those on the other side of the fence say that corruption is endemic in the sport (why single out Qatar?), that progress―though glacial in many eyes―is happening, and that dialogue and engagement are the only way forward.

Advocates are fierce on both sides, but the jury is out on whether such protests actually work. Qatar, notably, does not use the jury system.