Qatar World Cup: Why Europe's best are not hot favourites 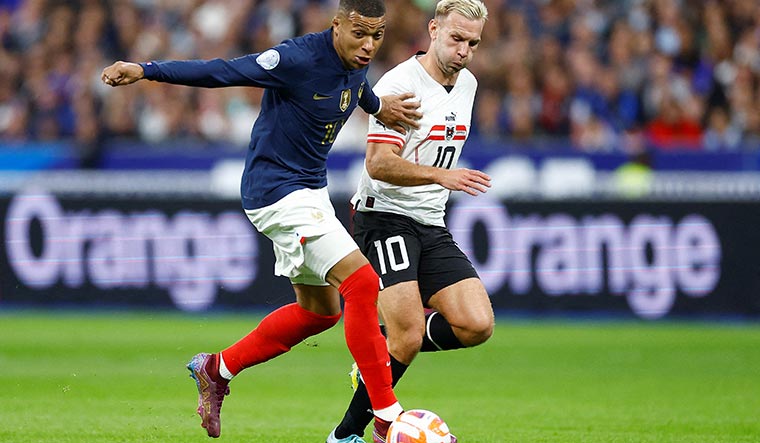 Difficult run: Kylian mbappé against austria on september 22. The match saw France's only win in its last six games | Reuters

It could well be a superstition, but there is something called the champion's curse. Only two teams have ever defended a World Cup title―Italy (1934, 1938) and Brazil (1958, 1962). But, it is intriguing that four consecutive World Cup holders from Europe have crashed out in the group stages. The trend started with France at the first World Cup in Asia in 2002.

Twenty years later, France arrive at the second World Cup in Asia as holders. Will the curse hit them again? The signs are all there. For one, high-profile French players have suffered injuries. Centre-back Raphael Varane may not start and the World Cup-winning midfield duo of N’Golo Kante and Paul Pogba are both out. But, an incredible talent pool will still enable France to field a strong team.

The bigger concern for head coach Didier Deschamps is form―the team, ranked fourth, has won only one of its last six matches. At Qatar, France will be joined by Denmark, Australia and Tunisia. Not the scariest looking group. But, in 2018, France made hard work of a nearly identical group―drawing with Denmark (0-0), needing an own goal and a penalty to beat Australia 2-1 and scraping through a 1-0 win against Peru. 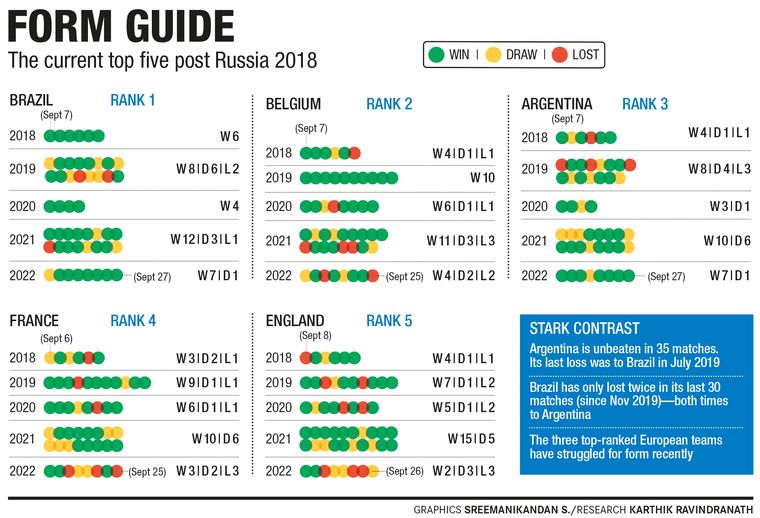 Denmark (rank 10) beat France twice in recent months. If France fails to finish top, it could come up against Argentina in the round of 16. Not ideal, in the current scenario. However, despite recent struggles, France is among the bookmaker’s favourites and multiple experts have predicted that it will finish runner-up to Brazil.

Belgium (rank 2) is the world’s top-ranked European team. But, its “golden generation” is greying with only a bronze (Russia 2018) to show for its efforts. Goalkeeper Thibaut Courtois and midfielder Kevin De Bruyne are world-class. Other big names like captain Eden Hazard and record goalscorer Romelu Lukaku are struggling at club-level, but are trusted by head coach Roberto Martínez.

The team has lost twice to the Netherlands in recent months and has been held by Wales and Ireland in 2022. It has been drawn with an in-form Croatia (rank 12), Morocco (the second-best ranked African team) and Canada. Even if Belgium secures the top spot, it is likely to face Germany or Spain in the round of 16.

Though Spain and Germany are expected to progress to the round of 16, the other two teams in the group―Japan and Costa Rica―are both capable of fierce resistance and swift counterattacks. Spain (rank 7) was beaten by Switzerland (rank 15) in September, but has otherwise been good this year (five wins and two draws). Germany―the disgraced holders from 2018―have slipped to 11th rank and was beaten by Hungary in September. The team’s form has been underwhelming in 2022 with five draws, but its two wins included a 5-2 thrashing of sixth-ranked World Cup absentee Italy.

The Netherlands (rank 8) is in the best form among the traditional European powerhouses. The team has been unbeaten in 15 games (11 wins) since its exit from Euro 2020 last year. It is expected to top its group despite the challenge from Senegal, the top-ranked African team (18), especially because the other two teams in the group are underdogs―Ecuador and Qatar. However, it is likely to get an easier knockout phase path if it finishes second. Ironie, as the Dutch would say.