Naveen Patnaik has recently shifted his focus to everything spiritual 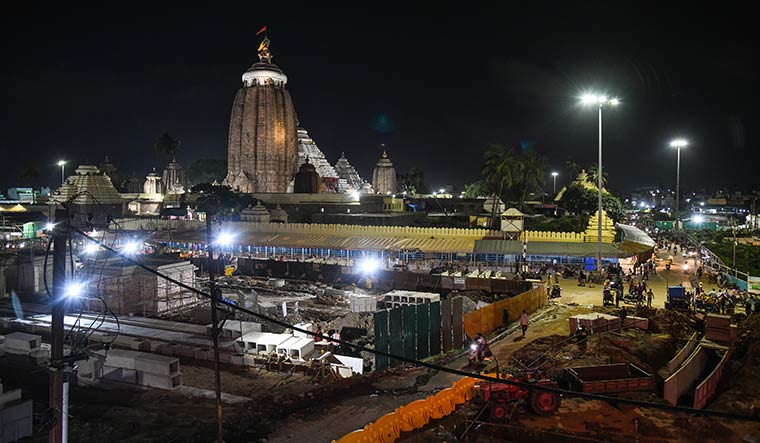 Holy facelift: The Shree Jagannatha Temple corridor is expected to be completed by next June | Sanjay Ahlawat

The space around the Shree Jagannatha Temple is clearer than ever. As part of an ambitious heritage corridor project—the Shreemandira Parikrama Project—a 75m circle around the shrine has been cleared of buildings, and the holy site, with its 65m vimana, is now visible from far away.

The congested lanes, where vendors, Pandas, beggars and devotees jostled for space, have breathing space now.

Ever since he was sworn in for a record fifth-term as chief minister, Naveen Patnaik has shifted his focus to everything spiritual. This could be because he believes his people’s basic needs are met and wants to do more (Maslow’s hierarchy of needs, say his confidants) or it could be a clever move to checkmate the BJP’s cultural politics. Last year, Prime Minister Narendra Modi inaugurated the Kashi Vishwanath corridor in Varanasi.

The Odisha government has already revamped several other shrines, including the Lingaraj Temple in Bhubaneswar, but the scale of the Puri project makes it one of India’s biggest temple plans.

The Rs3,200 crore project began in 2019 and is expected to be completed before the next Rath Yatra in June 2023. It involves 22 aspects including land acquisition, rehabilitation work, road improvement, building of cultural centres, revival of lakes and development of the cremation ground.

Of the 75m circle, the first 50m will be a traffic-free zone for devotees, and will have landscaping, walkways and locker rooms. The next 25m will have light traffic for those living around the temple. “It will provide the pilgrims with a good experience and enhance Puri’s tourism potential across the world,” said Puri collector Samarth Verma.

The project has had some hiccups, too. People had protested the relocation, and the digging around the temple to lay sewer lines. They said it would endanger the structure, built in 1161. The Archaeological Survey of India had objections, too. However, the Supreme Court dismissed the PILs.

“The biggest concern of the people was that their families had lived around the temple for generations, and had woken up to the sight of fluttering temple flags from their windows,” said sub-collector Bhabataran Sahu. “It required a lot of counselling and cajoling to convince them to take the rehabilitation and resettlement. For shops to be relocated, we even paid salaries to those they employed.”

In all, the state government acquired 15 acres, including land owned by several maths—the king (symbolic title) of Puri had allotted them the land. One of these is the Uttar Parswa Math, helmed by Mahant Narayan Ramanujandas. Now in his late 50s, he was brought here by his guru when he was two. “We supply curd every day for the daily ablutions of the deity,” he said. While he refused to reveal the exact amount his math received as compensation, he said his math, along with two other maths, gave five acres for the project. As these maths were old temples, they were allowed to remain.

Most of the demolition work is now over and construction is happening at a frenetic pace. Shiba Mohapatra, a fourth-generation tailor, said, “Every flag hoisted at the temple is made by us. We have shifted from cotton to satin flags as they are lighter. We will be moved away from the temple and there might be loss of work, but we are happy with the package.”

According to government figures, Rs372 crore has been paid in compensation to 115 families, 512 shop owners, 24 lodges, 17 maths and some encroachers and street vendors.

The state has reportedly gone above and beyond the compensation mentioned in the 2013 Land Acquisition Act. For example, a person who would have gotten Rs1.5 lakh as compensation for his house (according to the Act) was given up to Rs30 lakh as a one-time payment.

In support of the project, officials cited the Justice B.P. Das commission’s interim report of 2017, which suggested that the security around the temple be increased in view of terror threats, and a proper plan be implemented to prevent frequent stampedes.

To undertake such a project, the centuries-old temple town needed the political heft of a chief minister who has ruled for 22 years. In the end, not only would the redevelopment give India a clean, world-class destination, but it would also add a lot to Patnaik’s growing legacy.